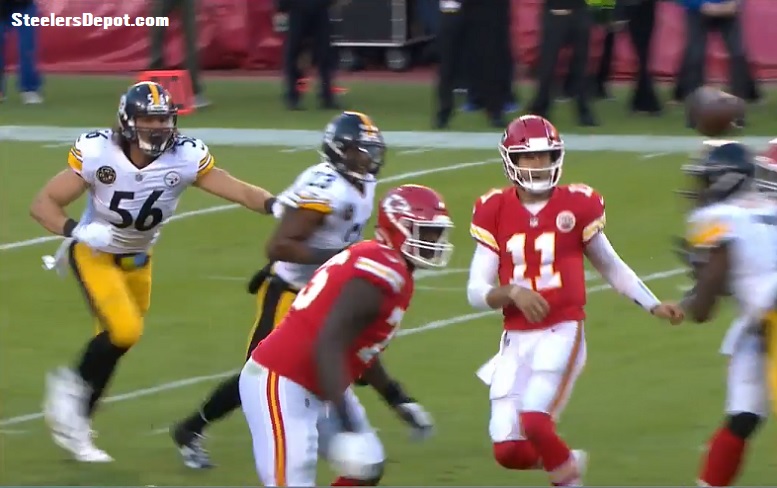 Pittsburgh Steelers safety Mike Mitchell was flagged for roughing Kansas City Chiefs quarterback Alex Smith in the third quarter of Sunday’s game at Arrowhead Stadium and it will now be interesting to see if the veteran defensive player will be fined for his actions this coming week.

The play happened with 16 seconds left in the third quarter and it included Mitchell falling into the back lower legs of Smith just after the quarterback had gotten rid of the football to running back Kareem Hunt after avoiding pressure on a third down and 8. Smith wasn’t happy with Mitchell’s actions after the play was over and the two players exchanged a few words. Smith talked about the hit by Mitchell after the game was over

“Certainly when I got fired up, I thought [the hit] was pretty late,” said Smith, according to Adam Teicher of ESPN.com. “I mean, when you get hit in the back of your knee like that, I didn’t understand how that happened. Certainly guys falling, rushing the quarterback, I get it when it’s happening from the front and guys are trying hard. That one to me just seemed so weird to get hit that low coming from behind.”

If you look at the replay of that hit by Mitchell it looks like his fall into the back of Smith’s legs may have been a result of him being pushed from behind by Steelers outside linebacker Anthony Chickillo. Mitchell claimed that was the reason for his low hit on Smith after the game.

“Clearly pushed in the back, and I didn’t even wrap because I wasn’t even trying to make contact with him,” Mitchell said, according to Chris Adamski of the Pittsburgh Tribune-Review. “It was just a tough play. We got out of it though.”

Mitchell went on to say that Smith was indeed upset with him immediately following the hit.

“I walked up to him afterwards and said, ‘C’mon, bro. I have known you for a long time. We don’t do that,'” the Steelers safety reportedly told the media.

Luckily for Mitchell and the Steelers, the Chiefs red zone drive ultimately ended in no points scored as Kansas City failed on a fourth down and 2 play from the Steelers 4-yard-line.

We’ll now wait and see what the NFL thinks about Mitchell’s hit and odds are probably good that the Steelers safety will have his weekly pay docked for his actions. If indeed fined, you can expect Mitchell to appeal.

#Steelers Poll: Was S Mike Mitchell's low hit from behind on QB Alex Smith a result of him being pushed from behind? https://t.co/BLUp7OZaD4