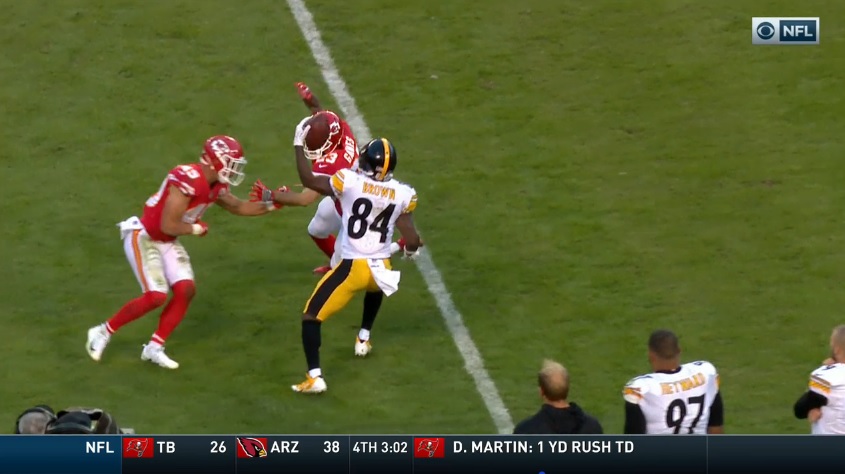 After a week of soul searching and tirade, the Pittsburgh Steelers did what no other team in the NFL has done – beat the Kansas City Chiefs. Their secret formula for success was not riddled with equations and rocket science but rather a simple technique, one that the Steelers have called on many times before. Feed Le’Veon Bell, let Ben Roethlisberger and Antonio Brown handle everything in between and let the defense run wild.

If there’s one running back who has had the Chiefs number recently it’s the Steelers’ Bell. After rushing for 314 yards in two games against the Chiefs last season, Bell added another 184 rushing yards today while scoring the one of the Steelers’ two touchdowns.

Saying that the Steelers’ defense dominated the Chiefs’ offense throughout the first half may be an understatement. The NFL’s top offense did not get their first 1st down until 1:46 left in the second quarter. Heading into halftime the Steelers limited the Chiefs offense to just six net yards, the Chiefs’ lowest total in a half since Week 14 of 2011.

While the unit as a whole impressed, the standouts were Vince Williams, who finished with two sacks on the day and Artie Burns, who played with immense confidence throughout the day.

While the defense stood their ground for majority of the contest they were put in for a scare when Alex Smith found De’Anthony Thomas for a 56-yard touchdown midway through the fourth quarter. Smith escaped pressure all afternoon but was able to scamper away and find Thomas for a touchdown on the scoring play. This would cut the Steelers’ lead to 12-10.

The Steelers answered right back off an absolutely heroic play by Brown on a crucial 3rd and two. Running up the sideline, Brown was able to reel in a deflected pass with one hand before heading off to the end zone for a 51-yard touchdown pass. Brown finished the day with eight catches for 155 yards.

Though the Steelers were now up in front 19-10, the Chiefs did not take their foot off the gas. With Smith leading the charge, the Chiefs drove right back down the field to tack on another Harrison Butker field goal to make it a one score game at 19-13.

With the Steelers’ victory over the undefeated Chiefs, the team will move to 4-2 and undisputed first place atop the AFC North. Next up for the Steelers is an inner divisional matchup against the Cincinnati Bengals next Sunday at 4:25 EST.