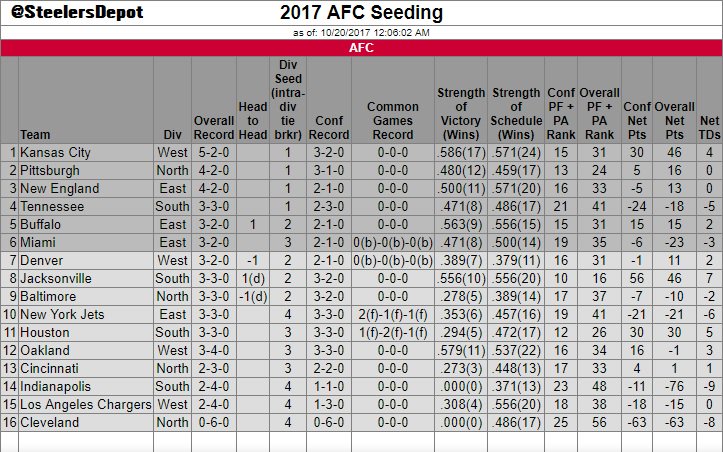 With a win Sunday at home over the Cincinnati Bengals the Pittsburgh Steelers will be the new No. 1 seed in the AFC entering Week 8 of the 2017 NFL regular season.

Thursday night the Kansas City Chiefs lost to the Oakland Raiders 31-30 on the final play of the game and that drops them to 5-2 on the season. The Steelers, on the other hand, enter their Sunday game against the Bengals with a 4-2 record and they currently own tie breakers over the Chiefs due to them beating them in Kansas City this past Sunday.

The New England Patriots can also move to 5-2 on the season on Sunday by beating the Atlanta Falcons at home. The Steelers, however, would own tie breakers over the Patriots in the AFC. At best, the Patriots would remain the No. 3 seed in the AFC with a win Sunday combined with a Steelers win due to them losing to the Chiefs back in Week 1.

A win Sunday over the Bengals would also give the Steelers a 3-0 record against teams in their own AFC North division. The Steelers opened Week 7 as 6-point home favorites over the Bengals and that line has since dipped to 5.5-points on most of the betting site boards.

The Steelers will play the Patriots later this season in a Week 15 game that will be played at Heinz Field in Pittsburgh.