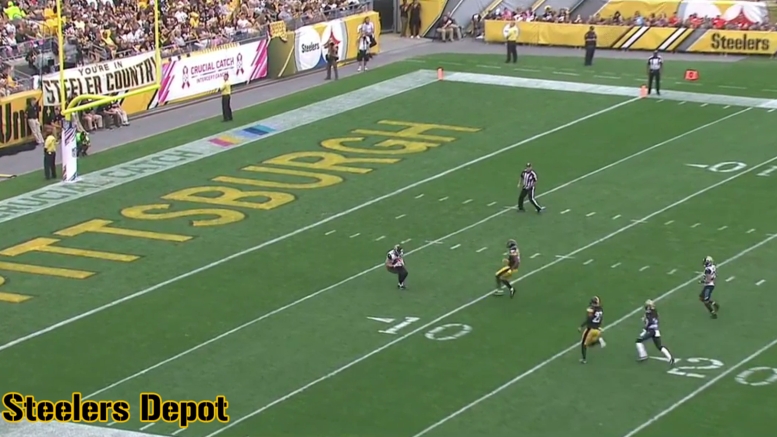 I think you know what time it is. It’s Friday, so that means (more likely than not for the next few months) that it’s special-teams fun time. in what is not even remotely a twist, today we will look at the Pittsburgh Steelers’ performance on Sunday against the Jaguars.

The jammers have been pretty consistent for a few weeks now in using Artie Burns and Coty Sensabaugh in those roles. Joe Haden was playing in place of Sensabaugh early on, but that experiment ended quickly. Neither of them held up their man on the first, 42-yard punt of the game, forcing a fair catch by Antonio Brown.

L.J. Fort was about a foot shy of coming up with a block on that one, too. He made a valiant, diving effort.

No changes from last week on the field goal unit with Stephon Tuitt back. He is the left wing, removing Xavier Grimble, who had to take over that role with Tuitt’s injury in the opener.

The Steelers played the return rather than the block on the second punt, which came at their own 39-yard line, but to little effect, as the Jaguars were able to down it at the four.

Jacksonville forced a return on their first kickoff of the day, sending it short, fielded by JuJu Smith-Schuster at the nine near the left sideline. With two Jaguars coming down the boundary, he turned upfield, hoping to find green in the opposite direction, but the blocking could only get him to the 18.

J.J. Wilcox was the starting gunner opposite Darrius Heyward-Bey as opposed to Mike Hilton. You’ll never guess who induced the fair catch off a 54-yard punt fielded at the eight-yard line (hint, it was Heyward-Bey).

The Steelers tried vice jammers on the left side on a punt late in the first half, but the Jaguars’ punter landed a nice coffin kick, out of bounds at the five. Brown never moved from center field. Roosevelt Nix almost got himself a block on that one, the fourth time he came close this season. You may or may not be seeing them tomorrow. Who knows. Well…I do.

Berry’s second punt of the day did not go well. From his own 19, he booted it, landing at about the Jaguars’ 46 before taking an unfortunate bounce backward, losing six yards for a 29-yard net. Even the full distance would have been poor, however.

With three seconds left in the half following a field goal, the Steelers ran a squib kick and executed it well, in part thanks to Terrell Watson absolutely blowing somebody up to free others to get down the field. Tyler Matakevich won the race, and the tackle. That was their only kickoff that was returned.

Both Sensabaugh and Nix were called for holding on the next punt return. Both were the right call.

Two Jaguars ran into each other on a later kickoff, one knocking the other down. Amusing. Too bad it was a touchback.

While Arthur Moats was credited for downing a 51-yard punt at the four-yard line, it was Heyward-Bey who ran off the returner at the 10-yard line.

Artie Burns is still getting pretty close on the field goal unit. I still think he’ll block one off the edge some day.

The only real notable thing about the Jaguars’ own late squib kick was that it gave L.T. Walton a chance to put somebody on his butt.