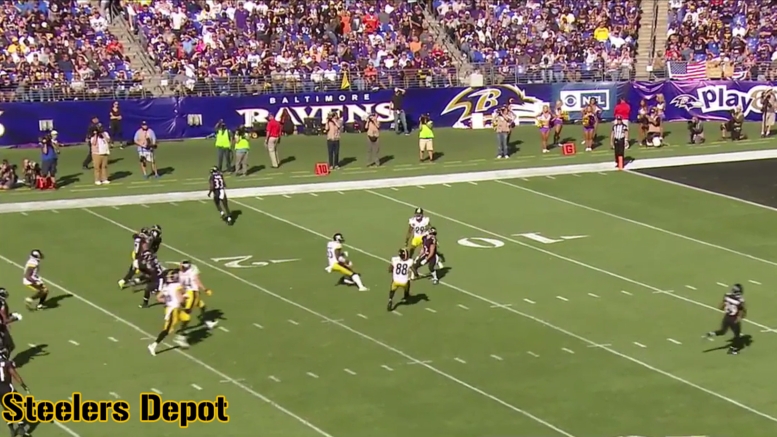 Another game has come and gone, and another week of special teams play is in the books. So it’s time for another installment of the special teams report.

You might not be shocked by this, but Darrius Heyward-Bey was the first guy down the field on the opening kickoff, which went for a touchback. He seemed annoyed that he didn’t get a chance to tackle anybody.

Despite the jammers doing a solid job, Sam Koch had too much hang time on his punt from the Steelers’ 39-yard line to allow a return. The Ravens downed it at the three.

Minor, yet significant note on the field goal unit: with Stephon Tuitt back, he is back in as the left wing there, replacing Xavier Grimble, who is the backup. He allowed a blocked field goal last week.

On the second kickoff, Heyward-Bey sped down the field and forced Alex Collins to his right, but that side of the Steelers’ coverage had been overrun. Robert Golden was knocked to the ground and Coty Sensabaugh was too far inside to the back, but he did run Collins out of bounds at the 24.

Koch’s second punt of the game was short for him, just 39 yards and fair caught at the 30-yard line. Were they really so worried about an Antonio Brown return?

Heyward-Bey drew a holding penalty by vice jammers on Koch’s third punt. J.J. Wilcox was the opposite gunner here and the first one down the field for a fair catch on a 45-yard punt to the 19.

Marlon Humphrey nearly got to a Chris Boswell field goal, but he was of course clearly offside, and was flagged. The kick was good from 49.

Collins forced a missed tackle from Vince Williams on another kick return, which he only brought to the 22 from five yards deep in the end zone. Sensabaugh recorded his second tackle on the play.

Boswell’s next kickoff was left deliberately short, fielded at the five. Tyler Matakevich was officially credited with the tackle, but, but Heyward-Bey and Williams were also there.

His next kickoff, shortly before halftime, was fielded at the 10, this time by Michael Campanaro, returning it to the 39. So what happened here? The Steelers’ criss-crossing lanes caught themselves, with Matakevich getting trapped in them middle of the field by two blockers, which created an inside crease for Camapanaro.

Justin Tucker’s 62-yard attempt just before halftime was short and wide right, fielded by Joe Haden. One can question the risk/reward analysis of his decision to lateral to Ryan Shazier as he was being tackled.

Terrell Watson got to just the 16-yard line on the second half kickoff. The Ravens put the ball on the one and did a good job of overloading the (coverage) left side of the field with more players than the Steelers could block. They did the same thing a few minutes later, this time reaching the 21. Clearly kicking to Watson.

What was wrong with Boswell’s miss from 44? Not the snap, nor the hold. He just hooked it left.

Just a 32-yard punt from Berry at the Steelers’ 45. It even took a Steelers bounce out of bounds at the 23. Not good enough.

Meanwhile, Koch sent a coffin kick 47 yards down the field, dead at the 14, where it was downed.

From the 20 this time, Berry did get off a 48-yard kick, but they were lucky that it was muffed at the 32. As a bonus, Brian Allen drew a holding call against vice jammers. That’s two holds drawn by the Steelers’ gunners against the Ravens.

Allen did have a bit of a mental blip on the next punt, a 27-yarder in close quarters. As the punt bounced at about the 15, his instincts kicked in and he touched the ball, instead of letting it bounce closer to the end zone.