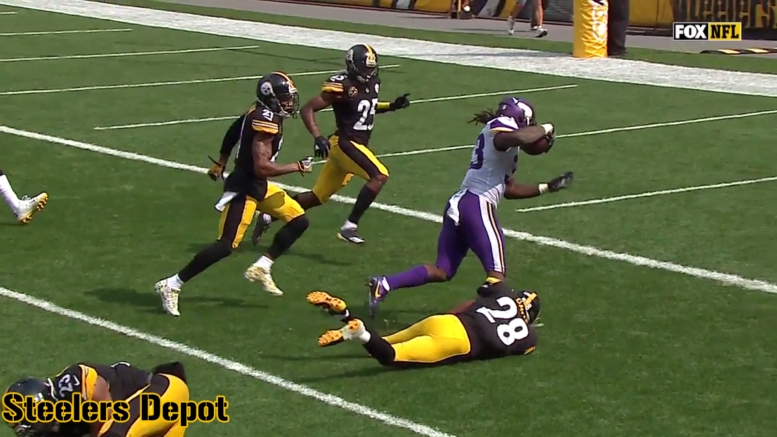 I’m not sure how well this opinion is going to go over, nor how ‘hot’ a take it might be deemed—though I’d like to think that I’m not one to be known for dishing them out—but I really wouldn’t be bothered if the Pittsburgh Steelers’ coaching staff gave some consideration this week toward the role of second-year safety Sean Davis.

A second-round pick in 2016, Davis actually opened the season as the starting slot cornerback, but lost that role in large part due to injury. He re-emerged midseason following the bye week and began rotating at strong safety until he ended up starting and playing all the snaps.

He gradually began the play better, and with more confidence, as time went on, and he deservedly won the team’s rookie of the year award, I thought. But I also think that he hasn’t picked up so far this year where he has left off, and that’s a problem.

In fact, Davis has had his hand in some of the Steelers’ biggest problems on defense so far this year, failing to provide contain, for example, on several of their biggest running plays allowed, including missing tackles. While he is credited with six run stops, there are other plays in which he was out of position so that he could not even miss a tackle if he tried.

Although he might have had a nice pass defensed, he also has not been much of a factor in coverage, either, or really in much of anything on the defensive side of the ball so far. In fact, he has been of pretty low impact through the first five games of the season.

I do not happen to be the biggest fan of J.J. Wilcox—frankly, he has taken bad angles and missed tackles as well—but I don’t think it would hurt to at least consider providing him with some opportunity to play in Davis’ spot, even if it is for a series here and there.

Considering that the second-year safety has also had injury issues to contend with at the same time, it might not be the worst thing in the world as a solution to reduce his workload a bit. They have already been rotating in Wilcox to take some snaps away from Mike Mitchell, so it is not something that they are opposed to doing fundamentally.

And Mike Tomlin is also not a coach who is opposed to sitting down a young player for the purposes of allowing him to compose himself. Eli Rogers is just the latest example of that.

All I really know is that Davis is among one of many players who need to play better this year. Taking some of his snaps is not going to magically solve every problem—or maybe even any problem. I’m not suggesting that it will, or even that Davis is necessarily a major problem. But given his development, it is something that I think might be worth considering, especially if issues continue.