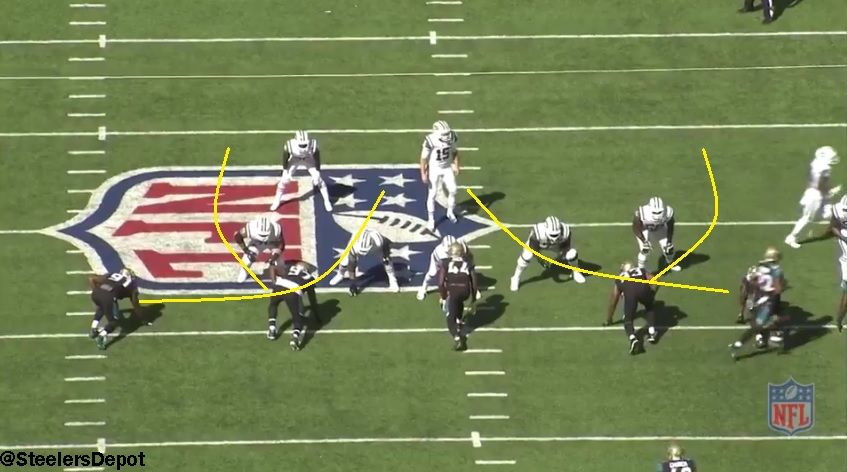 Looking at the Jacksonville Jaguars’ defense.

While the run defense looks awful, I don’t think it’s as bad as what the numbers say. Baltimore ran the ball a lot in garbage time and the Jags have faced a couple of athletic quarterbacks. Last week was their worst, giving up over 250 yards to the New York Jets, but 75 of those came on a fluky play where Bilal Powell tripped and fell through the hole but wasn’t called down. Jacksonville essentially let him score.

So I’m just saying, I don’t expect the Jags to be gashed the way they have been.

But let’s get to the numbers.

They’re allowing 5.7 yards per carry, more than a half-yard higher than anyone else. Their five rushing scores allowed is third worst in the league.

That defensive line is stout and well-paid. It’s led by Malik Jackson, who normally lines up as their three tech (between guard and tackle). Elsehwhere on the DL. Arby Jones as the 1T, Calaias Campbell as the strong side end (the Leo, as Mike Tomlin called it) and Yannick Ngakoue as the weakside edge rusher in their 4-3 front. Dante Fowler Jr comes off the bench as one of the best backups in the league. Three sacks despite not playing more than 48% of snaps in any one game.

As a pass rushing unit, it’s a much different than their run defense, better story. 18 sacks lead the league by a strong margin. Most of that comes from their defensive line, led by Campbell’s 5.5. A DB has just one sack on the season.

At linebacker, Paul Posluszny mans the middle but comes off the field in sub-package football. Myles Jack is the SAM linebacker and Telvin Smith the WILL, making them one of the league’s most athletic duos. For example, Jack had a pressure, a TFL, and a tackle on third down on the Jets’ opening series last week, forcing a three and out. And in nickel, they’re like a pair of cornerbacks out there.

Their sub-package is a 4-2-5 nickel. Haven’t seen any dime or amoeba defense. They do like to walk their safeties into the box and will do so with either Barry Church or Tashaun Gipson, though they’re more likely to do it with Church.

The group that looks good on tape and in the box score. In base, A.J. Bouye at LCB, Jalen Ramsey at RCB. Aaron Colvin is the third corner. I don’t call him a nickel guy because because Bouye has been moved around. He can play inside/out or shadow. And Colvin is inside/out capable, too. My guess is that Bouye stays on the outside this week to help deal with Martavis Bryant/AB, rather than putting him on JuJu Smith-Schuster.

At safety, as I mentioned above, it’s Church and Gipson. Church is probably a weak link of this otherwise strong group.

Cover 1 is definitely the dominate coverage they use. Not a ton of two high. They’ll man-up and force throws into tight windows. This is especially true on 3rd and long. 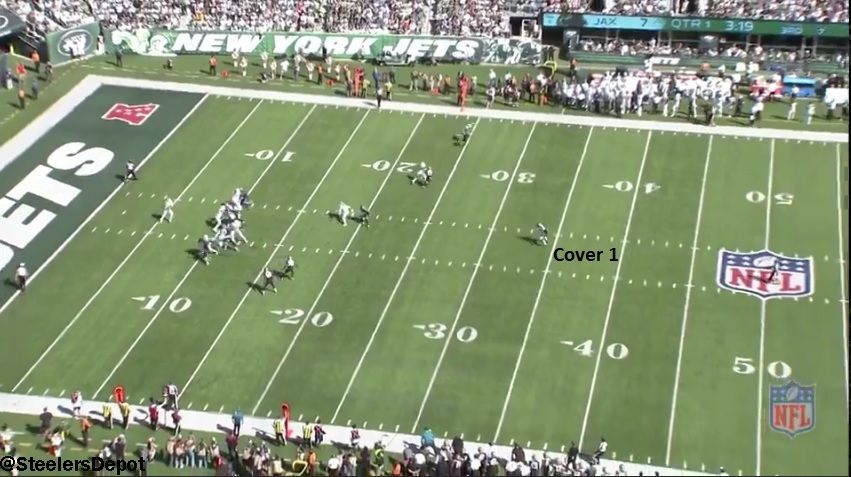 They’ll pair it with T/E stunts by their defensive line, which has done well to generate pressure. One example. 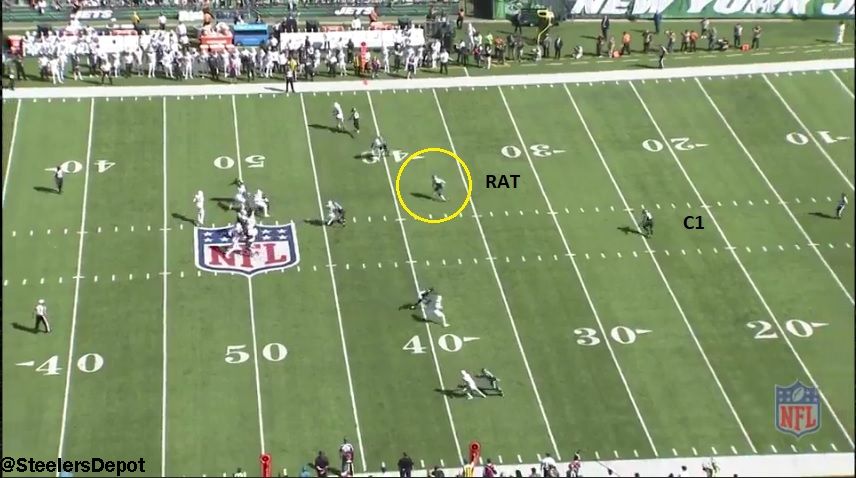 And as you usually get in C1, you get that Robber/Rat defender we’ve referenced. Reading the QBs eyes and looking to jump routes over the middle.

Not a pressure heavy team until it gets to “and long” situations. Will bring their FS and run a Fire X with those two athletic linebackers who can get up the A gap in a hurry, Jack and Smith. Steelers often use a four/five man pressure with the edges dropping but Jacksonville seems comfortable going with a six man pressure.

The Jaguars have 18 sacks as a team through four games, that’s good for 1st in the league ahead of Pittsburgh.  And 14.5 of those have come from the defensive line. It starts with recently acquired RDE Calais Campbell. He’s lighting it up this year with 5.5 sacks already. This is a big guy that can rush from anywhere along the LOS. He’s typically in a 2-tech, but will go 4-tech or a 5 occasionally. Defensive tackle Malik Jackson is another big-time player who will line up in a 2-tech, but goes 2i, 3 as well. These two, when lined up as the interior defensive lineman, can wreak havoc in a backfield.

Nothing crazy here, just a simple, old-fashioned beatdown by these linemen. Campbell and Jackson both explode through the line, and with pressure from the outside, Joe Flacco is forced to step up in the pocket, and that’s where Campbell and Jackson are waiting for the sack. Both of these guys have the strength of a true defensive tackle, with the hand movement of an edge rusher, making this a difficult task for guards and tackles alike.

LDE Yannick Ngakoue and Nose tackle Abry Jones round out the final starters for this line. Jones is there to plug up the holes, but he can get involved in a sack from time to time. Ngakoue is another great pass rusher. He’s a young guy in his second season, and is coming off of a two sack performance versus the Jets.

But wait, there’s more! They aren’t the only forces along this line. Dante Fowler Jr. may not start, but he’s just as disruptive, if not more of a nuisance for opposing offensive lines.

In this play, Fowler is lined up in a 9-technique, but even further off the tight end. This allows Fowler to gain full speed before contact with the right tackle. The RT has to side step and predict which angle Fowler is coming at, but that puts his on his heels and Fowler’s strength at the point of contact is too much to handle in this one. He easily disrupts the pocket and rips through for the strip sack. His great hands and awareness help him create the turnover and put the Jaguars in a great position to help put the game out of reach. His versatility as a pass rusher makes him an instant problem for offenses.

This line will get after you early and often, so great protection and quick ball release is going to be mandatory in this one.

This group has struggled in the run game this season, but overall it’s a solid group as well. Obviously Myles Jack (SLB) is the star of the unit. He’s an outstanding athlete in his second NFL season. The guy can rush the passer, make plays in space, and run sideline to sideline. He’s very solid in coverage as well. The will linebacker is Telvin Smith, another good coverage linebacker. He’s slightly undersized for his position, and can struggle when taking on linemen, but he’s solid in space. The most experienced veteran of the group, Paul Posluszny, is the mike. He’s the run-stuffer of the group and can be explosive in the gaps.

The Jaguars have been gouged to the tune of 662 yards on the ground this season. A run-heavy approach may be the best option, at least early on to help keep the defensive line honest.

Jacksonville also leads the league in another defensive category: Passing yard allowed. They’ve given up a total of 588 yards through the air this season, and a lot of people would immediately credit that to the secondary. While this group is talented and has playmaking ability, it’s their dynamic pass rush that has made it difficult for opposing quarterbacks.

That being said, this is still a very physical group that can create turnovers. Four of their five interceptions this season have come from the secondary. The unit includes Jalen Ramsey (LCB), A.J. Bouye (RCB), Barry Church (SS), and Tashaun Gipson (FS). Aaron Colvin sees work as the nickel.

This is another physical group of defensive backs that the Steelers will face. Church and Gipson can both be seen making plays in the second level and near the line of scrimmage, they’re not afraid to lower their shoulder. Take this next play for instance. Gipson is lined up about five yards off the LOS, he’s manned up on the tight end. The TE motions along the line, he’s the hot route and Gipson follows. His closing speed and pursuit angle is great, and he’s able to lower his shoulder, taking out the legs and forcing an incomplete pass. It would have been no gain regardless. 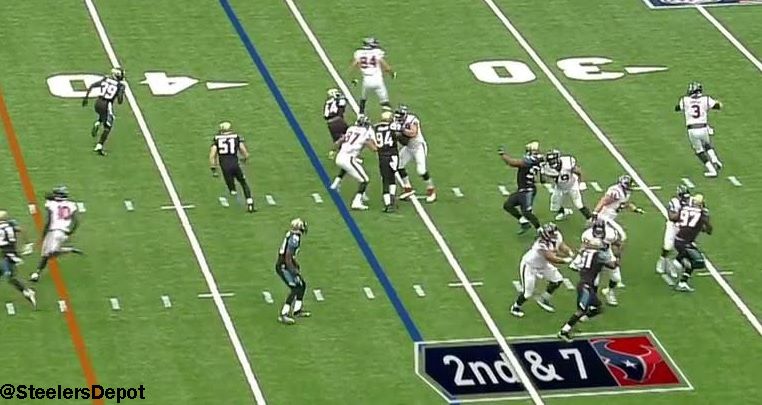 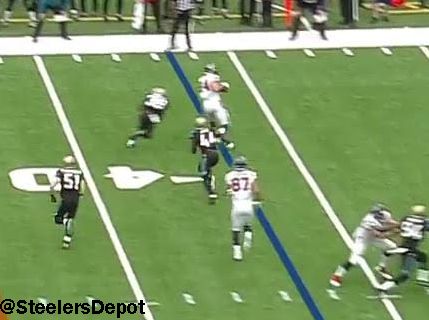 Bouye, Gipson, Church and Ramsey are four of the team’s top seven tacklers so far this year. Ramsey has the most upside of the group, being a top ten draft pick just one year ago. He plays with an edge, and gets after the football.

The Jaguars in total are the fourth most penalized defensive group in the league, and with the physicality of their defensive backs, they’re more susceptible to getting flagged. It’s hard to tell how many penalties this unit has drawn, but we do know they have been flagged for pass interference and holding at least 5 times so far this year, with 14 other penalties not attributed to any specific group. There’s some deep-shot opportunities here, provided the offensive line can protect Ben long enough to throw it downfield.