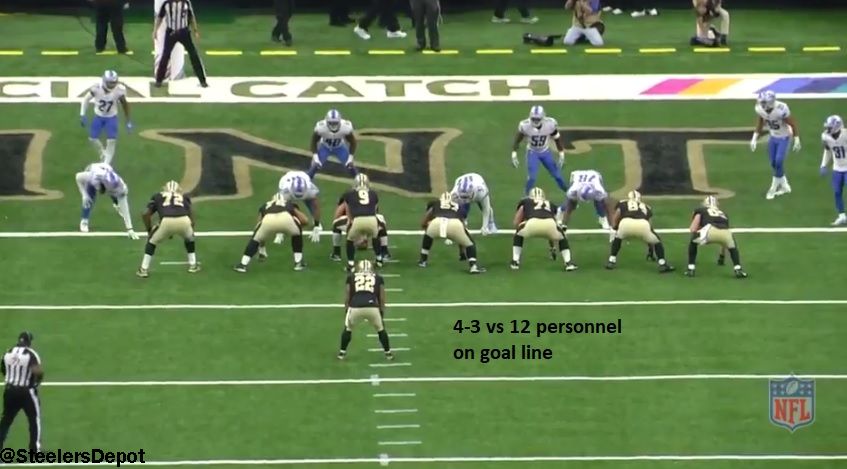 Breaking down the Detroit Lions’ defense.

The run defense has been strong. They’re allowing only 3.7 YPC, a top ten figure in the league. And they’re top ten in runs of 10+ yards (tied 9th) and their safeties are keeping a lid on things. Only a pair of runs that have gone for at least 20 yards, tied fourth in the league.

That was aided by burly nose tackle Haloti Ngata, who is done for the year with a biceps injury. But like any good four man front, the Lions employ a deep rotation. Penn State’s Anthony Zettel and Ziggy Ansah will be at LDE/RDE with A’Shawn Robinson and Akeem Spence on the interior.

But in Week 6 against the New Orleans Saints, Lions were on bye a week ago, another four defensive linemen played at least a quarter of the snaps. Jeremiah Valoaga is a rookie playing end.

They’ll move their guys around, including Ansah, which can be an alert to a stunt. Here, he lines up as the 3T before looping over left tackle. 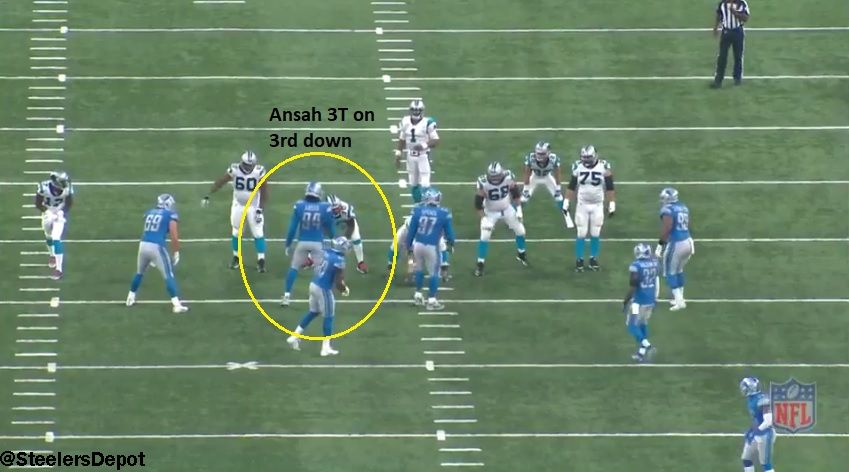 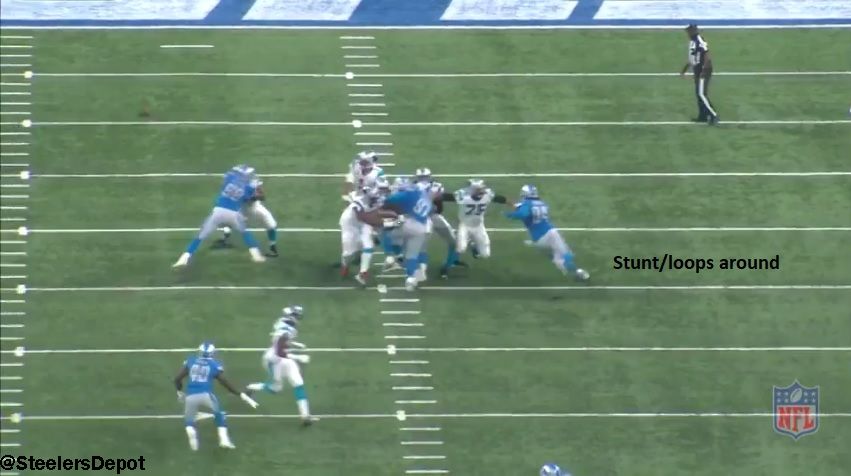 At linebacker, they’re going to play sub-package versus any three receiver grouping. The two who will stay on the field is Jarrad Davis, an impressive rookie I really liked coming out of Florida, and Tahir Whitehead, a plus athlete who leads the Lions in tackles. Nick Bellore will play WILL when they’re in their base 4-3.

Some other numbers. They have one of the league’s best third down defenses, 8th overall, but their red zone defense, like the Steelers, is poor. Opposing teams are finding the end zone 61.1% of the time, 24th in the league.

One other note. If the offense doesn’t go super heavy, the Lions don’t seem willing to go to goal line. As long as there’s two receivers out there, they will stay in base. If I’m the Steelers, go 21 or 12 personnel and run the ball.

It’s a secondary with plenty of pieces. Couple of underrated ones, too. CB Darrius Slay (#23) and safety Glover Quin (#27). Tavon Wilson should start at safety opposite and at corner, it should be Nevin Lawson. Miles Killebrew is a hybrid player who can play safety and in the box as a linebacker. They will run a 3-2-6 and sub in safety Charles Washington for a DL.

Statistically, they’re forcing a lot of INTs. Nine of them. Four by safeties, three by corners, two by the front seven. They’ve allowed just 20 passes of 20+ yards, 12th best, and three of 40+. QBs are efficient against them though, the Lions 24th in completion percentage and 25th in YPA. That may be due to a lack of overall pressure. The Lions have just 13 sacks on the year, tied for 22nd in the league. 12 of the 13 have come from the DL, led by Zettel and Ansah.

Coverage wise, like Ben Roethlisberger said, they mix up a lot of things. It’s hard to peg them into one scheme. Have seen Cover 1, Cover 2, Cover 3, quarters (Cover 4), and Cover 6. Here’s an example of Cover 6. 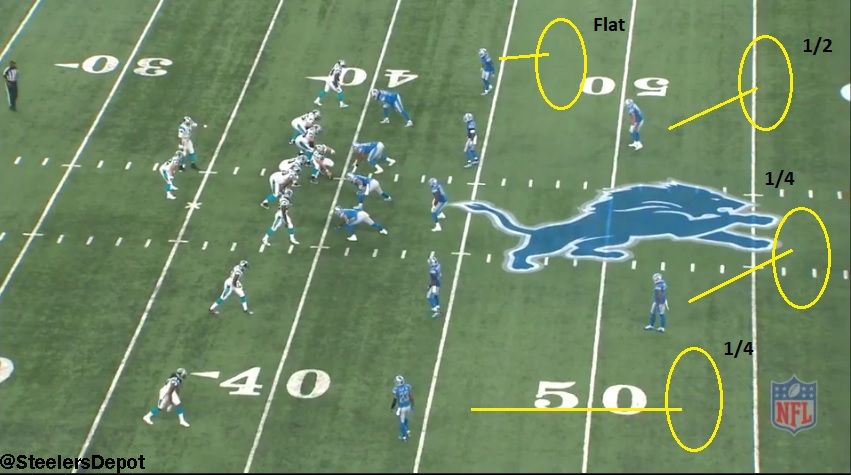 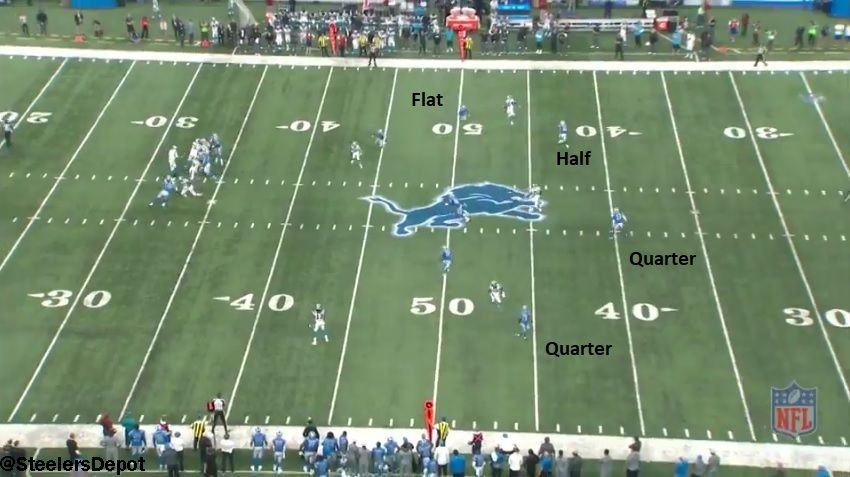 And here’s quarters down near the goal line. 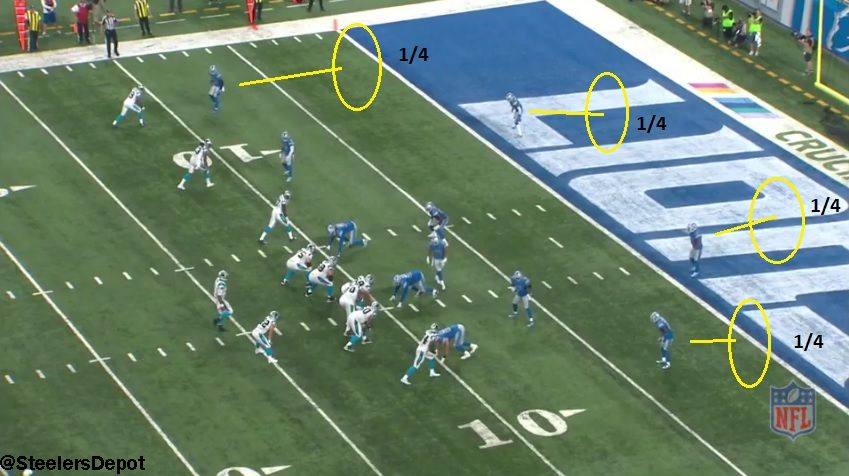 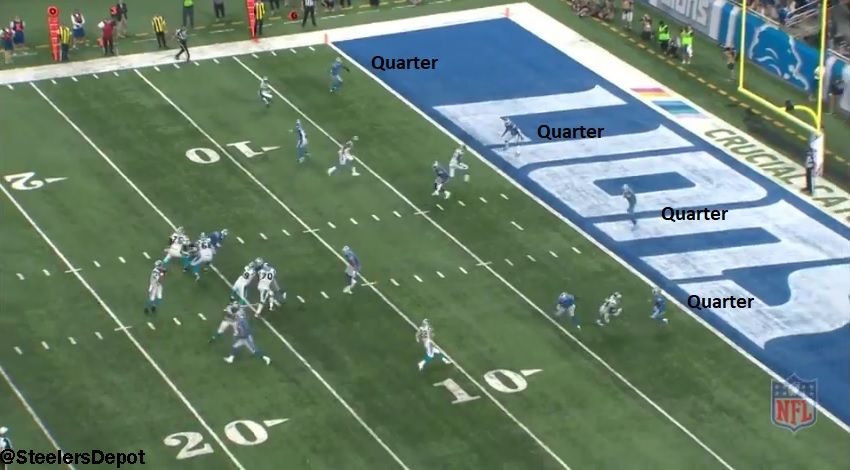 I don’t know if I’d go as far as to call them a blitz-heavy team but they’re a blitz-creative unit. Guys coming from everywhere. Here’s a six man pressure with the SS and SAM coming.

Despite losing defensive tackle Haloti Ngata for the season, this remains the strongest group on this team, especially when it comes to the pass rush. 12 of the team’s 13 sacks have come from this unit and of course it all starts with RDE Ezekiel “Ziggy” Ansah. It’s been a quiet season for Ziggy this year. Although he logged three sacks and forced a fumble versus the Giants, he’s only brought down the quarterback once since, and has only been in on a few tackles. He had a minor injury setback a few weeks ago, but don’t let a few down games cloud your view of this pro bowler, he’s still got plenty of dominance out there on the field.

Ansah is known for his finesse moves along the line perhaps just as much as his devastating bull rush. After a straight bull rush sack earlier in the game, Ansah has the left tackle on his toes in anticipation, but Ziggy gives a quick stutter step, uses his hands masterfully to gain outside leverage and there’s just no chance after that. It’s a wide open lane to the quarterback and Ziggy finishes with a strip sack. He has all the moves and weapons at his disposal.

The other defensive end is Anthony Zettel. He also has four sacks this season and can really be disruptive in the backfield. He’s got a high motor, and has the athleticism to make plays along the edge. On top of that he’s a former defensive tackle as well, displaying great strength and gap discipline to go along with his deceptive speed.

Rounding out the line: at defensive tackle they’ve got A’Shawn Robison and Akeem Spence. Both of these guys are playmakers, and display good play recognition at the line. You may remember Robinson’s pick six against the Saint last week. In addition to that both he and Spence have a forced fumble on the season. They use their hands well, something Ramon Foster, Maurkice Pouncey, and David DeCastro will have to control this week.

Take this play versus the Arizona Cardinals. Robinson is lined up in A 1-technique in between the guard and the center. He twists inside the opposite A gap and has a lane due to the pulling guard. The nickel corner does a good job of slowing the play down in the backfield, and that gives Robinson time in his pursuit. He takes a great angle and is able to put a good hit on David Johnson about 5 yards downfield forcing the fumble and giving the ball right back to Detroit.

When talking about the linebacking corps it’s hard not to start with rookie mike linebacker Jarrad Davis out of Florida. This guy has all the skills to be one of the better players at his position down the road. He’s great at blowing up gaps, and isn’t one to over-pursue very often. And to match that, he has the speed to run down backs near the sidelines. 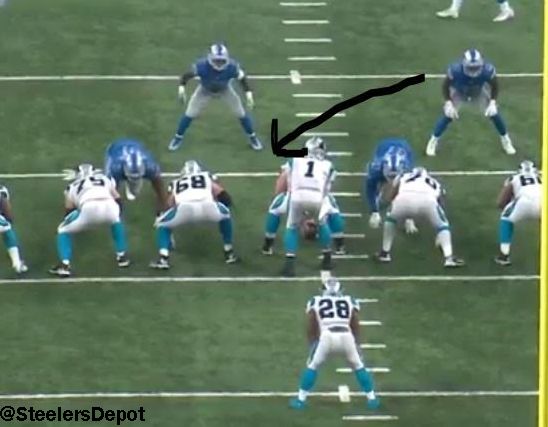 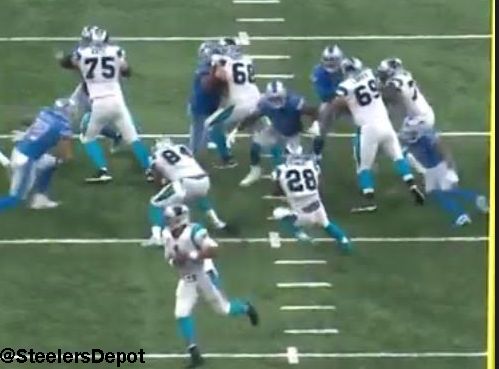 Here’s an example of his gap discipline and burst off the ball. The Lions are in their nickel package, with Davis lined up in the B gap. He’s going to blitz the opposite side A gap, and is able to squeeze his way in there to meet Jonathan Stewart behind the line for a loss of two yards. The blitz is also coming from the outside, so gap discipline is extremely important in this situation. If Davis doesn’t make it there in time, or he takes a less direct route to the gap, Stewart may get through for a 4 or 5 yard gain, but instead Davis blows it up.

Tahir Whitehead, the Lions starting middle linebacker a year ago, is now their will linebacker. And he’s making the most of his move to the outside. He’s pretty solid in coverage and in run-stopping, and always seems to be in on the tackle.

Finally we have Paul Worrilow in at the sam position.  He’s been dealing with a knee injury, and has been a limited participant throughout the week. It looks like he’ll be a go on Sunday. Worrilow has struggled this year in both coverage and against the run, albeit he has been dealing with injuries throughout. But don’t be surprised if the Steelers run it to his side early and often.

In the defensive backfield sits one of the best corners in the league, Darius Slay. Slay’s a good-sized corner who has great hip movement and is quick on the break, and can close and make plays. And most importantly he can turn a game around like he did against Atlanta, pulling in 2 interceptions. Now they ultimately lost this game, but Slay kept them within reach and gave them a chance to pull ahead. Slay is expected to be shadowing Antonio Brown for the majority of the game.

Nevin Lawson will line up on the opposite side, and Quandre Diggs will see work in the slot. Lawson has been fairly consistent this season, and tends to play tight on the line. He isn’t afraid to get his hands on a receiver that’s for sure. Diggs is a very good nickel corner, who excels in zone. All of these defensive backs tend to be good in run support and Diggs can be helpful in that arena as well. He is likely to see some work against Eli Rogers.

Glover Quin is the free safety and Tavon Wilson is the strong safety. Quin always seems to be involved in an interception one way or another. He is known for tipping balls in the air downfield creating an opportunity for a big play. He also is a solid tackler who doesn’t miss very often. Wilson is a bigger safety that can help in tight end coverage and run support. He, too, is mixed in on a lot of tackles.