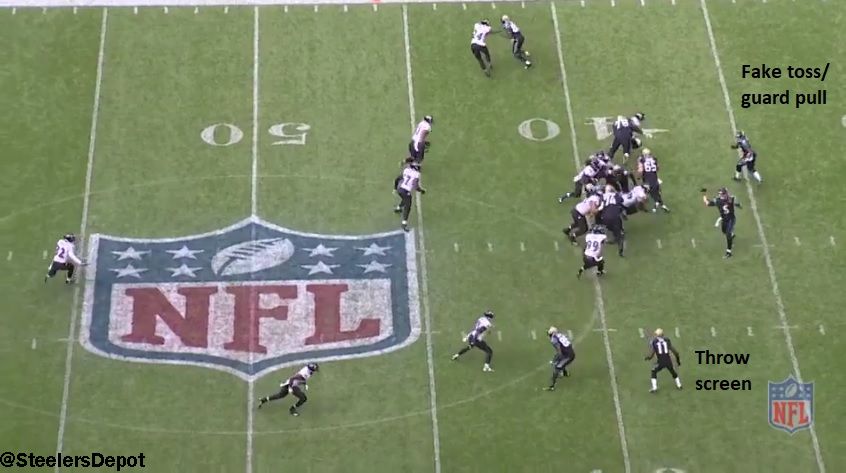 The Jaguars have an identity in their run game. It’s a tough, physical bunch whose aim is to get their big, first round back downfill. Leonard Fournette hasn’t exactly lit the NFL on fire the way some expected him to, averaging only 3.5 yards per carry.

Curiously, and this was touched on during Wednesday’s The Terrible Podcast, Fournette hasn’t gotten as much work as I thought. Just 30 more carries than backup Chris Ivory and his snap percentage, never that high to begin with, has decreased each week. 60% the first two has bumped to 50% the last pair.

Not a lot of household names but they remind me of Washington’s line. Little less talent and name value but a physical, nasty punch in the pass and run game. If you jump, you’re on the ground. If a guard is uncovered, he’s finding work. Their tackles are big and pack a powerful punch. Take you off your feet. Should be a great matchup.

The majority of their run game comes off power schemes. Pull the backside guard. You get some inside zone, though they don’t feel very effective at it, and very little of toss/perimeter games. One example of it of power. Left guard pulls.

They will set up their pass game by establishing that power run game and then false key the linebackers by pulling him on playaction. Just like the Steelers. Watch out for that.

Jacksonville uses a fullback, #40 Tommy Bohanon, mostly for Lead/Iso plays. But get some inside zone out of two-back, too.

Marcedes Lewis is a glorified linemen while Ben Koyack is the #2 TE. James O’Shaughnessy is the #3 in 13/23 personnel.

Clearly, with a Blake Bortles’ led attack, they’re not the most impressive group. And losing Allen Robinson was a monster blow. On the year, Bortles is completing just 54% of his passes and averaging barely more than six yards per attempt. But the TD/INT numbers have been good enough. Seven touchdowns to three picks.

The red zone is where most of those scores come from. His completion percentage inside the 20 is low, just 50%, but six of his 10 completions have found the end zone. He’s also been kept upright by his line, sacked only three times through the first month.

Allen Hurns and Marquise Lee lead the team. Hurns has 16 receptions while Lee is averaging 12.2 yards per catch and leads the team with 60 yards of YAC. Lewis, who I called a blocker earlier, has had a knack for finding the end zone. Three touchdowns on four grabs.

There is no go-to threat on third down. Lee leads the team with eight targets and Hurns has four receptions there. But no Jag has converted more than a pair of third downs.

Clearly, they aren’t an explosive offense, still without rookie DeDe Westbrook, ranking tied for 29th with six passes of 20+ yards.

Naturally, knowing those third down receptions stats shown above, they’re one of the worst offenders. Convering just 30.8% of their 3rd downs, 29th in the league. Their red zone offense is pretty efficient, with a big back and some of the good stuff schematically they do, tied for 9th with a 60% TD clip.

Jacksonville is a big screen team. Probably to get the ball in the hands of their playmakers and big backs in space, who can do some damage. That’s why Fournette already has 12 catches after never picking up more than 19 at LSU. Watch out for it on 2nd and medium (4-7). They’ve done it three times, all to the right (field side).

Lot of window dressing in this offense to compensate for a lack of talent. Some RPOs and fakes to get the defense moving the wrong way. Here’s a fake toss/smoke screen.

They also run the same banana/boot the Ravens often use, one that resulted in a Ryan Shazier INT.

Or a dual screen. Bubble to the bottom, RB to the top. 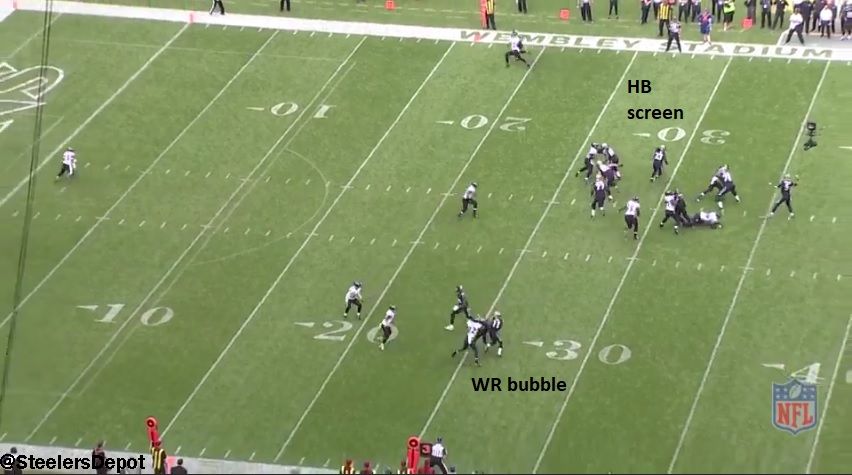 While they haven’t hit a lot of vertical shots, you get divide and scissor concepts downfield that will stress the Steelers’ safeties.

Another week, another below-average offense for the Pittsburgh Steelers to take on early in the season.

However, like a couple of other teams early in the season the Steelers have faced, the Jacksonville Jaguars come in with a great running game, which could give the Steelers fits on Sunday afternoon.

Through four weeks, the Jaguars (1-3) come into Sunday’s matchup with the 18th-ranked total offense, 30th-ranked passing attack and 2nd-ranked rushing attack (4.3 yards per carry, 34.5 attempts per game). In the four games, the Jags are scoring 27.2 points per game (5th overall).

Much like the Chicago Bears and the Baltimore Ravens, Jacksonville’s attack is run first, second and third, with the occasional pass mixed in.

Blake Bortles returns for a fourth season under center for the Jaguars, but he’s fallen way off since the start of his career, turning into a glorified game manager who’s asked to complete the 5- to 10-yard throws when the Jags look to break away from the run game for a play or two.

Two years ago, Bortles, Allen Robinson and Allen Hurns were a run-and-gun offense looking to light up scoreboards in a hurry. But that all went away last season as Bortles’ mechanics fell apart and his decision making turned disastrous. With Tom Coughlin coming in as vice president of football operations and Doug Marrone taking over as head coach, the Jags have looked to build a power-based offense behind the selection of LSU standout running back Leonard Fournette and Alabama offensive tackle Cam Robinson.

When not running the ball, the Jags are able to utilize play-action well, especially in the red zone.

Through four games of the 2017 season, I’ve seen the Jags run this type of play twice in similar areas of the field. In Week 1 at Houston, Bortles found fullback Tommy Bohanon on a similar play, but here it’s Fournette’s turn.

Although Bortles doesn’t really sell the play-action fake because Fournette is already flying out into the flat, the action works as the linebacker spying Fournette hesitates just a tick before running into his own teammate, leaving the rookie wide open in the flat for an easy score.

Since the Jags have utilized this type of play twice through four weeks, we might not see it on Sunday, but it’s one to certainly keep any eye out for.

Aside from Fournette in the running game, which has basically been 3 yards and a cloud of dust through four weeks, veteran power back Chris Ivory has spelled Fournette throughout the season, giving the Jags two big, physical backs to wear down defense throughout games.

Should the Jags defense keep this one close on Sunday, the Jacksonville offense could wear down the Steelers’ defense, forcing missed tackles on two big backs.

But a lot of credit for that has to go up front to a rebuilt offensive line that has just been mauling people early in the season.

All-Pro caliber center Brandon Linder just signed a massive extension this off-season and seems to have elevated his game even further, while Robinson has been exactly what the Jags’ front office hoped he be when they selected him in the first round.

Left to right, this is how the Jaguars will line up offensively along the line:  Robinson, Patrick Omameh, Linder, A.J. Cann and Jermey Parnell.

It might not look like a good line on paper, but in the smash mouth style the Jaguars are trying to play, this group works well together.

When thinking of smash mouth football, you don’t think of read-option plays, whether that’s running or throwing the ball. But that’s just what Marrone and offensive coordinator Nate Hackett have added this year, giving defenses another wrinkle to think about.

Taking a page from the Tennessee Titans’ playbook, Bortles executes a perfect read-option, rumbling for 27 yards over the right side of the line.

He’s not a homerun threat on plays like this, but with so much emphasis placed on Fournette and Ivory out of the backfield, a play like this can sneak up on you in a big spot.

As I mentioned earlier, Robinson and Hurns had huge years two seasons ago, but Robinson was lost for the year with a torn ACL on the third play of the season this year, while Hurns has struggled to take on the No. 1 role.

Marqise Lee basically cost the Jags a win single-handedly last week in the Meadowlands against the Jets as the USC product dropped a wide open third-down pass that would have put the Jets in field goal position late in the game.

Guys like Keelan Cole and Arrelious Benn have stepped in to take some of the lost targets from Robinson, but the Jags are still waiting for wavier pickup Jaelen Strong to get healthy.

Overall, without Robinson it’s not a good group.

The same goes for the tight end group, even though Marcedes Lewis has stepped up in the last two weeks to provide a big receiving option in the middle of the field.

Two weeks ago in London, Lewis had a career game, hauling in three touchdowns in a blowout win over the Ravens in London.

What the Jaguars like to do with Lewis as of late is push him up the seam trying to get him in one-on-one coverage with linebackers.

As you can see in the clip above, this is a straight go route from Lewis, getting him matched up with CJ Mosley down the seam where Bortles was able to place the ball up high for the big tight end to go up and get it.

Keep an eye on the Jags trying to do this when Vince Williams is on the field. I doubt they’d do this against Ryan Shazier, but you never know.

On special teams, the Jags have been mostly a mess in the return game as Lee has yet to get anything going on punt returns, while Corey Grant and Cole haven’t done much of note as kick returners.

However, kicker Jason Myers has been solid on the year, hitting 9-of-11 attempts, with one miss being from 52 yards last week in New York. Punter Brad Nortman sits eighth in the NFL in average yards per punt (47.2), downing seven of his 20 attempts inside the opponent’s 20-yard line while recording just one touchback.

Against the Ravens in London, Jacksonville did show the ability to execute a fake punt as Grant raced 58 yards down the field with the Jaguars holding a 37-0 lead.

Overall, this isn’t an explosive offensive or special teams whatsoever, but it’s important for the Steelers to come through with another great tackling performance, especially against two big backs.

Force Bortles to beat you. I’m willing to bet he can’t.