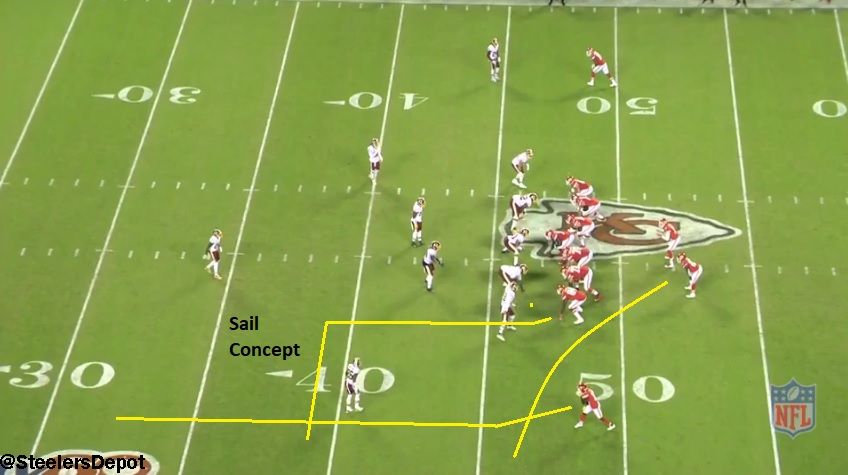 It’s obviously really strong, led by future rookie of the year Kareem Hunt. He’s averaging an absurd 6.3 YPC, second in the league. And his 603 rushing yards is easily the most in the league. He has seven runs of 20+ yards, which is more than any other team in the NFL. Just absurd.

Has only one fumble on the year, his first carry of the season. The Chiefs haven’t turned the ball over since.

Alex Smith is still mobile and run with the ball 23 times this season. Some scrambles, some read/option plays.

As a team, they’ve averaging 5.7 YPC. Tops in the league and no one else even is touching five. Six rushing touchdowns are third in the NFL.

Scheme wise, you’re going to get a mix of power and inside zone. Kansas City is one of the few teams who still employ a fullback on a regular basis, #42, Anthony Sherman, who is one of the best in the biz.

Similar to Chicago, lot of window dressing and pre-snap noise. Motions and fake jets/end arounds. And if you don’t respect it, then they’ll actually run them. Force the defense to think and play slow, allowing their top notch athletes into space. Steelers didn’t handle the ghost motion (fake end around) very well versus the Bears and I’m guessing KC will test them to see if they’ve correct the issue.

Right guard Cam Erving is definitely the guy to go after. Stephon Tuitt needs to have success against him.

Mix of RPOs. Inside zone + Y swing to Kelce a popular pairing. 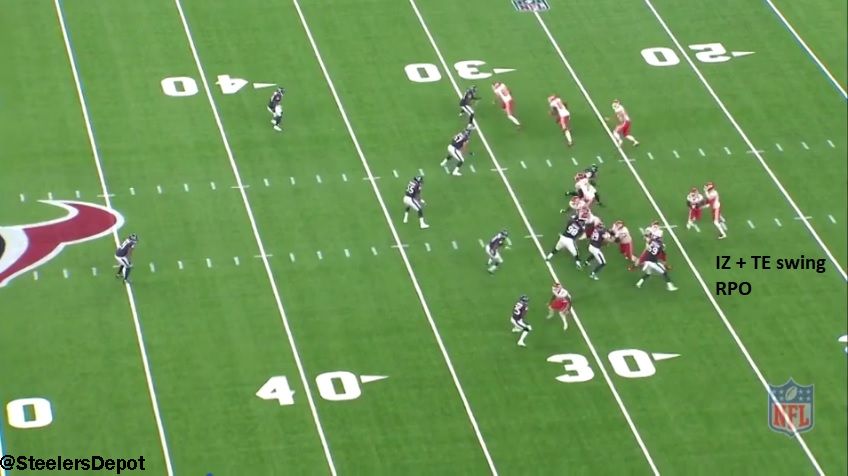 Chiefs will do a lot with Travis Kelce to help their run and pass game. In the run game, they can line up in 11 personnel (forcing the defense in nickel) and displace Kelce from the box, forcing a LB to walk out and lightening things even more.

Or they’ll go the other way. Get into 22 personnel and split Kelce out. Now you get a CB on a TE because the linebacker can’t walk out.

Tyreek Hill has caught 25 of 34 passes thrown his way and averaging a healthy 14.2 per catch. Travis Kelce is their leading receiver and ties Hill for most receptions on third down. Eight apiece. Hunt has 16 receptions out of the backfield.

They’re efficient in situational football, too, making them even tougher to beat. 46.9% on third down is fifth best and their 64% TD rate in the red zone ranks fourth. 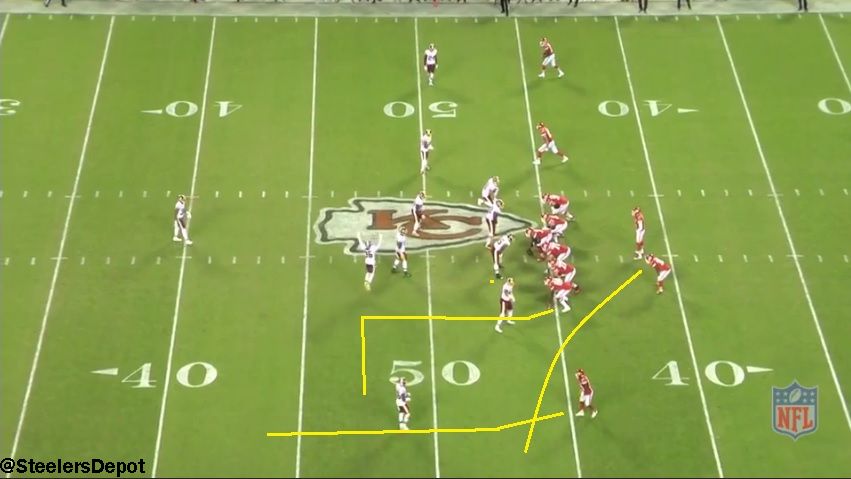 Or Tare to the field, slant/flat to the boundary on 1st/2nd and long.

When they attack vertically, they’ll look to get Kelce down the seam. Or when they want to be creative, mix in a post/wheel route, the #2 running to the flat and then taking off upfield.

One week after facing one of the league’s best rushing attacks in the Jacksonville Jaguars, the Pittsburgh Steelers now get to face one of the most balanced attacks in the league in the Kansas City Chiefs for a Week 6 showdown at 4:25 p.m. in Arrowhead.

That’s a tough draw for the Steelers coming off of an embarrassing loss to the Jaguars.

Talk about an explosive, balanced offense. That’s just what Andy Reid has set out to accomplish in Kansas City, and this year’s hot start has to be credited to veteran quarterback Alex Smith taking his game to the next level, along with the explosive start to his career by rookie running back Kareem Hunt, who currently leads the NFL in rushing yards (609, 121.8 ypg, 6.3 ypc).

With Smith, he’s a guy that many aren’t sure about when it comes to big games, but what we do know is that he’s a guy who won’t turn it over, taking what the defenses give him. But this year, he’s shown more of an ability to push the ball down the field, giving Kansas City playmakers like Tyreek Hill and Travis Kelce more chances to make splash plays down the field.

Those splash plays are set up off of the play-action fakes that Smith is elite at running. A lot of that credit has to go to Hunt and the offensive line for establishing an elite run game, but Smith is so good at selling the fake and making quick decisions pushing the ball down the field, taking advantage of defenders recovering from the fakes.

Prior to this touchdown pass to Hill in Week 3 on the road at the Los Angeles Chargers, the Chiefs ran the ball well on their opening drive, setting up this subtle play-action fake out of shotgun, allowing Hill to get into the second level against a secondary slow to recover from the brief fake.

Smith has become very good at touch and ball placement this year, and because of that the Chiefs’ offense has taken off in a big way this season.

That run game has mostly been all Hunt, who stepped in for an injured Spencer Ware in preseason and has played like an MVP-caliber back through six weeks.

Aside from his home run ability this year, he’s a tough runner who has some underrated elusiveness for a guy who tested less than ideally at the combine for a running back.

This is just a simple off-tackle run out of shotgun, but Hunt turns nothing into something thanks to his power and elusiveness, breaking multiple tackles along the sideline for a first-down run.

The Steelers have struggled at times this year with elusive backs, so Sunday’s matchup on the road will be a big test for a run defense looking to get back on track this season.

For the second straight week the Steelers will see a very good offensive line, as the Chiefs have one of the more underrated units in the league. From left to right, this is how the Chiefs should line up on Sunday:  Eric Fisher, Bryan Witzman, Mitch Morse, Laurent Duvernay-Tardif, Mitchell Schwartz.

Fisher was a questionable pick at No. 1 overall in 2013, but he’s emerged as a solid starting tackle in the NFL. Morse has quickly solidified himself as one of the best center’s in the entire league, while Duvernay-Tardif and Schwartz continue to get better and better each week, establishing themselves as maulers in the run game.

Out wide, the Chiefs won’t blow you away with talent at wide receiver, but in the West Coast system Reid runs, this group works well together.

Hill has become a guy that the Chiefs are confident in lining up out wide to win battles against No. 1 corners, but they won’t hesitate to move him around to take advantage of matchups all over the field.

Chris Conley came on strong this season for the Chiefs, but the receiver ruptured his Achilles last week at Houston, ending his season. In his place, look for Demarcus Robinson to emerge as the guy Smith looks to when scrambling. He was already working his way into the game plan a bit more each week, but Conley’s injury should accelerate that.

Albert Wilson and De’Anthony Thomas are two red zone guys that the Chiefs utilize well despite their diminutive size.

Just last week in Houston, the Chiefs pulled out a play buried deep in playbook for a touchdown, catching the Texans’ tough defense off guard, getting Thomas’ speed on the edge quickly.

The Chiefs deploy this jet motion quite a bit, which basically baits the Texans into not paying much attention to Thomas here. Once they realize he has the ball on the jet sweep, it’s too late as No. 3 tight end Ross Travis seals the edge, leading to the score.

Kansas City is one of the most enjoyable offenses in football, thanks to their quirky attack. They’ll bust out a number of odd formations, forcing defenses to spread out and confuse themselves.

And that doesn’t even begin to hit on Kelce, who is the league’s best tight end. He can line up anywhere — including in the Wildcat as the quarterback — allowing the Chiefs to get him a number of touches each week.

On special teams, Kansas City might be even better in that department than on offense, thanks to the spectacular coaching of Dave Toub, who has helped the Chiefs’ special teams score 11 touchdowns.

That is by far the most in the NFL. Incredible.

Hill is a game-changer on special teams, having busted off an 82-yarder one week ago. Jordan Berry and the Steelers would be wise to not even kick him the ball on Sunday.

In the kicking game, kicker Harrison Butker, signed off the Carolina Panthers’ squad following an injury to Cairo Santos, has been perfect for the Chiefs, including nailing a game-winning kick over the Washington Redskins in Week 5 with just five seconds on the clock. Just about everything has gone right for the Chiefs this season.

Punter Dustin Colquitt averages 44.2 yards per punt, having punted the ball just 21 times on the year. Of those 21 attempts, nine of been downed inside the 20. He’s still a weapon for Kansas City.

This is a tough Chiefs team any way you try and slice it. For the Steelers to pull off the upset, knocking off the lone undefeated team in football, they’ll need everyone’s A+ games, and have a few bounces go their way as well.