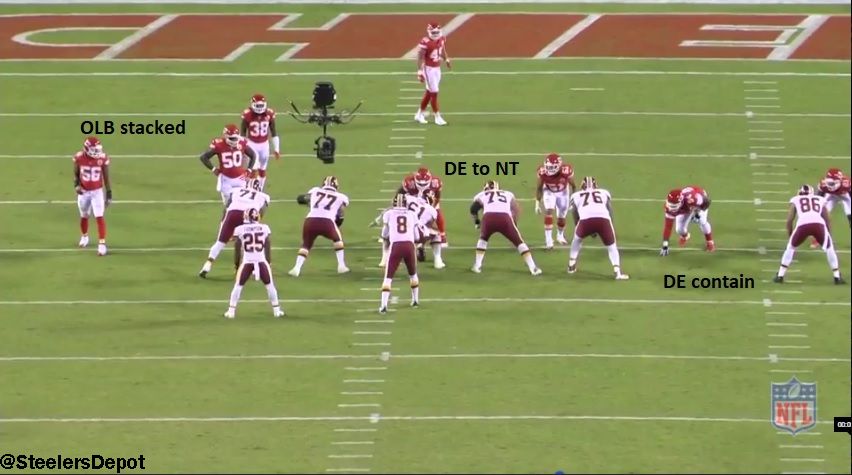 The run game has been sub-par. They’re allowing 4.6 YPC, tied for 25th in the NFL. The 22 runs of 10+ yards is second most and while their safeties have done a good job of keeping a lid on things (just two runs of 20+), it’s not like the Steelers bankroll that gut-busting run every week.

It’s a talented front seven. At nose tackle is Bennie Logan, signed away from the Philadelphia Eagles after letting Dontari Poe go. Been awhile since the Steelers have faced a Poe-less team but Logan is a force of his own, as Dan will talk about below. At LDE is the always underrated Allen Bailey and Chris Jones at RDE. Bailey plays at a high snap count, over 75% of the time.

Backups include Rakeem Nunez-Roches at RDE and Jarvis Jenkins at LDE.

At linebacker, you have Justin Houston at LOLB, Dee Ford at ROLB. Ford has missed the past few weeks but is expected to play this weekend, pushing Frank Zombo into a reserve role. Terrance Smith will pick up a couple of snaps at LOLB, too, but Houston is playing well over 90% of the snaps.

Inside linebacker has the always-steady Derrick Johnson, still kicking and playing well at nearly 35 years old. The other true ILB is probably Reggie Ragland, who logged his first action last week but the Chiefs use hybrid linebacker/safety Daniel Sorensen on most downs. Most often see Ragland on 1st down, Sorensen for the rest. More on that later. 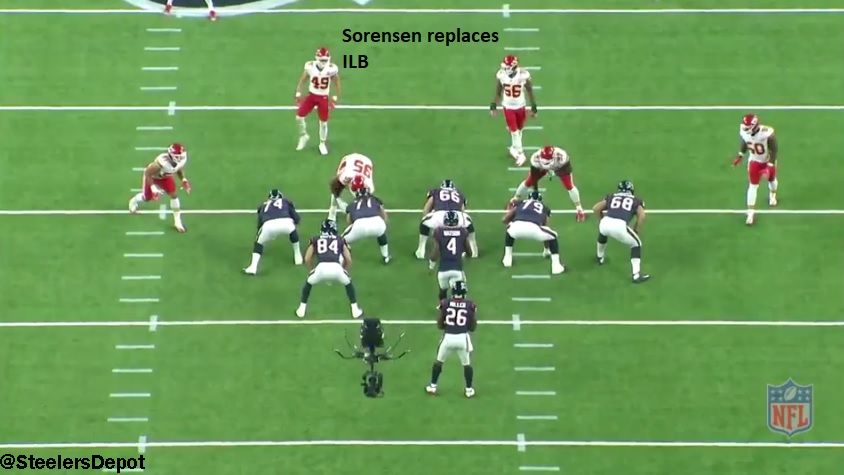 The Chiefs have 14 sacks as a team, fifth most in the NFL. Houston leads the group with 5.5. Chris Jones has 3.5, though most of that came in one game, and the DL and LBs are tied with 6.5 sacks for each group. They get pressure from a lot of different places but I’d consider Jones and Houston to be their biggest threats.

One last thing. Looks like they do some run stunts when the guard pulls. OLB/ILB crash/scrape and they’ll even do the same with the OLB and DE. Try to screw up the opposing blocking scheme and use leverage to their advantage instead of just crashing into guys and winning straight up.

Statistically, there’s some good, some bad. The talent and coverage squeeze throws. Quarterbacks have the lowest completion in the league versus the Chiefs, completing only 51.4% of their passes. But their nine touchdown passes rank highly in the league and they’ve allowed 19 passes of 20+ yards. That’s fourth most in the league. Seven of those have been 40+ yards, by far the most in the NFL. So if there’s a game for the Steelers to work the long ball, even against Marcus Peters (Terrelle Pryor caught a 44 yard TD vs him Week Four), it’s this week.

It’s a talented bunch. Physical, aggressive group. Probably not quite as good as the Jaguars, mainly because they are missing Eric Berry, but it’s close. At cornerback, Marcus Peters will play on the left side (usually doesn’t shadow) with Terrance Mitchell on the right. Phillip Gaines is in the nickel. At safety has Sorensen on early downs opposite the underrated Ron Parker, one of my favorite safeties in the game.

When Sorensen kicks down to his linebacker spot, in their 2-3-6 dime, #21 Eric Murray will replace at safety. 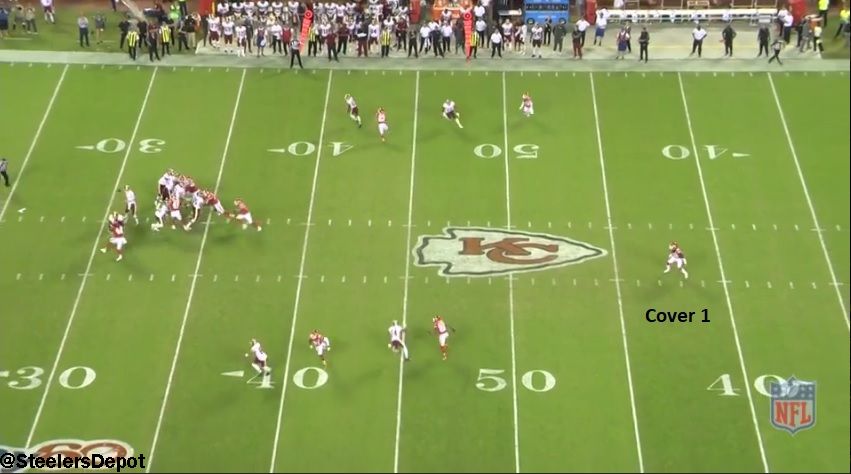 Not a super creative blitz team. Not going to get a lot from the DBs. They do things similar to Pittsburgh in their window dressing. One concept the two teams share. Shift both OLBs to the same side with the away side end containing on the backside.

If your backs stay in, the Chiefs will blitz. And their man coverage will create some five and six man pressure. 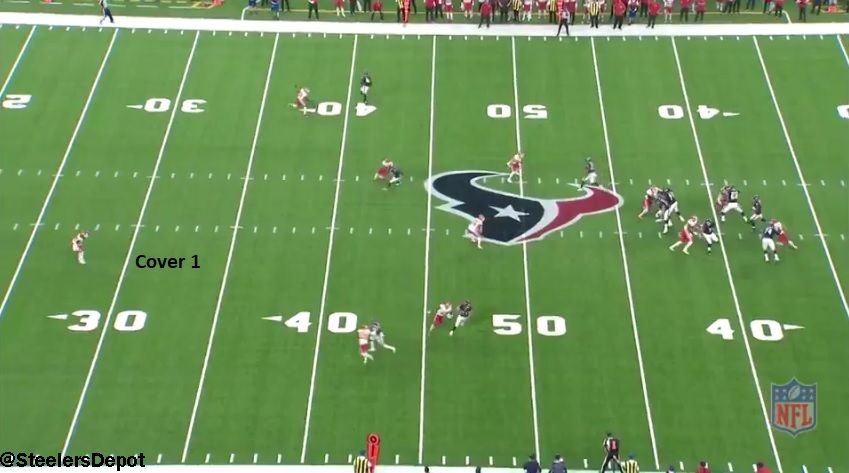 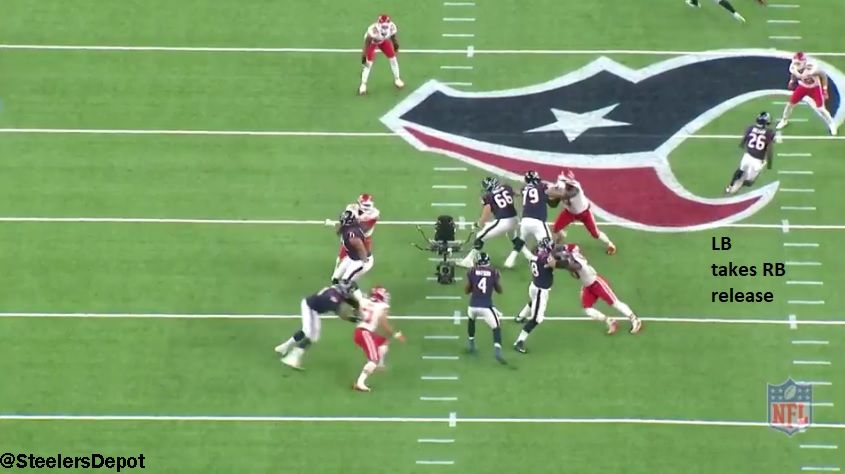 One of these weeks the Steelers will face an average to below average defense, but week 6 is not one of those weeks. They once again continue their streak of playing great defensive units, and this time they get an undefeated group. Yay!

This line is full on run stoppers. Starting with 2nd year player LDE Chris Jones. Jones saw some time last season, but came in relief of Donatari Poe. Now Jones is the clear-cut starter, and he’s huge for an end at 6’6” 310 lbs. This guy may not have top notch speed, but good luck running against him. His power moves on his pass rush are pretty nasty; he’s racked up 3.5 sacks this season, 3 coming against the Eagles in week 2.

Next is NT Bennie Logan who was acquired from Philly during the offseason. He has been dealing with a knee injury the past couple of weeks, but has been a limited participant in practice and it appears he will be a go on Sunday. Logan is most proficient in run defense. He has 16 tackles on the season, which may not seem like a lot, but that’s pretty good for a defensive lineman in a 3-4 system. 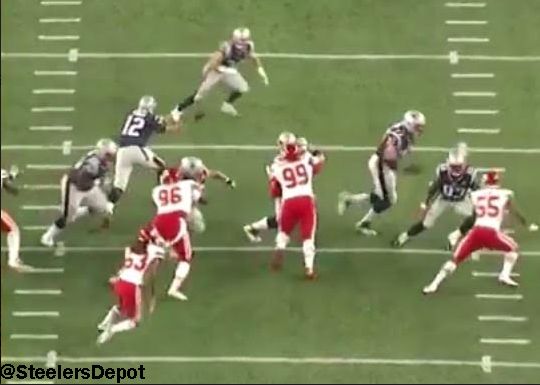 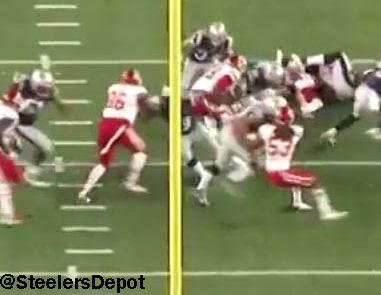 Take this play, for instance. Logan is lined up directly on the center. It’s a toss left, and the center is looking to chip Logan and move to the second level. The right guard is supposed to pick up Logan, but instead of continuing to run with the ball carrier, he moves inside and is right there for the tackle when Rex Burkhead tries to cut inside. Heads up play by Logan.

Finally, we round out the run stuffers with RDE Allen Bailey. Bailey is another large force at 6’3” 288 lbs. He’s in his 7th season and has 2 sacks this year, on pace for a career high. Rakeem Nunez-Roches, Roy Miller, and Jarvis Jenkins will see time for breaks or situational play.

This may be the best group of linebackers in the NFL, a good mix of veteran experience with young, up and coming talent. We all know about LOLB Justin Houston. The guy has been electric over the past several seasons, and he’s showing no signs of slowing down. He’s had a sack in all but one game this season, good for 5.5 so far, and he’s knocking balls down at the line of scrimmage as well. This will be a good time for the Steelers to get Marcus Gilbert back, as Houston has wreaked havoc on right tackles.

At LILB is the 13-year man Derrick Johnson. Johnson has produced at a pro bowl level for a long time. He’s joined by RILB Ramik Wilson, a younger linebacker in his 3rd season. Wilson has a great motor, and will run down plays. He’s also very light on his feet, allowing him to adjust easily.

And at ROLB is the 4th year linebacker Dee Ford. Ford will test Alejandro Villanueva early and often. He’s another great rushing linebacker who converted from defensive end. Ford has solid explosiveness and uses his athleticism to maneuver around offensive tackles in a variety of ways. But it’s not just tackles he’ll be working against. Sometime he takes on the guard, and that can be a difficult matchup for the offense.

In this play, Ford is lined up along the LOS right on the guard, he’s showing blitz, but that won’t be enough to stop him from getting through. A quick stutter step and Ford’s athleticism is shown to be too much for a guard to handle. He gets inside leverage on the guard almost immediately and is able to get a hand on Carson Wentz leading to a third down sack.

Lastly, we have the secondary, a unit that would be even more dynamic had they not lost Eric Berry for the season in week one. LCB Marcus Peters is a 3rd year corner with great potential. He’s already proving himself to be a big-time playmaker, and he’s also not afraid to get in there and make some tough tackles. He can run with the best of them. His intellect on the field was showcased against San Diego in the play below.

Peters is lined up way off of the receiver and runs with him even up to the point that Phillip Rivers begins his throwing motion. But he never takes his eyes off of Rivers and closes to make a big interception in the first quarter.

On the other side is Terrance Mitchell, and he’s primed to see a lot of work this season as teams are staying away from Peters as much as possible. Mitchell plays with a ton of physicality, oftentimes lining up directly on the receiver and always using his hands. That can get him into trouble, however, as he’s been penalized quite a bit, including drawing four flags against New England. And while he may be able to get burned from time to time, he has deceptive closing speed. Eric Murray looks to get the most work as the nickel.

And for the safeties we have Daniel Sorensen and Ron Parker. Sorenson is very good in the run game, but can struggle in deep coverage from time to time. He has 24 tackles this year, so you can expect to see him in piles. Parker fills in for Berry. He’s not a flashy playmaker, but he also is involved in the run game quite a bit.

The Steelers are going to need a big game out of Ben Roethlisberger in this one. It’s a tough task in Arrowhead, but coming off of a ghastly performance, Big Ben is primed for a comeback performance against a secondary that can be beat deep.