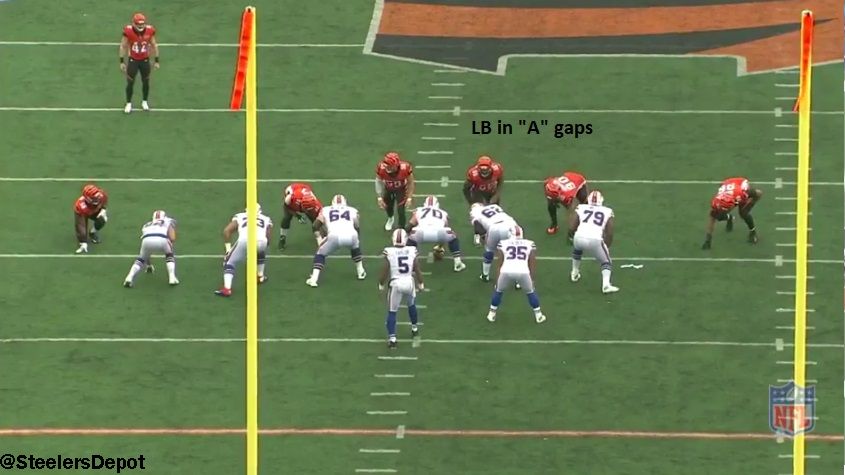 Looking at the Cincinnati Bengals’ defense.

The Bengals’ run defense has been solid. Allowing just 3.8 YPC, tied for the 10th lowest in the league. Only given up ten runs of 10+ yards, tied for the third best mark and just a lone run of 20+, tied for the best mark. Still have Carlos Dunlap on the left side and Geno Atkins as the 3T. Michael Johnson has seemed to kick inside more often to allow the young bucks play RDE; Carl Lawson and Jordan Willis.

As is their hallmark, they have a deep front four. Fat man Pat Sims is still a reserve 1T/nose tackle while Ryan Glasgow gets work as the three tech.

Vontaze Burfict works as the strong side linebacker with leading-tackler Nick Vigil as the WILL. Kevin Minter, #51, is the MIKE. Definitely some turnover here with no Rey Maualuga and Vincent Rey. In nickel/sub-package, Burfict and Vigil stay on the field.

Cincinnati has 18 sacks on the season, tied for 5th best in the NFL and only two behind the Steelers. 14 of those come from the defensive line, as long as you include Carl Lawson as a DL.

They’re good situationally, too. Ninth best third down rate, 35.9%, and tied for the 6th best red zone D, allowing offenses to score just 43% of their opportunities.

This is a defense that responds in kind to TE trades and motions that change the strength of the formation. They don’t like to align in an under front.

Even losing pieces over the years, it’s still an impressive group. Dre Kirkpatrick at LCB, William Jackson III (#22) on the right and Darqueze Dennard in the slot (they’ll blitz him, two sacks on the season). George Iloka and Shawn Williams at the back end.

Not a lot of interceptions. Just four on the year, only three by the secondary. Have some more impressive numbers elsewhere. 4th lowest completion % by opposing QBs and best YPA (5.6).

More stats. They aren’t giving up a lot of deep passes, only nine of 20+, tied for the best in the NFL. But when they do give up the deep ball, it’s a chunk play. Four of the nine of 20+ yards actually went for 40+. Product of man coverage and when guys get beat.

Man-coverage team though less 2 Man than I’ve seen the Bengals run in the past. What I think they do really well is hold and disguise their coverages. Quarterbacks first read is always the safeties to know what the defense is running and the Bengals will give Ben Roethlisberger fits, we’ve seen him have trouble deciphering.

On third down, like a lot of teams, they go man-heavy. Cover 1, just as the teams the Steelers have faced in recent weeks. There’s some Cover 2, too. They do a nice job of matching vertical concepts down the seam, something I wish the Steelers would do more of.

As is usual for this defense, they like to “sugar” the A gaps and give the illusion of a heavy blitz, even though they often drop out.

Well here we go, another visit with Vontaze Burfict, Adam Jones, and the like. Should be fun.

This defensive line is really producing in 2017. Despite being 14th in the league for rushing defense, this unit has helped keep opponents to under 4 yards per carry, and most teams are running it nearly thirty times against the Bengals. Not to mention the sack numbers: already 18 sacks on the season, good for 5th in the league and 2 behind Pittsburgh. A lot of this success is thanks to these guys:  LDE Carlos Dunlap, NT Pat Sims, DT Geno Atkins, and RDE Michael Johnson. A lot of veterans in this group, but don’t mistake that for meaning they’re players past their prime. In fact, some of these pass rushers have been at their best. Atkins is on pace to match a career high in sacks (12.5 in 2012) as he’s racked up 4 of them through 5 games. Johnson is on pace to set his highest sack total since 2012 as well (11.5); he’s got 3 sacks so far.

Here’s an example of Atkins’ athleticism as a defensive tackle. Here he’s lined up in a 3-terchnique between the guard and the tackle. He’s one on one with the guard, but is chipped by the running back. As Deshaun Watson steps up to the right, Atkins releases and attacks the gap, forcing Watson to escape left. The coverage is good, but Atkins being able to track down perhaps the fastest quarterback in the league is no easy feat. He’s still got it.

This here is a group that won’t miss many tackles. Nick Vigil is the sam. Kevin Minter, the mike. And Vontaze Burfict is the will. Burfict just recently returned to action in week four, but it doesn’t appear he missed a beat. He’s averaging ten tackles per game, and we know he’s capable of making impact plays, legal or not legal, at any point in the game. Minter is in his first year with the Bengals after four years with the Cardinals. He has been hampered by injury, so his stat sheet has taken a hit, but he’s a quality run-stopper who is capable in coverage as well.

Second year backer Nick Vigil has made significant strides in 2017. He’s exceptional in coverage, and has the athleticism to chase down runners in the backfield and near the sidelines. He’ll break up some passes across the middle as well. But it’s for this group, it’s largely about the run defense.

Blocking in the second level is going to be a challenge, but if the Steelers can run it like they did versus Kansas City, they’ll be okay.

LCB Dre Kirkpatrick was recently a full participant, so it looks like he should be able to play this week, which would be a big benefit for Cincinnati. Adam Jones is your LCB who has been a limited participant in practice. If he can’t go, expect to see a mix of corners including Josh Shaw to see time in his place. Strong safety is Shawn Williams and free safety is George Iloka. Darqueze Dennard, William Jackson III, and even safety Clayton Fejedelem (limited participant) will see plenty of time in rotation.

They like to use their defensive backs in a variety of ways, and they aren’t afraid to send a blitz from the outside. Dennard already has a couple sacks on the year. This team is 2nd in the league in pass defense, and surprisingly most of the splash plays have come outside of the top four starters. Iloka has a pick, but the team’s other three interceptions are coming from the linebackers or situational defensive backs. There’s literally always a possibility for a big play as they rotate like crazy.

Jackson is a promising young cornerback, you may remember the Bengals took him in the first round a year ago. He’s already making his mark on this squad. Take this play below versus Aaron Rodgers and the Packers. He’s lined up about five yards off the line, and uses his in feet well, chopping in place and letting Jordy Nelson get out of his break before closing in at the last second. Jackson picks it off clean and has nothing but green in front of him on his way to a 75-yard touchdown return. Big plays from everywhere in this secondary.

Jones, believe it or not, is still a solid corner now in his eleventh season. The guy still makes plays all over the place, and is only 2 years removed from his first pro bowl. The safeties are vital parts of the run game as well. Williams led the team in interceptions last season, and was second in tackles with 81, he gets after it. Iloka tied Williams with interceptions, and was fifth on the team in tackles with 73.

They play great defense as the Steelers are more than familiar with, and it looks, at least for now, that they will have their full group of starters in line come Sunday.