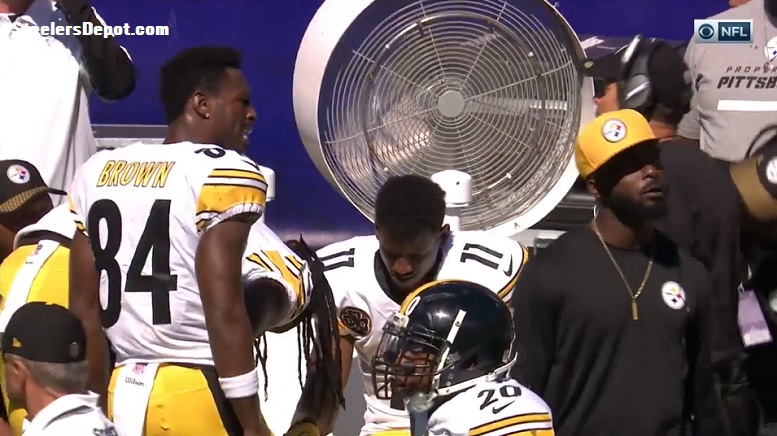 As you can probably imagine, the sideline tantrum that Pittsburgh Steelers wide receiver Antonio Brown threw Sunday in Baltimore is now being devoured by the major media sports networks and that includes the ESPN radio shows. On Tuesday, former Steelers safety Ryan Clark was a guest on The Ryen Russillo Show on ESPN Radio and as expected, he was asked to give his thoughts on Brown’s Sunday actions.

First, Clark, who was a teammate of Brown’s in Pittsburgh for four seasons, was read some of the comments made Tuesday morning by quarterback Ben Roethlisberger concerning the actions of his receiver during Sunday’s game. Here’s most of what was recited to Clark from that interview and it didn’t take long for the former Steelers safety to respond to Roethlisberger’s read quotes.

“I 100-percent agree with him,” Clark said. “Antonio has done an extremely good job of tricking people, right? He has that smile and when he talks he seems extremely team and oh, this is a great team guy and he always shows up to play. He didn’t holdout last year to get his money. So he’s done a very good spin-job of having us think, or making people think who dont know him, that it’s like all about the Pittsburgh Steelers. I’m just a hard worker who’s here to win football games.”

Clark didn’t stop there, however, when it came to him blasting Brown.

“Nah, Antonio Brown loves Antonio Brown,” Clark said. “And Antonio Brown was upset, God forbid, that a guy that has over 10 targets in the first three games of the season is missed one time. Just know that he behaved in a way… if Odell Beckham Jr. does this, it’s on every station, right? It’s on every single show. And for me, I think it’s actually different than any of Odell’s outbursts. Everything Odell did, to me, was an implosion. He was just going nuts because he couldn’t figure out any other way to better express himself. He wasn’t going at coaches, he wasn’t arguing about not getting the ball, he wanted to win games and he wanted to be a part of winning games.

“This [Antonio’s situation] is, you miss me one time on a play I could of scored a touchdown that would have helped me. Not would have helped the team, it would have helped me. God forbid you check the ball down to Le’Veon Bell, Oh my goodness, that’s the worst thing in the world. Lev might get the ball, I can’t take it, I’m going to pass out. So you can’t behave that way because the quarterback came off his read a little early and you were wide-open. This is who he is. I said that is who he was last year when it came to the phone thing. I don’t dislike him, I have no issue with him.”

“If you listen to people talk about him, if you listen to the media, a lot of time the fans, they have an adoration for him that is not necessarily a depiction of who he is,” Clark said. “He’s like most receivers, he’s selfish. And you can see from last year in the locker room he’s also self-centered. And I can actually say I don’t think it’s malicious and mean-spirited though. I think that’s just who he is. If you listen to his story, this is a kid that would pay 20 dollars to sleep in a hotel because he had nowhere to live. And so, I think all he’s ever known is Tone has to get it, Tone has to get it and when something like this happens that affects him, he didn’t care that he didn’t score a touchdown for the team, it affected him, he had an issue with.

Clark was then asked how he thinks Brown’s recent antics are going over in the Steelers locker room right now.

“Just used it and the difference between the feeling for Antonio outside the locker room and inside is they actually know who he is,” Clark replied. “So for other people, because he’s never had this happen on the sideline before, this is like oh my goodness, like I cant believe it: Antonio Brown behaved this way?”

Well, there you go. I can’t wait for these quotes from Clark about Brown circulate around the Steelers locker room.