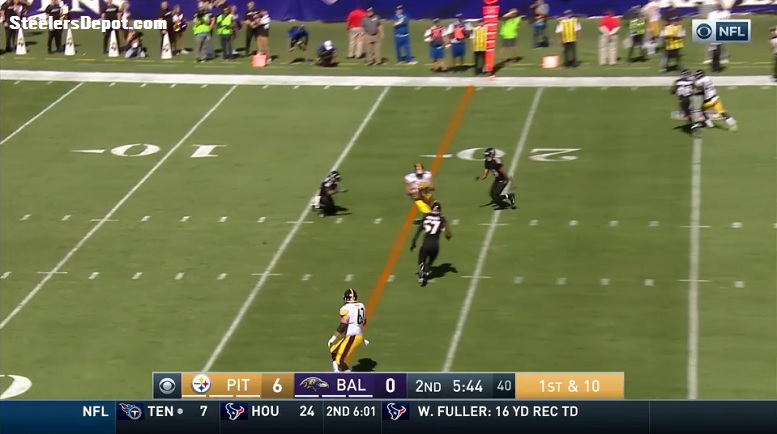 Pittsburgh Steelers quarterback Ben Roethlisberger missed a wide-open player in Sunday’s win over the Baltimore Ravens and during his post-game press conference he admitted he regrets it. No, it wasn’t wide receiver Antonio Brown that Roethlisberger regretted not seeing wide open during Sunday’s game, it was backup offensive lineman B.J. Finney.

The play in question, which you can see below, happened with just under six minutes left in the second quarter and it included Roethlisberger failing to connect with tight end Vance McDonald in the middle of the field on a 1st and 10 from the Ravens 28-yard-line. Finney had checked into the game for the play as an extra tight end and Roethlisberger proceeded to explain what happened next after the game was over.

“I’m so glad we won so we can go back and look at this and laugh,” Roethlisberger started to explain. “We had the wrong personnel on the field. We called a pass a play and he’s [Finney] actually an eligible tight end and looked at me and said, ‘Ben, what do I do?’ And I didn’t even realize he was on the field until we’re in the huddle and I said, ‘Finney, block first and just go to the flat.’

While Finney being open might be fun to laugh at after a game the Steelers won, the fact that the offense had the wrong personnel on the field is a bit discouraging. So, too, is the fact that the pass that was intended for McDonald was ultimately dropped by the tight end. That’s something that plagued McDonald during his time with the San Francisco 49ers and has now carried over with him as a member of the Steelers.

Hopefully that’s the last time we get to see Finney running a route this year and the last pass we see McDonald drop as well. With that said, I have feeling at least one of those two things will happen again.