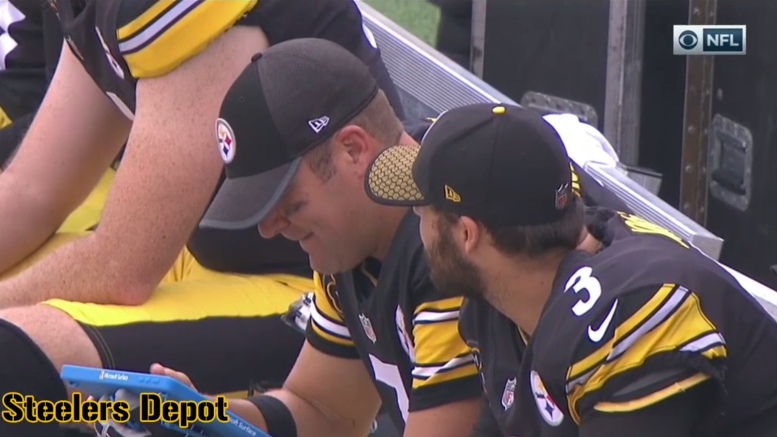 Much to the dismay of fans of the Pittsburgh Steelers, as well as running back Le’Veon Bell, the team didn’t run the football very much in Sunday’s home loss to the Jacksonville Jaguars. On Tuesday during his weekly interview on 93.7 The Fan, Steelers quarterback Ben Roethlisberger was asked about comments made by Bell on Monday about the running game not being the primary focus of the team’s game plan heading into Sunday’s contest against the Jaguars.

“Well, you know it’s kind of hard to run the ball when they’ve got 8 and 9 guys in the box,” Roethlisberger said. “There’s just not enough guys to block them. So that just dictates kind of we got to to throw the ball and we just need to be better at throwing it. We need to make plays. I’m sure guys are going to say things out of frustration. Maybe he really means it, maybe he’s frustrated like we all are after a loss at home.

“He’s one of the weapons that we need to use and use. I mean, we ran the ball with him, we’ve thrown the ball with him and he’s a very talented football player. But you’ve got to kind of take what the defense gives you sometimes and when they’re loading the box up, because I don’t want to sit there and say that we aren’t good enough running the ball, this, that and the other, because I think we do a great job of everything. We just need to be better at the details and the little things.”

Bell had 15 carries for 47 yards in Sunday’s game and didn’t sound too happy about that when he talked to the media on Monday.

“I think that’s just the formula for winning,” Bell said of running the football more. “The Jaguars ran the ball a lot of the time. You could see over the course of the game just wearing down the defense. Running the ball shortens the game and opens up the offense and makes passing the ball easier. It gets you in third-and-manageable downs. Over the course of the season, you’ll see the teams that run the ball heavy win games.”

Bell went on to say that he just runs the plays that are called. However, when asked if the Steelers game plan was to run the football against a Jaguars defense that entered Sunday’s game with the lowest-ranked statistical run defense, he said, “Um, no.”

Not that it will make a difference, but when the all-22 tape from Sundays game is released later today Ill have a look at how many times the Jaguars had 8 or 9 defenders in the box.

It will also be interesting to see if Steelers head coach Mike Tomlin is asked to confirm Roethlisberger’s Tuesday morning comments as well when he holds his noon press conference.