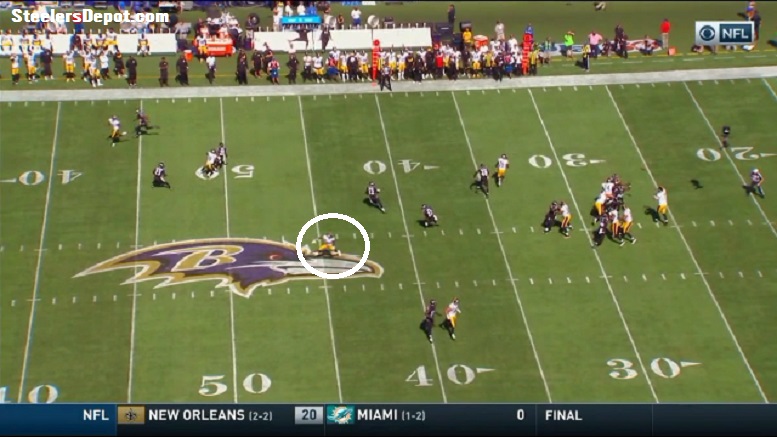 Pittsburgh Steelers wide receiver Antonio Brown will forever be remembered for his ‘Immaculate Extension’ game-winning touchdown with 13-seconds remaining in regulation against the Baltimore Ravens at Heinz Field. With that said, in Sunday’s Steelers road win over the Ravens, Brown had a ‘Tainted Tantrum’ that’s probably not going to be forgotten by several of the team’s players and fans for several weeks.

Brown’s sideline outburst Sunday in Baltimore, that included him throwing a water cooler in disgust and pulling away from offensive coordinator Todd Haley, who was attempting to calm him down, seems to be the biggest Steelers story as of Tuesday afternoon. Brown’s tantrum was seemingly a result of quarterback Ben Roethlisberger not throwing the football to him when he was wide-open during a second quarter third down and short play.

On the play in question, that I’ve already broken down for you in a recent post, Brown rubbed off his defender in the middle of the field via a mesh route concept that included tight end Jesse James before turning directly up the field without a Ravens player anywhere close to him. Roethlisberger ultimately decided to dump the football off to running back Le’Veon Bell on the opposite side of the field and that throw was a little high an ultimately incomplete.

During his Tuesday morning interview on 93.7 The Fan, Roethlisberger was asked to describe that play in detail and what led to him not throwing the football to a wide-open Brown.

“That play is designed to beat a man-concepted defense,” Roethlisberger said. “A.B. kind of runs the route and then takes off deep and it’s designed for man [coverage]. They gave us what was a 22-man look, so there’s two high safeties and everyone else is man underneath. So, as soon as I saw that defense on the pre snap, safety Eric Weddle ran back to kind of a two-high shell. A.B., instantly I’ve got to get off of him. I have to work the other side of the field where the two-man side concept-beater is.

“We talked about last week, if I would have just looked at A.B. and kind of forced it when I’m probably not supposed to. I may have seen him and he would have been open and we would have scored a touchdown. But because I was going with my reads and what I was supposed to do, as soon as the ball was snapped, I worked away from A.B. because that’s what my rules are and what I’m supposed to do. And it just so happens that Eric Weddle came down, A.B. went back and he’s wide-open. The DBs kind of got lost, they got turned around, they lost track of him. So, it looks really bad, it looks like I missed him and sometimes those things happen.”

For what it’s worth and that’s probably not much, Haley can be spotted on the Steelers sideline with his hands in the air before doubling over after Roethlisberger threw incomplete to Bell. One can only speculate that Haley thought Roethlisberger should have seen Brown and thrown him the football. Perhaps Haley will be asked about that play and his subsequent reaction during his Thursday session with the media.

As far as I can tell, the Steelers last ran that play in their 2016 AFC Championship game loss to the New England Patriots. That instance of that play, however, included fellow Steelers wide receiver Eli Rogers being the target of Roethlisberger down the field. Rogers, however, didn’t do a great job with his route and it resulted in his defender remaining tight in coverage. The pass fell incomplete.

Will we see this play again this season? Probably, but being as there’s been so much fuss about it this week, we might have to wait until later in the season before the Steelers run it again.