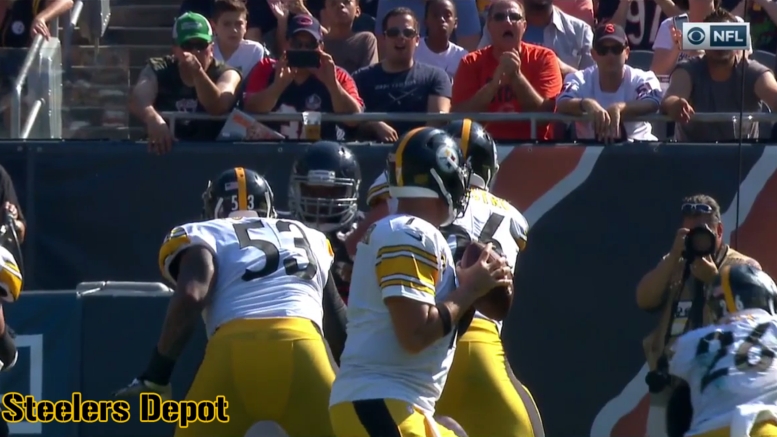 The offense has on average in those three games scored 19 points, with the special teams unit also chipping in a touchdown of their own for good measure. That kind of productivity on the offensive side of the ball is simply not going to cut it for much longer, something that is not very difficult at all to observe.

I don’t think it takes a great mind, either, to recognize that so far the Steelers’ biggest problem on offense has been, simply, themselves. This was the same conclusion that Mike Renner of Pro Football Focus reached in an article written last week in the wake of the Bears loss.

“At the end of the day though, a lot of what has stopped the Steelers passing game this season has been the Steelers themselves”, he wrote. “More specifically, quarterback Ben Roethlisberger. This is a downfield passing offense. This is an offense uniquely qualified to generate big plays”.

But, he went on, “the thing about an offense like that though is that there are only so many chances at big plays in a game. You can’t run vertical concepts every single play, but the times you do, you better hit one”.

And he argues that Roethlisberger has not been hitting on as many of the big plays so far this season as they need him to be, and has he has in the past, especially last year, when he threw 13 touchdowns on deep passes to lead the league. None of his five touchdowns this year have come on deep passes, and only one has been for more than seven yards.

Renner talks about two joined statistics in the article, one of which I have talked about before, which is called turnover-worthy throws. These are throws that were deserving of producing an interception, whether or not one was made. This does not include interceptions off of good throws.

The other statistic is called ‘big-time throws’, which accounts for a quarterback’s accuracy on big plays down the field. He was credited for the deep pass on the opening game to Martavis Bryant, for example, in spite of the fact that the wide receiver dropped it.

But, Renner argues, his ratio of big-time throws to turnover-worthy ones is the worst that it has been in recent years, and that his success on big-time throws is at an all-time low for him. “If Roethlisberger can’t consistently make plays down the field”, he concluded, “the offense will stall”.