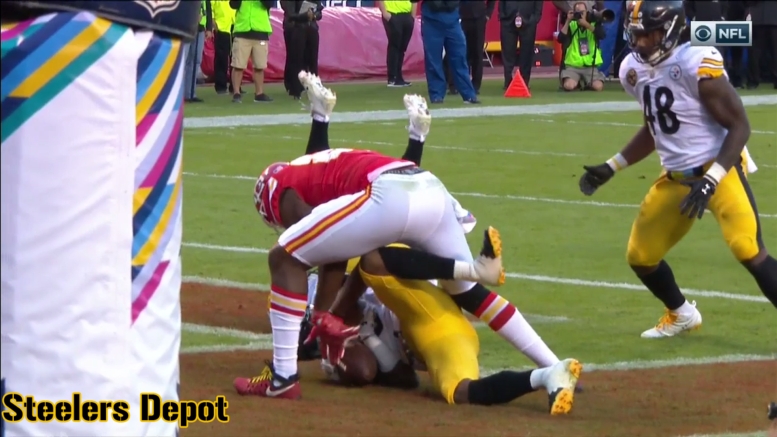 The Pittsburgh Steelers entered today’s game struggling in three of four crucial, crucial areas of situational football. The defense has been strong on third downs, but the offense has not, and neither side of the ball has done well in the red zone.

But they went three for four tonight—sort of—as the offense completed half of their third-down conversions, though they went one-for-three in the red zone, and the defense stopped the Lions on 10 of 12 third-down attempts.

But the game was won in the red zone, where the defense held Detroit oh-fer, 0-for-5 inside the red zone throughout the game, and 0-for-3 in goal-to go situations. The Lions’ scoring was limited to just five field goals, and the defense stopped them twice on fourth down within the 20-yard line.

It was a huge, and crucial, showing for a defense that had been struggling once they allowed offense to get into scoring range. The Steelers had actually been solid all season in keeping teams out of scoring position, outside of offensive turnovers, but struggled in the red zone.

Tonight’s game was the polar opposite. The Lions had very little difficulty moving the ball, gaining nearly twice as many yards as the Steelers had allowed on average per game leading up to this one, but they could not get into the end zone at all in spite of the fact that they had a number of quality opportunities to do so.

Detroit’s first trip into the red zone was early in the second quarter, hitting on a 33-yard pass to the 10, goal to go. A holding call pushed them back to the 20, and they followed with a one-yard run and two incomplete passes to settle for a field goal.

They got back into the red zone at the end of the half, first and goal at the 16, but that is as close as they would get, as they threw three straight incompletions, settling for yet another field goal, their fourth of the game at the time.

Early in the second half, they had first and goal at the four, and second and goal from the one, but Matthew Stafford threw incomplete and then Dwayne Washington was stuffed for no gain by Javon Hargrave and Vince Williams.

It didn’t take long for the Lions to get back there, though. After the Steelers stuck for a 97-yard touchdown, they again had first and goal from the four. An incomplete pass and two runs for three yards forced them to settle for a field goal.

Finally, trailing by five, Detoit’s final possession saw them reach the 11-yard line with a first-and-10. They got to third and five, but Theo Riddick was stuffed for a loss of two. On fourth down, Stafford was pressured and threw incomplete, nearly picked off by Ryan Shazier, Hargrave supplying the pressure.

The defense certainly bent about as far as they possibly could, but they truly did not break. And they limited a high-scoring offense to just 15 points on their own turf. It wasn’t pretty, but you take it.