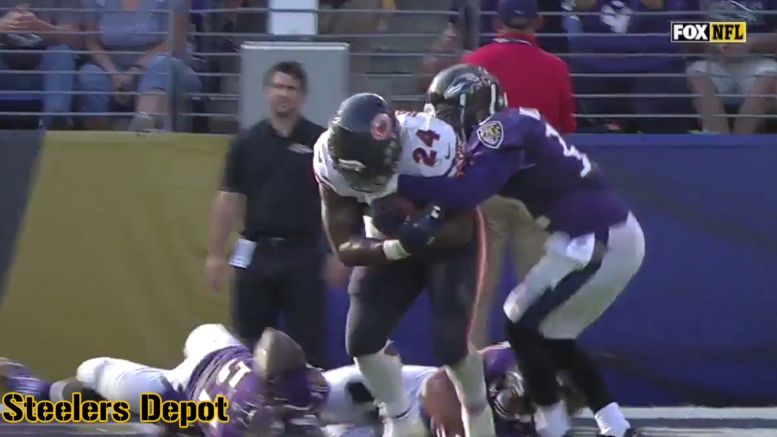 The last time the Pittsburgh Steelers entered a game knowing that they had a chance to take a game lead over the Baltimore Ravens in the AFC North after the latter lost, they dropped an ugly game in Chicago.

Yesterday, Ravens dropped an ugly one—to Chicago, in Baltimore—and Pittsburgh went on to beat the latest remaining undefeated team on their home turf. And as badly as the Bears ran over the Steelers, they did the same to the Ravens, facing the worst rushing performance of the history of their franchise.

Amidst the 27-24 overtime loss, Baltimore surrendered 231 yards on the ground to the Bears on 54 rushing attempts, averaging 4.3 yards per attempt despite being dropped for a loss on 10 of those plays for a combined 32 negative yards.

Second-year running back Jordan Howard was the workhorse once again for Chicago, running the ball 36 times and compiling             167 yards for his labors. That included a long 53-yard run on the team’s second possession in overtime that helped set up the game-winning field goal.

Tarik Cohen, however, they held in check, limiting him to only 32 yards on 14 rushes, but the defense was also burned by quarterback Mitchell Trubisky, who gained 32 yards on four rushes. None of them actually scored a touchdown, but Cohen did throw for one on a 21-yard pass.

This is fodder for another day, but Joe Flacco continued to play poorly, completing only 24 of 41 passes for 180 yards for 4.4 yards per pass attempt, adding another two interceptions to his total without a touchdown. The Ravens actually had two returns for touchdowns, the first a fluky kick return on which everybody assumed the returner was down by contact initially.

Baltmore’s only offense on the day came from their kicker, Justin Tucker, who made all three of his attempt, with a long of 50 yards. But they were also without Jeremy Maclin and Terrance West, and lost Breshad Perriman and Maxx Williams during the game, continuing a brutal pattern of injuries.

The Ravens entered this season expecting the glide by on the backs of their vaunted defense, but, due in large part to the fact that their defensive line has been banged up, they have not been up to the task since beating up on two bad teams to start the season.

They are 1-3 over the course of the past three games, only beating a Raiders team without their starting quarterback, and the ground game has been a big issue. Brandon Williams, their big-money nose tackle, has missed that full stretch, and they also lost 2017 starter Brent Urban for the year.

To add to the misery, Carl Davis, who had been running in their stead, was out for yesterday’s game, leaving much of the burden upon the shoulders of second-year players Michael Pierce and Willie Henry. They had better hope that a return to health will be enough to fix their issue.