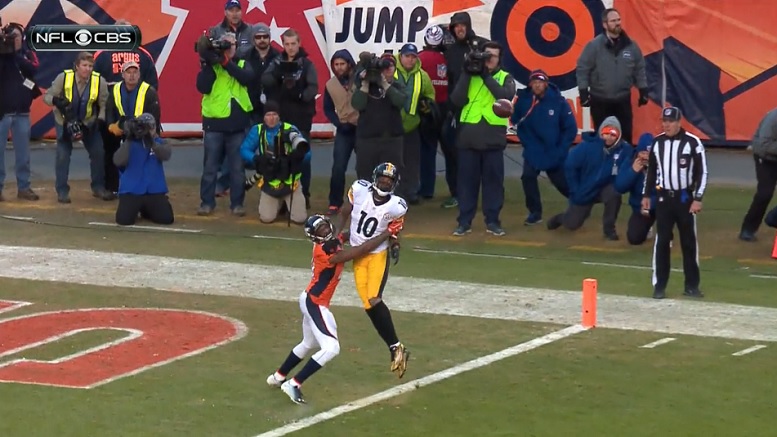 So what is the value of a third-year wide receiver who has missed 20 of 55 possible games due to drug suspensions and who is vocally saying that he either needs to be featured in the offense or dished to another team, who would have the same problem on their hands if they didn’t feature him?

According to Pro Football Focus, it’s a seventh-round pick. At least that is the compensation that they projected in an article yesterday about deadline deals “that make sense”, seeing the Steelers ship off the former fourth-round pick to the Broncos at that price.

“Much has been said about the disgruntled nature that is the Martavis Bryant-Pittsburgh Steelers relationship right now”, the excerpt from the article begins. “Bryant has been told he will be inactive for the Steelers’ Week 8 contest at the Lions. With the emergence of Smith-Schuster (3 TDs on 17 receptions), Bryant’s production has plummeted and now relegated him to discussions of a trade. One suitor that makes the most sense is the WR-needy Denver Broncos”.

Of course, those “discussions” don’t mean very much in light of the fact that both Mike Tomlin and, more importantly, Art Rooney II have said that they have no plans of trading him and that he is not available for trade. It’s hard to imagine that changing in just a few days.

Never the less, the article notes that the Broncos have battled injuries at wide receiver extensively this year, with former Steeler Emmanuel Sanders suffering an ankle injury, missing last week’s loss to the Chargers. Demaryius Thomas has also been banged up.

“Bryant could potentially suit up outside or in the slot for the Broncos, either with great success”, the article continued. “He is a legitimate deep threat whenever he is on the field evidenced by his 318 yards and three touchdowns on passes targeted 20 or more yards downfield in his last season of full action”.

That doesn’t really take into account the fact that his productivity has been nowhere close to that this season, nearly halfway through the year. It’s fair to say that some of that is on the quarterback play, and perhaps a bit on the play-calling—they have been run-heavy by design in three of the past four games.

But a lot of it is just on Bryant not being the same player he was—at least yet—two years ago. Which is a big reason why even PFF believes a seventh-round pick is fair compensation for him. if he is really that good, even considering his baggage, that is great value for the Broncos with a year and a half of control on him.

Not that this is going to happen. But it’s a fun mental exercise to think about.