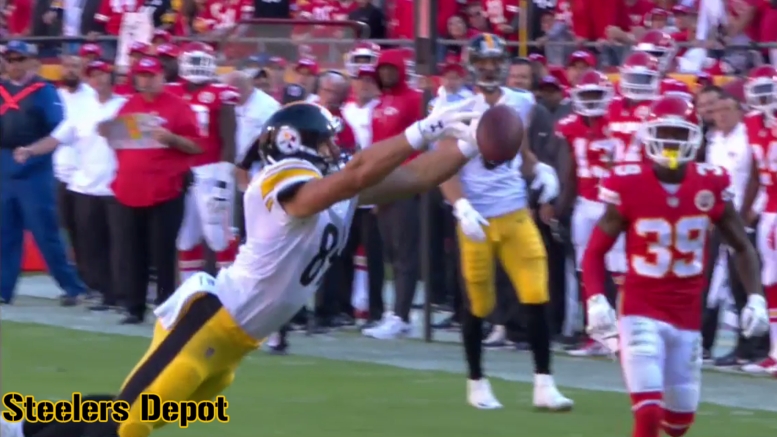 Say what you will about the fans at Heinz Field chanting “HEEEEEEEEEAAATH” for any reception made by a white tight end, but, in a way, Pittsburgh Steelers white tight end Vance McDonald is looking forward to getting his first, and he is hoping that it comes tomorrow against the Bengals.

The former second-round pick, acquired via trade during the preseason, finally got his first catch as a Steeler last week, on the road in Kansas City, for a 26-yard gain. His first five official targets all ended in incompletions, the first two of which should have been receptions. Another was intercepted.

“I haven’t gotten one yet”, who said of hearing the chant. “Sure, absolutely. Who wouldn’t” want to hear it, he asked. Whether or not it makes sense, or is respectful, it is a sign of a job well-done, either way, so if it’s going to come anyway, then you want to hear it, because it means you’ve done your job.

He knows the first reception was a big monkey off his back, and it was a critical one, as well. “It’s a big situation in the game and a lot of stress on the offense”, he said of the circumstances in which it came, backed up near their own end zone. “You’re thinking, ‘we’ve got to get at least one first down’. It’s nice, you get the first one and we’re just going to build on it”.

It shouldn’t be shocking that McDonald’s rapport with quarterback Ben Roethlisberger might not exactly be right on the money at the moment. After all, he has only been in here for a couple of months, and missed the most formative elements of the offseason. He knows it can only come with time.

That’s not to say that Roethlisberger isn’t excited about what the former second-round pick could do, and the quarterback has been complimentary of him multiple times, saying after Sunday’s game that he wants to see him more involved in the offense now that he has more of it under his belt.

“There’s always things you’re thinking about, as far as turning plays as a playmaker, as a receiver. I had some big plays last year, and I’m looking to contribute that here in Pittsburgh”, he went on to say. “If it’s a big play we’re needing, I’m hoping I can make it and help us win games. Because it’s fun when you’re winning”.

He didn’t do a whole lot of winning with the 49ers, of course. San Francisco won just seven games over the course of the previous two seasons, and went 8-8 the year before, though he was there in 2013 for the final season of John Harbaugh, in which they went 12-4.