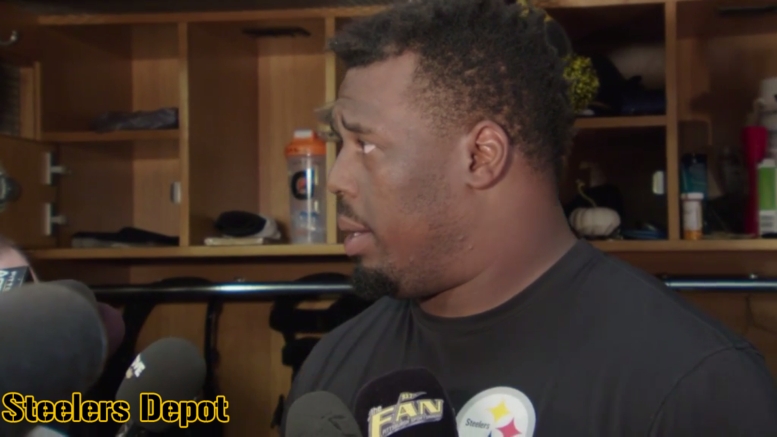 I’m not sure what Pittsburgh Steelers right tackle Marcus Gilbert is more fired up about: returning after sitting out the past three games with a hamstring injury, or getting the opportunity to right the wrongs of the past three weeks, which has seen the team go 1-2 in his absence.

“We have a demeanor about ourselves. The games that we’re supposed to win, we didn’t do so, and I think a lot of guys are a little on edge”, the seventh-year veteran told reporters yesterday in a locker room interview.

“And then me coming back, I feel a little urgency”, he added. “I missed a lot of time, and I feel like I have really fresh legs. I’m just ready to be back out there with my guys”. Gilbert also missed three games last season due to a foot injury, and, honestly, has a history of injuries, though often relatively minor.

While he didn’t really seem to address it directly, I do think he understands the importance of the line getting him back in advance of Sunday’s game against the Chiefs, as Kansas City boasts easily one of the best edge rushers off the right side in the NFL in Justin Houston. He had his issues with Houston in the past, but has played him well lately.

“They’re undefeated, we’re not”, he said generally about facing the 5-0 Chiefs. “We’ve been struggling a little bit. But the thing about our team is, we have a lot of vets. We’ve been here before. We know how to handle adversity. We have great leadership”.

Many, of course, would be inclined to disagree with that at the moment, instead seeing signs of fraying at the seams. It goes without saying that, outside of a rogue incident, though, a player is not going to come out and say that they lack leadership and can’t handle adversity.

He also certainly wasn’t quick to badmouth Chris Hubbard, who has started in his stead six times over the course of the past 17 regular season games. “He’s done a great job”, Gilbert said of the fourth-year lineman, “but just moving him around, even at the tight end position, helps us big time. Just to move those big bodies out there, it’s critical”, a comment that suggests the tackle-eligible remains in the cards.

And when it comes to questioning his quarterback, he wasn’t having any of it. “He looks at this and he laughs at it, I call it a little mind game”, he said of Ben Roethlisberger’s post-game comments. “You guys can believe whatever y’all want to believe, I just know he’s going to be ready whenever this Sunday comes, you better believe that”.

“He’s not frustrated at all”, he said. “He’s proven himself, there’s not much to be said”. He also pointed out that the team as a whole shared a lot of blame for the interceptions. He was hit on at least one of them, while another came off a tipped pass and a third saw a receiver trip on a route.