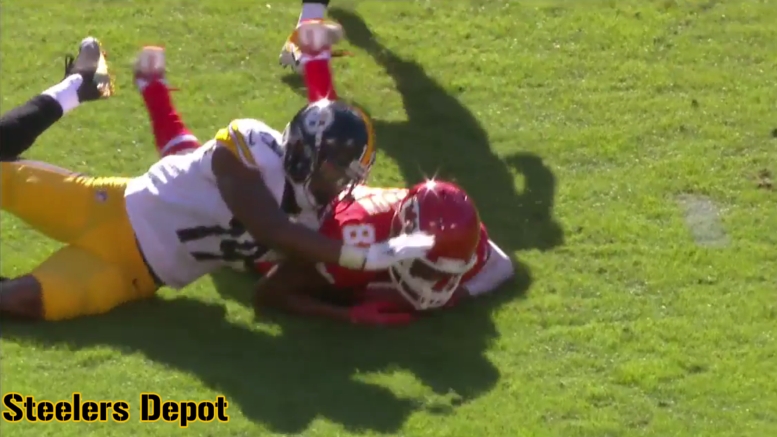 The Pittsburgh Steelers got off to a roaring start on special teams this season, including scoring their first points of the year off a blocked punt that was returned for a touchdown. The following week, they successfully defended a fake punt on a pass attempt that was batted down—both plays delivered by Tyler Matakevich.

It started to go sound after that. in the third game of the season, Eli Rogers muffed a punt that the Bears recovered, eventually scoring a touchdown on that drive. Later in the same game, they had a blocked field goal that should have been returned for a touchdown.

And Sunday’s game was more of the same, another generally poor day for Danny Smith’s unit. Including a touchback on a punt, a 32-yard return allowed in the clutch, and this time Antonio Brown muffing a punt, there were a number of things that went wrong on the day.

None were so egregious and frankly infuriating as that which happened in the middle of the first quarter, which no doubt sent waves of groans and mutterings of not again through Steelers fandom.

Pittsburgh got a break when the Chiefs accidentally snapped the football out of the back of the end zone for a safety on a second and 17 play from Kansas City’s nine-yard line. That gave them a two-point lead, and what should have been possession of the ball.

What followed was the conventional free-kick attempt, but the fielding attempt was anything but. It’s not as though you don’t already know this, but with Brown and JuJu Smith-Schuster aligned back to receive the kick, neither of them managed to do so, and the Chiefs were able to fall on the loose ball, gaining possession of the Steelers’ 32-yard line.

The ball bounced at pretty much exactly the 35-yard line, about five yards to the left of the hash marks on the Steelers’ offensive left side, and proceeded to bounce backward and to the right, ending up on the far hash mark at the 33.

While I know intuitively that it has happened before, it is frankly something that I simply can’t remember ever seeing. Truthfully, there is no excuse for a team being unable to successfully field a free kick.

Instead of running up under the kick, Brown, about two yards shy of the ball and to the left, chose to let it bounce. It’s not clear if he thought Smith-Schuster was to his right or what, but the bottom line is that neither of them were actually able to get the job done.

Unfortunately, Game Pass’ incompetence this year seems to not even have the coaches film of this play available