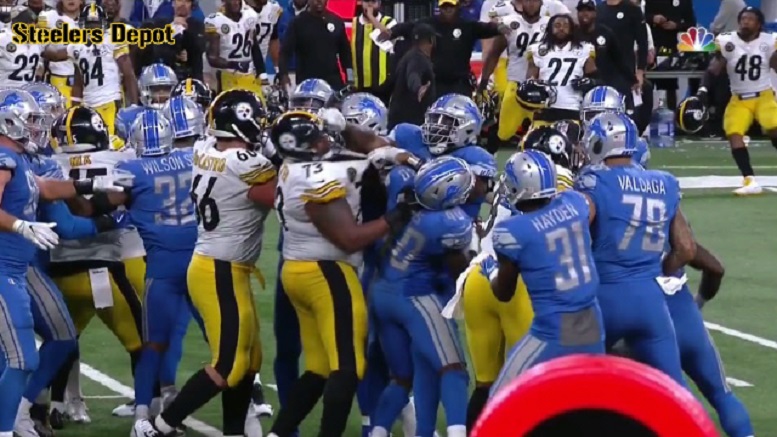 In the closing seconds of what seemed to be a fairly clean game between the Pittsburgh Steelers and the Detroit Lions on the surface, emotions boiled over and it resulted in one player being ejected. That player was Lions defensive tackle A’Shawn Robinson as he was tossed from the end of Detroit’s 20-15 loss to the Steelers after he threw two punches at Pittsburgh guard Ramon Foster following a late scrum during a kneel-down play.

That incident, according to Dave Birkett of the Detroit Free Press, was the culmination of what Lions defensive tackle Akeem Spence called “a mean football game.”

After the game, Spence reportedly accused the Steelers of dirty play throughout the contest and claimed that is what ignited the end-of-game skirmish when he and Robinson fired off the ball on the snap when the Steelers offense taking a knee to run out the final seconds on the clock.

Spence later added that play “was chippy the whole game” Sunday night and he accused the Steelers of taking “head shots” and delivering hits to the face masks of Lions defensive linemen.

“I think I got high-lowed a couple times,” Spence said, according to Birkett. “Guys came back around, chopped me in the legs. it was just a mean football game, man.”

During that late-game brouhaha, Steelers center Maurkice Pouncey looked like he threw a few punches at a Lions player. He, however, wasn’t flagged and tossed from the game like Robinson was.

Just because Pouncey wasn’t flagged for his punches doesn’t mean that he won’t ultimately be fined by the league for them. In fact, it will be surprising if he and Robinson aren’t both fined for their actions late in the game. Even so, Pouncey denied the dirty play accusation on Monday.

“You have to show sportsmanship,” Pouncey told ESPN. “You just lost the game. We’re taking a knee. What are you trying to prove right now? If anybody’s playing (dirty), that’s dirty s— right there. They literally tried to attack me, come off 100 miles per hour. I ain’t going for that … Do it during the game. You want to do it while we’re taking a knee? It’s a general rule of sportsmanship. You don’t do that type of s—.”

As for Spence’s claim that the Steelers offensive linemen played dirty throughout the game, we’ll have to see if the all-22 tape backs that up when it’s released in the next several hours.