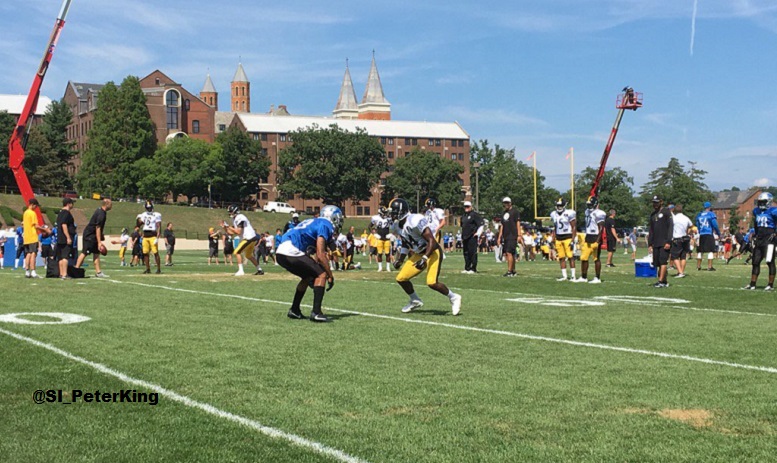 Being an eighth-year veteran, Pittsburgh Steelers wide receiver Antonio Brown has seen and gone up against his fair share of quality cornerbacks, and sure, he has had a variety of success against them. Wide receivers can’t always dictate how many opportunities they are going to get over the course of a game; they can only try to consistently get open.

Detroit Lions cornerback Darius Slay would like to think of himself as Brown’s toughest task of the season to date, and is looking forward to facing the All-Pro. “He’s one of the best in the business and he brings his game”, he told the Detroit Free Press. “I mean, his film talks for itself so ain’t much I can say that y’all already don’t know. He’s a very exciting player, very important to his team and he’s a serious game-changer”.

But Slay is willing to put up his resume this season against anybody. He has already helped keep wide receivers like Julio Jones and Odell Beckham, Jr. in check this year. The only one, in his mind, who really made some plays against him was Kelvin Benjamin of the Panthers.

“My worst game is against Benjamin. Well, I wouldn’t really consider it the worst. He just made a great catch. Made two big catches on me, that was it”, he said. “I think that’s all he caught the whole game, so I don’t really think that was a bad game. He just made a better play than me then. But other than that, I think I’ve been playing pretty solid”.

He admitted to the paper that Benjamin’s size gave him some issues, so going up against a short receiver like Brown will put him closer to his comfort zone in terms of the body type that he feels good defending against.

The two did see each other last year when the Steelers and the Lions held a joint practice session during training camp, so they are not entirely new to each other. And, by the way, Brown kind of controlled that matchup between the two, though it’s easier for the wide receiver in that kind of setting.

In size games, Slay already has a career-high three interceptions with eight passes defensed. According to Pro Football Focus, though, he has allowed 24 receptions on 38 targets. That has yielded 276 yards with 68 after the catch. While he has three interceptions, he has also been docked for three touchdowns.