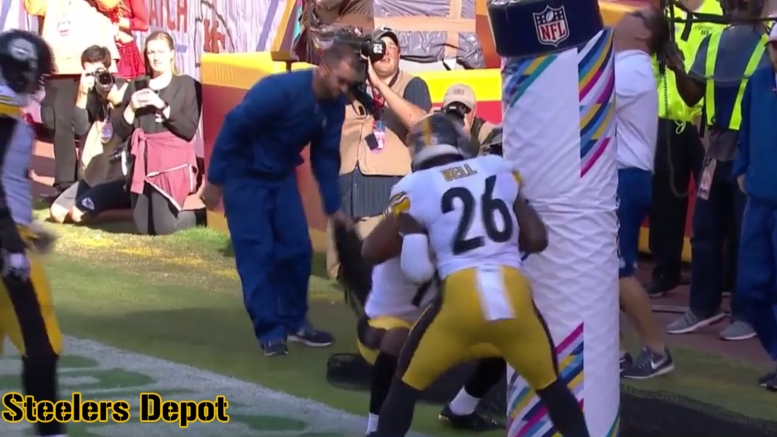 The Pittsburgh Steelers bounced back in a big way tonight against the previously-undefeated Chiefs, and with it did the running game, having easily their best showing of the season behind a fantastic showing from Le’Veon Bell.

While it took him 32 carries, the fifth-year veteran running back compiled a 179-yard rushing day to go along with his fourth touchdown, all of which have come from within three yards of the goal line, if I’m not mistaken.

And it won’t be a surprise to learn that much of that success was predicated upon the offensive line—and the tight ends, and the fullback—doing their jobs better than they have in four of the past five weeks, giving Bell the opportunities to make plays. When they did not, Bell continued to be hit for losses.

There is only so much that a running back can do on his own, and Bell did about everything that he could all by himself tonight, doing it early and often, finishing the first half with 99 yards on the ground, the most that he has ever had in his career…and then added another 80 to close things out.

His 5.6 yards per rush average on the day was by far his most efficient showing of the season by a full yard and a half, and only the third time in six games in which he has averaged at least four yards per carry, but with the big day, he has made his season totals to date look much better.

Bell has now already rushed 134 times on the season, well on pace for over 300, and now has 550 rushing yards, averaging almost 92 rushing yards per game. As of this writing, that would place him second in the league in rushing now behind only the Chiefs’ Kareem Hunt, who entered the day with 609 but who had just 12 on the ground.

It was just another day at the office for him, however, when it comes to playing the Chiefs. Last year, he rushed for 144 yards on 18 carries and then 170 yards on 30 with two touchdowns. The year before, he had 121 yards on 17 carries.

Bell really looked to be almost fully in rhythm and in sync, with the only real blemish I could note during the game coming on a check-down pass on which he failed to pick up a first down that clearly looked to me very makeable.

It seems clear to me that this is the recipe going forward for the offense. Although they still sabotaged their own efforts, the running game as the focal point has been advantageous to them over the course of the past 13 games, going 11-2 in that span during the regular season.