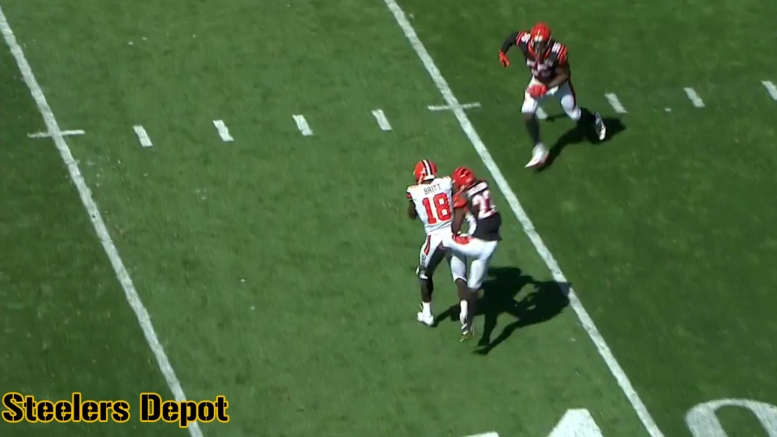 I’m not a college football guy and probably never will be. I watch what I need to in order to be informed, but I don’t actively follow teams, let alone root for them. Still, I went to Rutgers in the mid-to-late 2000s during basically the only period in which they were good, so those players still mean something to me.

Of course, Ray Rice punched his way right out of my heart, but on the field, he was something else, easily the nucleus of that team. But there were others as well, especially wide receiver Kenny Britt, a New Jersey native.

A first-round pick in 2009, he never really lived up to his potential, putting together really only a couple of solid seasons, including last year with a bad Rams team for his first 1000-yard campaign. And that earned him…a free agent contract with the Browns. Way to go.

But that isn’t going so well. Brought in to replace Terrelle Pryor, he has done anything but, routinely finding himself the object of ire. From a big dropped pass in the season opener against the Steelers to he and Corey Coleman missing curfew before last week’s game, Cleveland is getting tired of his antics.

As Mary Kay Cabot writes, “he’s skating on very thin ice and has no margin for error”, pointing out that he had already been called into the head coach’s office and instructed “to be the elder statesman needed on the receiving corps”. But his evident immaturity is not have the desired impact.

Hue Jackson said during the week—when asked, mind you—that he still has a chance to salvage his season over the course of the final 20 games. “He needs to go out and make plays for the football team, create separation for the quarterback…and be a steadying influence among the group as we go forward. I think he can do that”.

At the moment, active for only four games, Britt has caught eight passes for 121 yards and one touchdown for the Browns. One wonders how much, if at all, he would be playing right now had it not been for Coleman suffering a hand injury that will have him on the sidelines for a while.

There are currently six players who have caught more passes for the Browns to date than has Britt, and that does not include Coleman, who is currently on injured reserve. There are also four players who have gained more receiving yards, though rookie tight end David Njoku is the only player on the roster with more than one receiving touchdown, such is the state of their passing game.

If the Browns really want to see what they have in rookie quarterback DeShone Kizer, then they need to at least provide him with some stable and reliable targets in the passing game. As much as it pains me to say of a Rutgers alum from their short-lived heyday, Britt has never and will never be that.