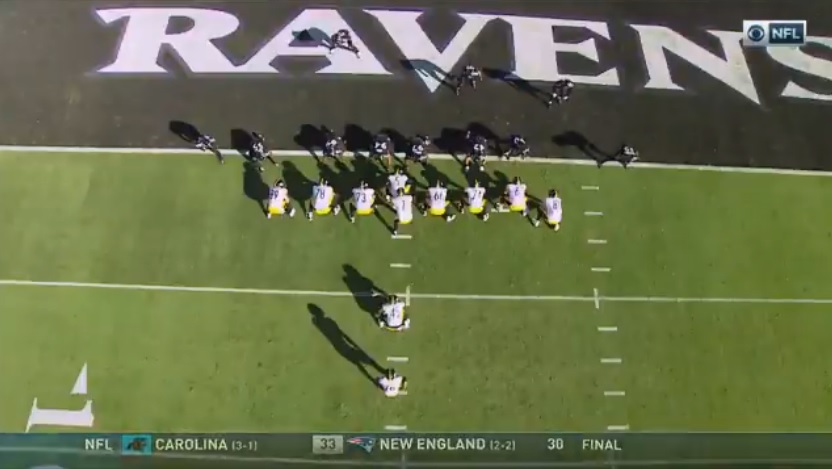 It seemed to be too good to be true but the Pittsburgh Steelers seemed to be cruising to an easy road victory over the Baltimore Ravens. In a battle of two halves, the Steelers were able to hold off a late Ravens resurgence to scrape out a 26-9 victory.

Le’Veon Bell promised the team would “go nuts” earlier in the week and the running back delivered, adding two touchdowns, with one coming in each half. Bell was worked all afternoon, finishing with 38 total touches for over 180 yards of offense.

While the first half was dominated by the Steelers, the third quarter was a different, more familiar tale. Filled with lackluster execution, penalties and a questionable officiating call, the Ravens were able to sneak their way back into the game.

It all began with the Steelers up 19-0 early in the third quarter, when a questionable call turned the tide in the Ravens favor. In what looked to be catch by Antonio Brown was overturned into an Eric Weddle interception. The controversial interception was Ben Roethlisberger’s only interception of the day and would lead directly to the Ravens’ first points of the day, cutting their deficit to 19-3.

Though Roethlisberger would have that controversial interception alongside his name, the Steelers quarterback put together a fine road performance, finishing 18/30 for 216 yards and a passing touchdown.

The Steelers’ brutal third quarter was not finished yet as a Chris Boswell missed field goal would lead to a Ravens touchdown, coming from the hands of former Steelers wide receiver Mike Wallace, now cutting the Steelers lead to 19-9. Heading into the fourth quarter, it seemed that the Steelers were about to get into their usual fourth quarter dramatics against the Ravens.

Though the Steelers’ offense seemed to be giving their best effort to allow the Ravens to scratch back into the game, the defense was not ready for a repeat of last week. With secondary leader Mike Mitchell inactive, it was Ryan Shazier and Cameron Heyward making sure that the Steelers would emerge victorious.

Heyward was in Joe Flacco’s face all game long, finishing with two sacks and a fumble recovery. Those two sacks by Heyward were half of the Steelers’ total of four on the day. That pressure caused by Heyward and other Steelers’ defenders rattled Flacco, leading to the quarterback throwing two fourth quarter interceptions – one to Shazier and the other to Mike Hilton. The latter being an interception that would come with just over five minutes remaining, sealing the Ravens fate.

In the victory, the Steelers do what they have not done in five seasons – get a hard-fought road victory in Baltimore. Now at 3-1, the Steelers will look to build off their divisional victory and return home next Sunday to take on the Jacksonville Jaguars at 1pm.