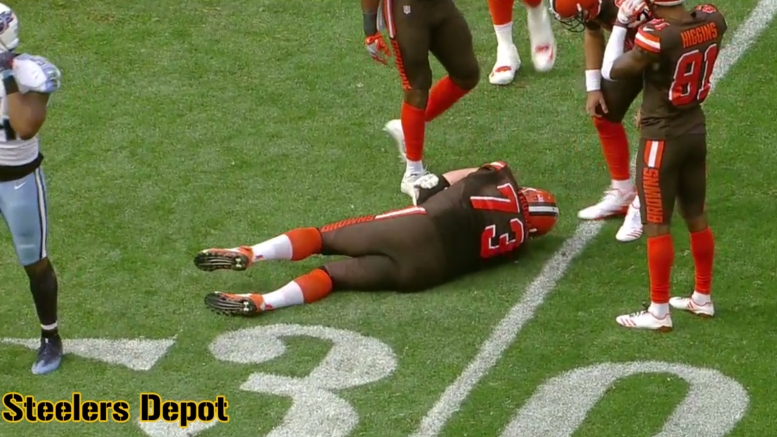 The Cleveland Browns’ latest run through the Factory of Sadness took its greatest casualty yet yesterday afternoon in yet another embarrassing game for a regime that is currently 1-22 over the course of the first 23 games of its tenure.

Hue Jackson’s time in Cleveland has been so bad that it claimed the longest known snap streak in NFL history, owned by 2017 first-round left tackle Joe Thomas, who from the first snap of his career to at some point yesterday never came off the field, playing over 10,000 consecutive plays, an astounding feat that I honored after it happened.

It is quite sad that it has now come to an end—to be specific, at 10,363 snaps—against the Titans with what is reportedly a torn tricep. That injury can end careers, or at least be the beginning of the end of one, resulting in recurring injuries in the future.

Thomas, annually and justifiably classified as One Of The Good Guys™, has by rights been the face of the franchise for the past decade. Frankly, he is by far the longest-tenured player there, after all, and has been, every year over the span of his 11-year career, the best player on the field.

The likely first-ballot Hall-of-Famer suffered the injury to his left arm with a little under six minutes to play in the third quarter in Cleveland while grappling with a defender blocking for a run. According to Pat McManamon, he told reporters that “he lost the use of his left arm, which would be a symptom of a tendon tear”.

“I really didn’t have any function in my left arm”, he said after the game. “I think you can play about 30 or 40 percent function with your one arm, but when you have no function in one arm, it’s hard to block edge rushers with only one hand”. I am going to take his word for it.

His left guard, Joel Bitonio, described Thomas’ stability and long-term healthiness as “honestly a miracle in its own self”. He told reporters that the veteran “really held the team together”, saying, “for as many losses as he’s endured, for his spirit to come into work every day and be part of the team and just be his cheery self…to try and bring the guys around him…it’s really tough”.

Many, many, many great players have chosen to flee Cleveland in free agency, and it is said to be a destination in which free agency frequently turn down more money in order to play with a more competitive team. That Thomas has stayed put through such dismal failure is, to paraphrase Bitonio, yet another miracle unto itself.