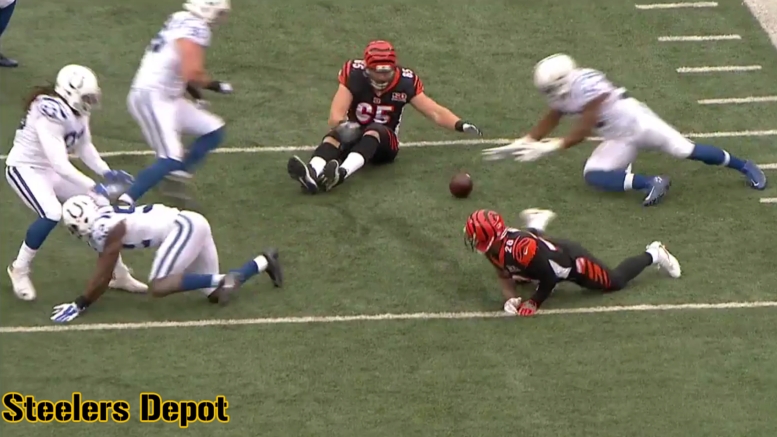 Cincinnati Bengals rookie running back Joe Mixon was none too impressed with the showing of his counterpart on the other side of the field last week, Le’Veon Bell of the Pittsburgh Steelers, who rushed for over 130 yards against his team while the second-round pick spent much of the second half standing idle on the sidelines.

As the veteran drew praise for his strong performance, Mixon took a shot at him, saying that if he were given the same opportunities, he would deliver the same results. Yesterday was his first chance since that game to try to prove that he was right, and he fumbled in the effort—literally.

He wasn’t given the sort of workload on the ground that Bell had seen—he carried just 11 times yesterday against the Colts—but his performance did not justify giving him more carries. He gained just 18 total yards on those touches, seven coming on one run. he gained just 11 yards on the other 10 rushing attempts.

He did have an impact in the passing game, leading the way with a big 67-yard reception. In all, he had three catches for 91 yards. But he fumbled the ball and lost it, and he didn’t score. I have no doubt that Bell took glee in the fact that somebody who he called out on Twitter as an imitator could not duplicate his success.

Not that he tore up the field yesterday, either. He gained just 76 yards on 25 rushes, barely averaging three yards per carry, but he did have an impressive, patient five-yard touchdown run. He only caught two passes and gained five yards off of them.

And he did fumble, too. Having just successfully converted on third and one from the Lions’ 23-yard line with a one-yard run, Bell had the ball stripped from his arm and recovered by Detroit with under a minute to play in the half. Looking to go up at least 13-9, the Lions instead took a 12-10 halftime lead thanks to that.

Mixon’s fumble also converted a third down, an eight-yard reception on third and six, before he had the ball stripped loose, and the Colts were able to turn that possession into a field goal that gave them a 23-17 lead early in the fourth quarter.

He ended up getting bailed out by Carlos Dunlap, who tipped a pass at the line of scrimmage at the 20-yard line, catching it at the 16 and returning it for the go-ahead and-game winning score.

Both the originator and the imitator showed chinks in their armor on the field yesterday, and both of them have their defense to thank, largely, for helping to minimize the cost of their errors.

But Mixon still has an awful lot to prove before he should open his mouth again about making comparisons between himself and others. He’s only averaging three yards per carry with one touchdown, and fumbles in consecutive games.