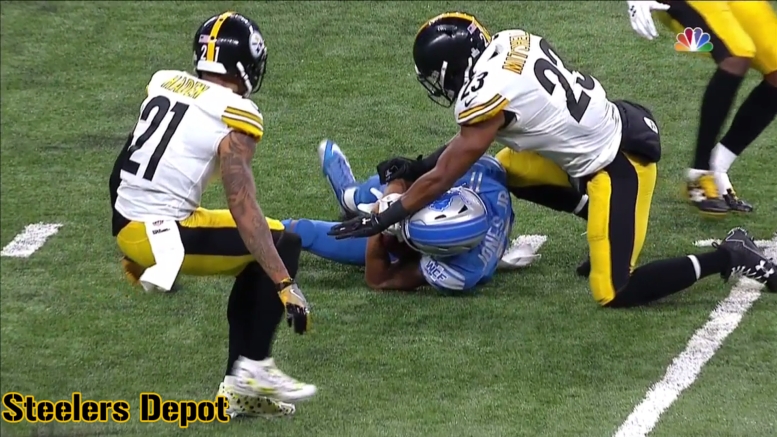 Pittsburgh Steelers cornerback Joe Haden is experiencing a lot of firsts for himself this season—or at least rare occurrences—after coming over to the black and gold from the Cleveland Browns, where he spent his first seven seasons before being cut in August in a cap-saving move.

Having played for the Browns, and not to put too fine a point on it, but Haden has not had the opportunity to experience a lot of winning. In fact, with the Steelers now four games over .500 with a 6-2 record, this is the first time that he has ever experienced such success. I think the best record he has seen was a few years ago when they are 7-5 before losing their final four games.

Not only is he getting a taste of what it’s like to win games consistently, he is also getting a taste of some situational success that he hasn’t been all too familiar with, either. So when the defense kept the Lions out of the end zone on five trips inside the 20-yard line, it was quite a sweet taste for him.

“Oh my goodness, it feels so good when you do that”, he said. It’s not too often, after all, that you can allow a team to get into the red zone five times in a game without actually letting them crack the goal line even once.

He said that head coach Mike Tomlin had a special address for the defense during the lead-up to the game, setting high expectations for the unit. “He loves to challenge us and we take on his challenges because we know he believes in us’, he said.

“He wouldn’t challenge us with stuff we couldn’t do. We feel like we have a good defense that hasn’t been as stout as it should be in the red zone, That was one thing we emphasized and worked our tail off in practice to make sure we were locked in”.

Other players have also talked about the fact that Tomlin addressed the defense leading up to the game and challenging them to stand up in the red zone, where they had previously struggled significantly this year, despite doing very well overall in getting off the field on third down.

I’m sure that Haden is not unfamiliar to being challenged. But right now, the way the season is headed, he is on his way to uncharted territory. The former Pro Bowler had never experienced a postseason game with the Browns.

The Steelers are shaping up for their fourth consecutive playoff berth, in good position for at least one home game, and perhaps even a bye week this year, as they enter the break tied for the best record in the AFC, with one victory in hand against the Chiefs, and a game yet to play against the Patriots.