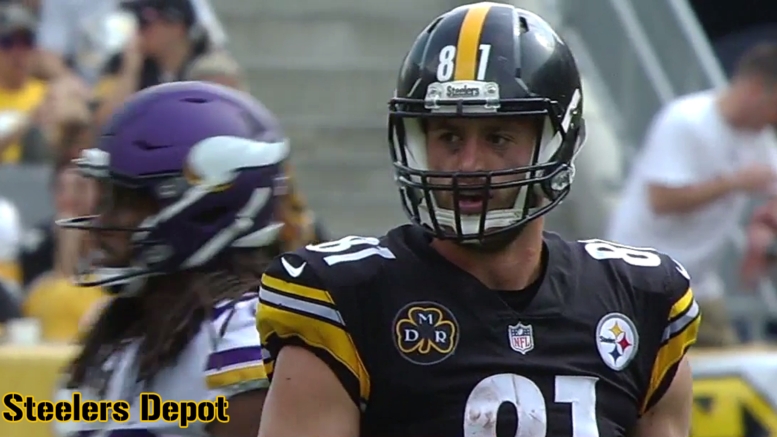 Over the course of the past two games, Pittsburgh Steelers tight end Jesse James has not caught a single pass. There were only two games throughout all of the 2016 season, including the playoffs, in which the tight end failed to catch at least one pass, so this is the first time since receiving significant playing time that he has failed to catch a pass in consecutive games.

Does it really mean anything? It’s hard to say from where we currently stand. It’s something that requires further data in order to draw an appropriate conclusion. But it is for the time being, at the very least, an interesting fact to note.

I did talk just yesterday about the fact that James’ role is seemingly being reduced. On Sunday, newcomer Vance McDonald played a significantly higher percentage of the team’s snaps during the first half, and the third-year tight end’s snaps only boosted in the second half after the former 49er left the game with a knee injury.

Meanwhile, McDonald was targeted three times in the game, catching two passes for more than 30 yards. The one target that he did not catch, admittedly, was a catchable ball on a back shoulder throw in the back of the end zone, but clearly the coaches believe he has more to offer in the passing game.

James has not simply failed to catch a pass; he has failed to garner a target. That does require a minor qualifier, however. He was not targeted on Sunday, but against the Chiefs, he did get a target on one play that was nullified by a penalty. He did not catch it.

The former fifth-round draft pick caught six passes for 41 yards and two touchdowns in the season opener; since then, he has not been nearly as involved in the passing game. He did catch four passes for 27 yards the following week, and he has three receptions of at least 15 yards—though none of 20—but he is still averaging 8.3 yards per reception.

Through the first five games, he has come up with 18 receptions for 151 yards. His 18 receptions are still tied for the third-most on the team, behind Antonio Brown and Le’Veon Bell, and tied with Martavis Bryant, though rookie wide receiver JuJu Smith-Schuster is now just one catch behind him.

Ultimately, I don’t think even the coaching staff really knows at the moment how the situation will play out at tight end. Nothing is set in stone, but they clearly would like to see McDonald take on a bigger role. That does not mean that there is no place for James as a contributor at the same time.