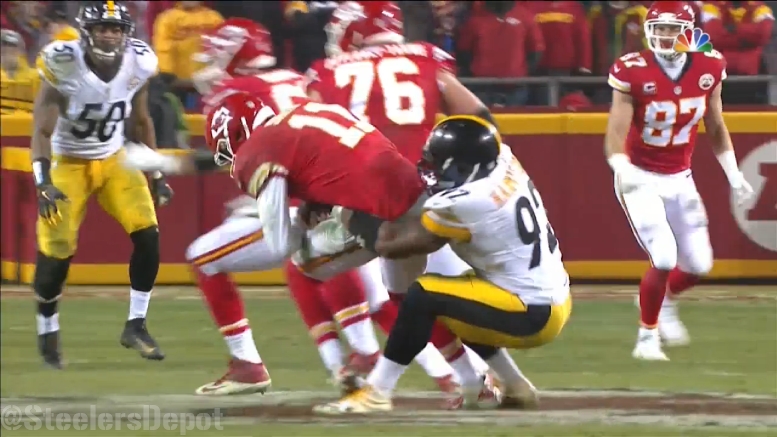 After spending the last two Sundays on the Pittsburgh Steelers inactive list, veteran outside linebacker James Harrison is currently scheduled to dress and play against the Kansas City Chiefs this weekend. Steelers defensive coordinator Keith Butler was the first to break that news on Thursday during his weekly talk with the local media.

“It’s always good to have James Harrison when you play Kansas City to let their offensive tackle see him. I’ll just say that,” Butler said Thursday when asked about the status of Harrison for Sunday’s road game against the Chiefs.

Butler was asked if that meant just seeing Harrison on the sideline in uniform, or something else.

“No, see him and I’ll leave it at that, all right. You can imagine what might happen,” Butler said.

On Friday, Harrison talked to the local media and he was told what Butler said Thursday about him being in uniform against the Chiefs.

“That’s what I heard,” Harrison said. “Well see. I’m wearing a uniform this week. I won’t be out of uniform.”

Harrison was then asked if he knows what his role will be Sunday.

Fisher, the Chiefs former first round draft pick in 2013, has struggled somewhat against Harrison since entering the league. In the four games that the two players have squared off in since 2014, and that includes the Divisional Round playoff game last season between the two teams, Harrison has recorded 2.5 sacks, and 6 total quarterback hits to go along with several unofficial quarterback pressures.

If that’s not enough, Fisher was called for holding Harrison during a two-point pass play attempt with 2:47 left in last year’s Divisional Round playoff game between the Steelers and Chiefs. That holding call negated a would-be game-tying two-point conversion and the Steelers held on for the win.

With Harrison only playing a total of seven defensive snaps so far this season it’s tough to speculate how much playing time he’ll get Sunday in Kansas City. With that said, the Chiefs are expected to run the football quite a bit against the Steelers base 3-4 defense on Sunday and that likely means a heavy dose of rookie running back Kareem Hunt, who currently leads the league in rushing. The Steelers base 3-4 defense has struggled at setting the edge consistently in their first five games of the season so it would make since for Harrison to play quite a bit against the Chiefs on Sunday at right outside linebacker in order to help in that area.

Oh yeah, and Harrison can also get a few runs at Fisher as well in pass rushing situations.