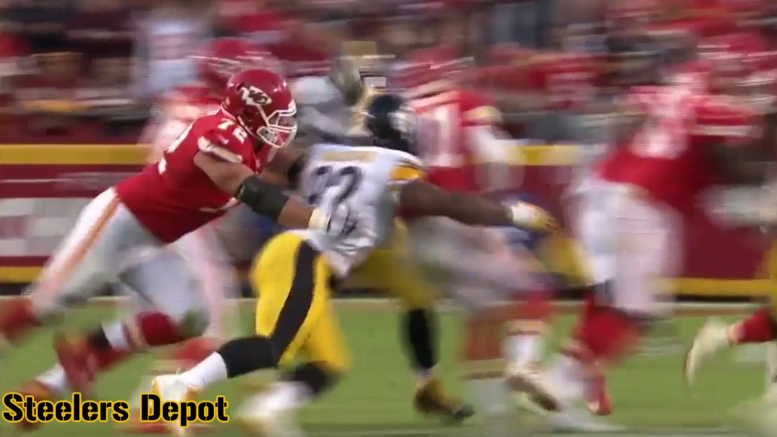 While the Pittsburgh Steelers spent much of the evening dominating the previously-dominating Kansas City Chiefs on their home turf, they repeatedly failed to put the game away early, and so, when it came down to crunch time, they needed somebody—anybody—to come in and close it out.

The Steelers did rotate their outside linebackers on the day more than they have before, but while I don’t have an exact snap count in the minutes following the game, it didn’t seem as though Harrison played much.

But the coaching staff put him in the game when the Chiefs got the ball back with 1:42 to play and 56 yards to go to take the lead. The defense had done well in shutting out Kansas City’s offense—they had just one first down and single-digit yards in the first half—but it’s always hard to close out games.

Alex Smith completed one pass on that drive for 16 yards that put his team on the Steelers’ side of the ball, to the Steelers’ 40-yard line, but after two incomplete passes, it was Harrison who dipped the corner around left tackle Eric Fisher, dropping the quarterback for a loss of eight yards.

That put the Chiefs into a fourth and 18 situation, a desperation play with minimal chance of success. Smith simply threw the ball up, and had no red shirts near where the ball landed. It was incomplete, and the Steelers were suddenly in victory formation, dethroning the presumed best team in football, on the road.

And Harrison played a critical role, albeit a small one, in finishing the task at hand. Dropping Smith on third and 10 from the 40-yard line in a six-point game, it was a situation tailor-made for somebody to step up, and it was almost too good to be true for it to be the 39-year-old former Defensive Player of the Year, picking up his first sack of the season.

‘Deebo’, as his teammates call him, was not even dressed for the past two weeks as a healthy scratch because of the way that the Steelers had been using their outside linebackers—that is, not rotating them—and the fact that he was not playing on special teams.

But, as Mike Tomlin said before the game, they liked the matchup against the Chiefs’ left tackle, Eric Fisher, against whom the veteran outside linebacker has had a lot of success, so they gave him the helmet and seated Arthur Moats, who was a starter on the punt coverage unit.

For the game, Harrison finished with three tackles and the sack, but one could argue that you could also give him the W for this one. Of course, the Chiefs would have still had to get into the end zone. But the old man made sure to make that task as difficult as possible.