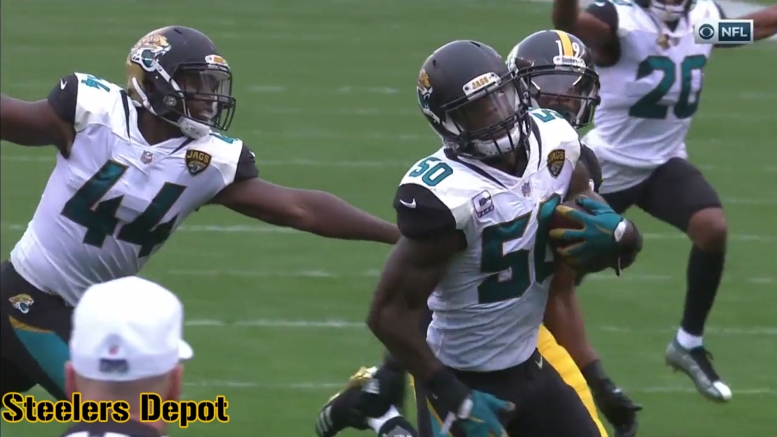 You know…one of the things that really has seemed to have gotten lost in all the furor of the infamous five-pick game is the fact that the Jacksonville Jaguars on the whole played a damn good defensive game, and they certainly look to be a very legitimate unit as a whole on that side of the ball.

Their two cornerbacks—2016 top-five draft pick Jalen Ramsey and 2016 Pro Bowler from Houston, A.J. Bouye—have both been playing very well this season, and they both stepped up to the plate on Sunday against the Pittsburgh Steelers and Ben Roethlisberger.

Ramsey himself had a beautiful interception of his own to kick things off, and then he batted another down to his teammate, Barry Church, who returned it for a touchdown. And let’s not forget about the former Browns safety, Tashaun Gipson, who, oh yeah, knows Roethlisberger pretty well.

Gipson picked off Big Ben twice in the game. The first one wasn’t all that difficult. All he had to do was have the cornerback in coverage—accidentally—trip wide receiver JuJu Smith-Schuster as the rookie tried to squeeze in between two levels of coverage.

But the second one was all about recognition. With the Steelers sending two vertical routes heading into the end zone, Gipson was in coverage on the inside route, but inside of flipping his hips and turning his eyes upfield nearing the goal line, he kept his eyes on the quarterback, and was able to make the adjustment and come underneath the deep pass for the dagger fifth interception.

And oh yeah, that first interception was aided greatly by pressure up the middle. Roethlisberger was hit as he threw and had to let go of a hurried pass from an off-balanced stance. Another of his interceptions was tipped at the line of scrimmage, one of two passes that Jaguars got hands on at the line.

And their coverage—not just the cornerbacks, but the linebackers too—showed speed and aggression, getting their hands on a number of balls on the day. I recall one diving deflection in particular from Bouye on what could have been a big play down the field for Antonio Brown.

The pressure throughout the day force Roethlisberger to try to get the ball out quickly, and he was hit several times, beyond the couple of times that he was brought down for sacks. The running game didn’t find much room to run more often than not despite the fact that the Jaguars technically came into the game with the worst run defense in the league.

This is not intended to absolve the Steelers, Roethlisberger, or anybody else of their poor play, but it would simply be an insult not to acknowledge the fact that the Jaguars defense also played a pretty important role in making that game look as ugly as it did. That is a unit clearly on the rise, from what I can observe.