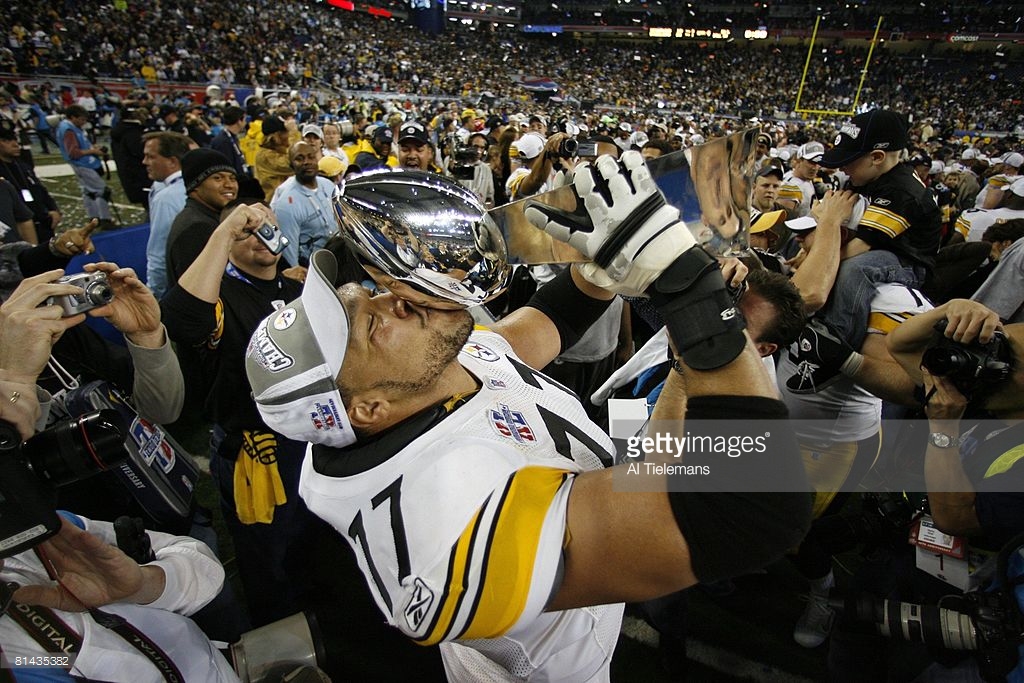 Bringing you another Pittsburgh Steelers’ interview courtesy of our good friend Ron Lippock of the Pittsburgh Sports Daily Bulletin. Today, Ron talks to former Steelers’ starting left tackle Marvel Smith. The two discuss Smith nearly getting drafted by the Bengals, his unique approach to the o-line, and his health post-football.

First, tell me what you’ve been doing with yourself since you retired?

Well, I’ve been keeping things low-keyed. I’m not on social media, I don’t know what’s going on with anyone except for some of the guys I keep in touch with. The big thing is my family. I retired at thirty. My kids now are nine, six, and five. Taking care of them is a lot harder work – no days off. I used to look forward to the summer – now it’s the hardest time of my life. But I love it. I like having that – I didn’t have a father around me when I was younger.

I wanted to take advantage of the opportunity to be with my family. I played long enough to accumulate the wealth I needed so I can take care of my family, Now I can help my wife and be with the kids. Less is more.

How  is your health – I know your back was an issue for some time?

I’m in physical therapy for my back. I had my third surgery three-and-a-half or four years ago. It effects everything I do. It limits what kinds of things I want to try and do. I have a performance facility for players but while I can work with players I really can’t demonstrate all that I want to for people.

I finished football at thirty. I suffered a lot of depression when I was done. My youngest was only one then and my wife was pregnant. After that much time I didn’t need to keep pushing my body. But I didn’t have anything to fill the void when I played. Nothing to always pressure me to be on my “A” game. I most cherished that drive. I didn’t play to be recognized. I wanted that competitiveness and to perfect my craft. Now I had nothing to replace that.

People used to say I was really mean when I was playing. I couldn’t switch that off and that doesn’t work in the real world. I would wake up mad at the world – looking to be tested. I didn’t want my youngest growing up in that environment. I needed to change, That’s when I started studying scriptures – and that completely changed my life. I was so thankful I didn’t go into counseling as some do – they never end up leaving counseling. Now, Bible study and my family are what drive me. The performance facility – I don’t have much time for it. Billy Miller – the tight end from Houston – he approached me to partner with him on the facility. It’s still around but I just don’t have much time for it. I don’t prioritize it.

Tell me a bit about what skills help you as you work with players now?

I always looked at playing as a job. I never had a problem helping other guys. Guys like Larry Tharpe helped me out – told me he knew I could do things he couldn’t do. I was always on the field before everyone else working on my skills, and later, helping others as well. I wasn’t very outspoken – I wanted to help others but was more focused on working on my own game. I was a sponge – I took from other guys.

No one else used the stance I used. I had lazy hands when I came into the league, so I kept my hands up like a boxing match to help with my punch. That’s why I used the two-point stance others didn’t – no coaches taught me that. When I work with guys now, I can see and work with their skills. I loved Coach Grimm – he didn’t care how you did it. Other coaches say do it like this and that pigeonholes guys. Instead. it’s good to soak things from other guys and because I did that I can show guys how to do it their way.

Stepping back some – tell me a bit about being drafted by the Steelers.

I was real surprised the Steelers drafted me. I met with Cowher at the combine and he had me draw up two plays for them. But I never heard from them afterwards. It’s funny. When you leave the combine you get a duffel bag full of NFL apparel. I gave it all away but was left with one item – a Steelers t-shirt. I used it every game I played under my pads! I figured I’d be a late first/early second round pick. I didn’t care what team. I just wanted to get drafted.

I remember when the Bengals line coach called and said they would take me – that was the one team I didn’t want to go to. Fortunately they didn’t draft me. Cowher called me after the first round and asked if I wanted to be a Steeler. It was one of those moments – you know it’s coming but it’s unbelievable when it happens. I was on the West Coast my whole life too – I barely knew where Pittsburgh even was!

I was going to ask you about that – how hard was that adjustment to the East Coast?

It was a lot to get used to. I played at Arizona State – it got to 128 degrees. My place in Pittsburgh fortunately was only two blocks away from the South Side facility. I remember when we got a big snow – no footprints anywhere it was so much. I stayed home but got a call thirty minutes later asking why I wasn’t at practice! I didn’t think anyone was going anywhere.

Fortunately being only two blocks away, I could walk there. I grew to love playing in the colder weather. The ten degree weather was better than playing in the heat. The cold weather hurt more – feet get numb….but it’s easier to play in that versus the heat and it gives you an advantage over the West Coast teams.

Tell me a bit about the atmosphere there?

It was like a college atmosphere. It was rare that they’d bring in free agents – they almost always re-signed players. I remember there was a bunch of us signed to similar contracts at close to the same time. There’s no one thing that I remember – it was more about the growth for all of us to get to the point where we could win two Super Bowls. The organization was great to keep the core together for five-to-six years. We all knew what to expect from one another.

How  hard was it to leave Pittsburgh?

My last year, the team was looking to re-sign me. But I started feeling the same symptoms on my right side that I had been feeling on my left. I was sitting with General Manager Kevin Colbert and they had an offer for me for a few more years. I couldn’t imagine making it to the end of that contract. I just couldn’t accept it – I didn’t want to be one of those guys just trying to get everything I could. That’s not what I was about. I only played five games that season. I knew I had to leave with my contract coming up – I just figured that I wouldn’t play any more unless I got an offer from a West coast team.

I was lucky to get an offer from San Francisco but I just couldn’t finish there.

What advice would you give younger players entering the game today?

It’s ingrained as a player that you put the team before yourself. The team is loyal to you to an extent but they have no real problem replacing you. Even after my first surgery and I had proven myself as a player, with a new coach coming in I felt I had to rush to come back to prove myself again. I’m not saying you don’t sacrifice yourself to some extent – but make sure that on and off the field you take care of yourself.

Most players play three-to-four years – I played ten. But even ten is such a minute period of your life and it impacts the rest of your life. Back then we knew little about concussions. Now, I love it when I see guys make career decisions based on their families and own health.