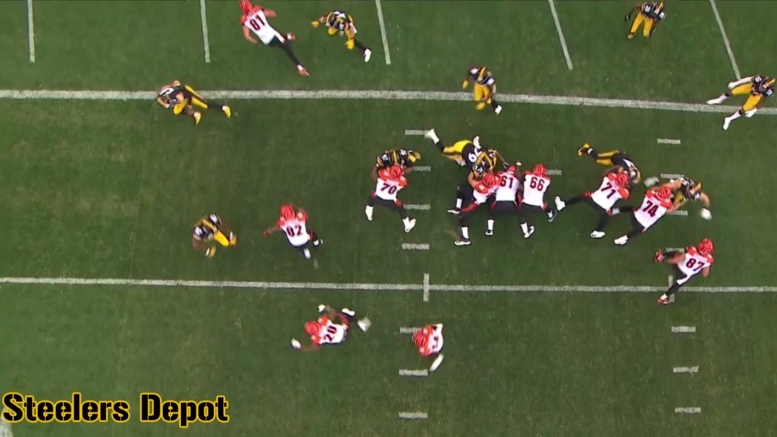 One of the most disconcerting aspects of the season for me so far has been the sheer ineptitude of the Pittsburgh Steelers’ goal-line defensive sub-package. They have used it on five plays this season. They have allowed five touchdowns in the package this season. No matter how bad you are at math, it’s hard not to realize that that is bad.

And it was about as bad as ever on Sunday against the Bengals. Cincinnati picked up a nine-yarder on an out route down to the one yard-line to set up fourth and one, and the Steelers countered with this sub-package, quickly allowing the score, which at the time tied the game.

For those who might not be familiar with the nuts and bolts of this package, the Steelers use four defensive linemen here and one to two extra linebackers in order to bolster their standard front seven, bringing in extra inside linebackers. They have at times used three inside linebackers and two safeties, but have mostly gone with four and one, Sean Davis being the lone safety.

On this particular play, L.T. Walton checked in at defensive tackle and L.J. Fort and Tyler Matakevich set up on the back end. Both were on the weak side of a three-tight-end set, including a tackle-eligible, facing 23 personnel with a fullback.

Both reserve linebackers bit hard on the inevitable play-action motion from quarterback Andy Dalton, at which point the weak-side tight end, Tyler Kroft, had already gotten well behind them for the pitch-and-catch score, I believe his third touchdown filling in for Tyler Eifert this season. He didn’t even sell a run block at all.

The Steelers have allowed 12 touchdowns as a defense through the first seven weeks of the season. Make no mistake, those are good numbers. But the fact that five of the 12 have all come against their goal-line defense is just straight-up ugly.

Granted, these plays always have a high chance of scoring, as they usually come from within one to three yards of the goal line. But a 100-percent failure rate on a not insignificant sample size signals that something really is just not working.

The Steelers were beat out of 23 personnel week one against the Browns, allowing DeShone Kizer to sneak around the left edge, running over Matakevich. A week later, again facing 23 personnel, they were beaten on the fullback dive, the line giving up penetration and Vince Williams mistiming a jump.

In Chicago, it was the prelude to Sunday’s score to Kroft. Rookie tight end Adam Shaheen was let loose against 23 personnel with Matakevich and Fort biting on play action. Three weeks in a row. Then Leonard Fournette leapt over the pile from two yards out.

The Steelers ran goal line one other time in Chicago. Mercifully, the Bears false started. This was at the end of the half with no time remaining, so they settled for a field goal instead. But you just know that they would have scored.