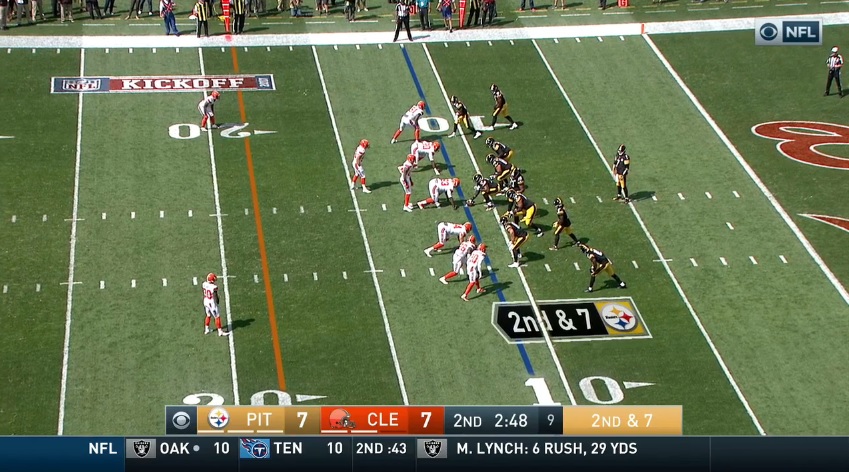 I need to throw up a caveat before diving into this article. Note that I didn’t say “fix” the Pittsburgh Steelers’ offense. But this idea would help and the Steelers are clearly sending out an S.O.S. after these first five weeks. So it’s time to do something different.

Much of the preseason talk was the weapons the Steelers have at receivers. While that group has underwhelmed, then again, who hasn’t, it’s still a talented bunch. But unlike what we speculated at the time, Todd Haley hasn’t used  four receiver sets often. According to our charting, before this week, they’ve only done it 11 times.

The interesting part is that it’s been a success, a word that hasn’t gone together with this offense very often so far.

In four receiver sets, which have all been 01 personnel (0 RB, 1 TE), Ben Roethlisberger is 9/10 for 135 yards. Most of the damage came against the Cleveland Browns Week One but it’s been sprinkled in against the Minnesota Vikings and Chicago Bears, too.

The sample size has been small but it’s been effective, making it worth exploring on a larger scale. It’s probably time to end the Justin Hunter experiment. He’s done nothing in two weeks and looks as advertised. All bark, no bite. Eli Rogers can get his hat back and be part of that four receiver set, working inside with JuJu Smith-Schuster and Martavis Bryant/Antonio Brown on the outside.

It could also help open up the run game. I’d rather run this out of 10 personnel, meaning a running back instead of a tight end. I’m not sure what the numbers look like the past two weeks, the Baltimore Ravens’ game probably changed things quite a bit, but Dave Bryan did the legwork a couple weeks ago. At the time, the Steelers were running the best out of 11 personnel, the average and success rate only decreasing when things got bunched up.

Using four receiver sets will spread the field horizontally and lighten the box for Bell, opening up running room. In the pass game, you’re putting all your best weapons on the field, creating isolated matchups, and more options on the field for Roethlisberger to target.

Jesse James has been impressive, there’s no question about that. Much more than what most, myself included, expected him to be. But he’s not someone who is going to get open. Eli Rogers can.

I’m not saying I’d use this all the time. But it’s worth sprinkling in, especially on 3rd down, where the team ranks middle of the pack. Maybe ten times a game is all it’ll take. The changes in this offense probably don’t need to be as dire as they’re made out to be. A tweak here, a tweak there. Four receiver sets are a good first step.