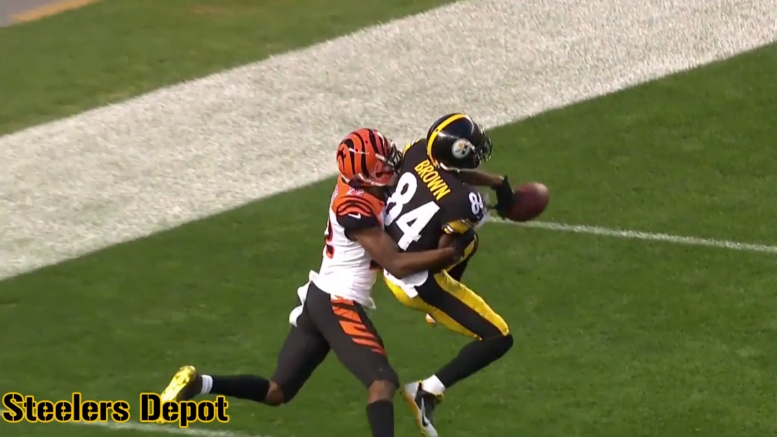 I don’t quite know why, but for some reason the Pittsburgh Steelers’ failure to find much of any success in recent years while using play-action passes has fascinated me. I wrote a number of articles about it during the offseason, in fact, much to the chagrin of some.

But it just occurred to me that I haven’t ever actually taken the time to properly present the nuts and bolts of their play-action attempts in an article, so that was the germ of the idea behind the article that you are now reading.

So let’s have a look-see, shall we? By my numbers, the Steelers used play action on five of 25 dropbacks on Sunday, which is actually a high proportion of throws at 20 percent. Problem is it didn’t do a damn thing for them. One completion for three yards on second and seven.

So how bad was it, really, and now close were they to actually finding success? Let’s take a look.

Their first attempt from play-action was their lone completion from the look, late in the second quarter. On second and goal from the seven, Ben Roethlisberger lined up under center with three receivers on the field. Off play action he threw to Martavis Bryant, but he was immediately tackled after three yards. William Jackson III did good job on this play of not getting picked playing in man.

Actually, you will be seeing a lot of the Bengals’ 2016 first-round draft pick here. Early in the third quarter, he did an excellent job of sticking to Antonio Brown over the middle of the field and knocking the ball away in front of the receiver.

Later in the third quarter, Jackson drew Brown one-on-one on a go route, the defender never even registering the play action. Brown looked like he might have the jump for a score, but again, the talented defender played the pocket and won.

There was one play that could have worked. Perhaps even should have worked. Even later in the third quarter, Roethlisberger looked long for Bryant off of what he said was an RPO and was able to get behind the cornerback, but he didn’t turn around when he was supposed to, which prevented him from tracking it in the air.

Finally, in the fourth quarter, they actually ran play action with Terrell Watson on the field, but Roethlisberger was never able to get off a good pass with the Bengals blitzing heavily on third and one. He just had to toss the ball up and hope Brown could run under it.

The Steelers actually had some success last week on play action. This week, awful. What will Sunday’s game in Detroit hold?