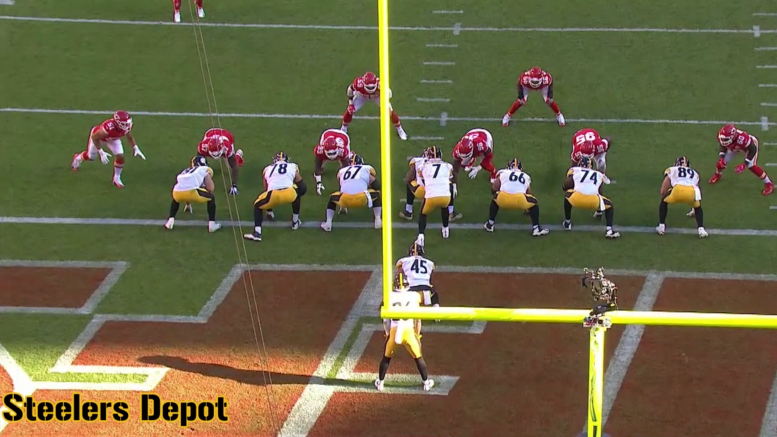 Over the course of the past three weeks, the Pittsburgh Steelers have committed heavily to running the ball in two of them, and in each of those two games, new tight end Vance McDonald featured prominently in the blocking schemes.

Sunday’s efforts as a run blocker—playing not far from half of the team’s snaps, for a change—were again significant, though he will probably remember it best for his 26-yard reception, the first catch of his Steelers career on his sixth official target.

That doesn’t deny that the bulk of his impact to date has been in the running game, and he contributed to a number of quality plays for the offense on Sunday. Take James Conner’s 11-yard run in the first quarter. While the attention on these counter runs is paid to the pullers, the front-end work also needs to be commended, and McDonald did a nice job of sealing the edge here.

On a 13-yard game for Le’Veon Bell later in the opening quarter, he initially down blocked, double-teaming with the other tight end, but then he went to find more work for himself and was able to push the safety out of the hole, which really set up the run.

Into the second quarter, on second and six, McDonald worked against Dee Ford off the offensive left side, helping Bell pick up the six yards to move the chains. It looks worse than it really is here, but Ford did win late in the rep and put him on the ground.

Later in the same quarter—on the same drive—the Steelers motioned him to the right side, then promptly pulled him to the left, able to put linebacker Reggie Ragland on the ground as Bell found space off the left side for 17 yards.

A player’s individual performance cannot always be judged by the end result of a play, though. Take this third-quarter run off right end on a pin-pull scheme. McDonald did a very good job of cracking inside from the play side. The play just never developed in front of Bell, resulting in no gain.

While the 26-yard reception was a welcome sight, the truth is that McDonald has already been a valuable contributor to the offense. Ben Roethlisberger said immediately after the game that he would hope to see him in a bigger role. We’ll see what next week holds for him.