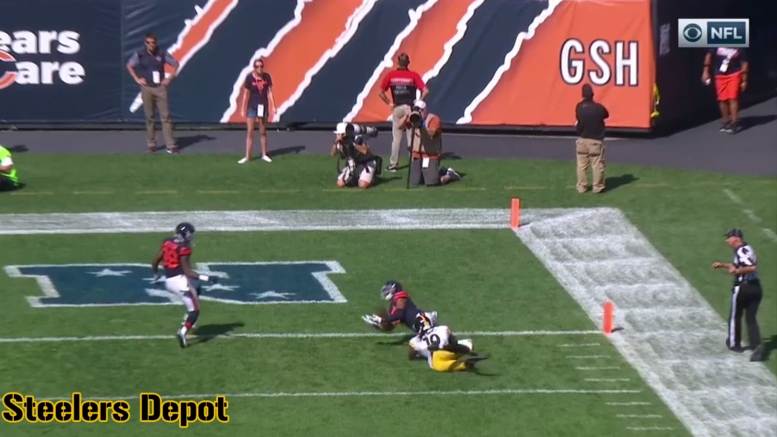 As promised, I began a mission this season to track specifically throws by Pittsburgh Steelers quarterbacks—ideally, every pass will be thrown by Ben Roethlisberger—that were not only poor—or necessary poor—but which by rights could have, and in many cases should have, resulted in a clear interception.

This informal ‘statistic’, such as it is, came to the forefront of my mind in particular last season after watching Roethlisberger return from injury against the Ravens in a game in which he could have easily thrown close to half a dozen interceptions, which is not reflected in his statistics.

I also keep track of things that don’t go his way, like batted balls, dropped passes, throwaways, and things of that nature, so it’s not about imbalance, but I do think that this aspect of the discussion is most worthy of deeper dissection, so with that in mind, I want to take a look at the turnover-worthy throws that I have uncovered through the first quarter of the season. You may agree or disagree with them at your liberty.

The first pass, unsurprisingly, came in the season opener, and it came on the play on which he actually threw an interception. In my notes for the play, I have written, simply, “deep ball underthrown, tipped from one defender to another”. I think that pretty much sums it up. He had a clean pocket, but couldn’t hit the throw between the coverage.

Ironically, his two cleanest performances were the two in which he threw an interception. In the season opener, his lone turnover-worthy play resulted in a turnover, while last week, he had no turnover-worthy throws, yet still was docked for one.

But through the second and third games, during which he threw no interceptions, he threw five passes that could have resulted in turnovers.

In the Vikings game, both came late in the first half with the Steelers trying to drive, in a three-play sequence. On first and 10, he had a clean pocket to throw from, but, from my notes, the cornerback cut off the route, with the ball bouncing off of his hands.

Two plays later, on third down, Roethlisberger understood the down-and-distance situation. It was toward the end of the half, with 49 seconds at the start of the play, so a long interception would not be a big deal. He went for it. He felt the pressure and tossed out a deep ball. It went clear over the head of Martavis Bryant, but it hung up long enough to give safety Harrison Smith an opportunity to track it and try to make a play on it. Had he actually done a good job of it, he could have come down with this one.

Roethlisberger had three turnover-worthy throws against the Bears, all in the second half, and the first two coming on back-to-back plays. The first, on second and 10, was on a go route for Bryant on which the cornerback did a nice job of cutting off the receiver. He ultimately had the ball go through his hands on this one.

On the next play, he not only felt the pressure, he had his left tackle walked back into him as he threw. He just tried to get off a pass to his slot receiver, but with the off-base throw it came out awkwardly, and the cornerback in coverage very nearly came up with the sliding pick. He did come up with the ball, but it touched the ground as he tried to secure it.

This would have been an impressive interception, and is easily the most ambiguous on the list, but truth be told, I wanted to find the match for the turnover-worthy throw metric that Pro Football Focus listed for him, and this play best represents a sixth turnover-worthy throw. This is more about having a discussion about these throws than it is anything else.

The final play in question came late in the game with under four minutes to play. On third and six,  Roethlisberger looked for Antonio Brown, trying the slip the ball over underneath coverage, but Kyle Fuller was well-positioned to defend the ball, even though he couldn’t secure an interception. He popped it up to put it in play, but the over coverage defender instead followed Brown out of bounds.

You don’t have to agree with every instance here—and note that I excluded a play on which he actually threw an interception—but I think even those who disagree with individual examples should be able to draw something useful out of this presentation; at the very least, I would hope, the role that luck plays often times in interception numbers, both in favor of and against the quarterback.