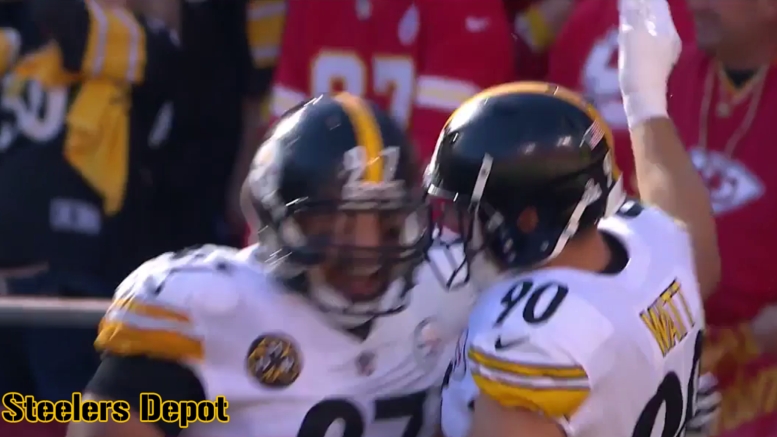 We haven’t talked a whole lot about the Pittsburgh Steelers’ most prized rookie, first-round outside linebacker T.J. Watt, in recent weeks. After getting two sacks and an interception in his first career game, he has gone a bit quiet, not drawing much attention to himself positively or negatively.

To that end, I thought it would be a good time to check back in with him and see how he fared against the Chiefs, during which he recorded just one tackle and no other statistics despite the fact that he continued to play the majority of the team’s snaps.

Obviously, failure to record statistics is not the same thing as failure to perform well, or failure to do your job. Watt clearly did not have much of an impact on this week’s game, but it was not because he was struggling.

He actually came close to making a play several times in the game. Some of them perhaps you could even qualify as missed tackles. Take for example the first play of the game for the Chiefs. He was on the back side of the run, but he nearly chased down Kareem Hunt for a loss in the backfield. The rookie, however, was able to escape his pursuit, gaining a yard.

Watt did get him a few plays later, however—after the Chiefs recovered a free kick stemming from a safety—on second and seven, on a passing play. Watt dropped into zone coverage and followed the back out to the flat, making the tackle after he gained only a yard. This was his lone statistic of the game, and not a bad one.

Late in the first half, he had another near miss, and this one you can much more clearly classify as a missed tackle, but you can also see how it set up the play altogether, the defense stopping Hunt for no gain on first and 10.

The rookie linebacker was quick to beat the left tackle to the inside. With Cameron Heyward doing the same to the guard, Hunt was stuck between a rock and a hard place. Watt was the one with the shot at the tackle, but while he missed, Sean Davis was there to clean it up.

Later in the game, toward the beginning of the fourth quarter, the Chiefs found themselves in the end zone. The ball went to Akeem Hunt—not Kareem Hunt—on an outside zone run right. Watt did a nice job of not giving up the sideline and forcing him to cut inside, though no defender was immediately there to stop him.

Watt certainly still has a long way to go, and I wouldn’t object to James Harrison being more heavily rotated in, but he is making progress.