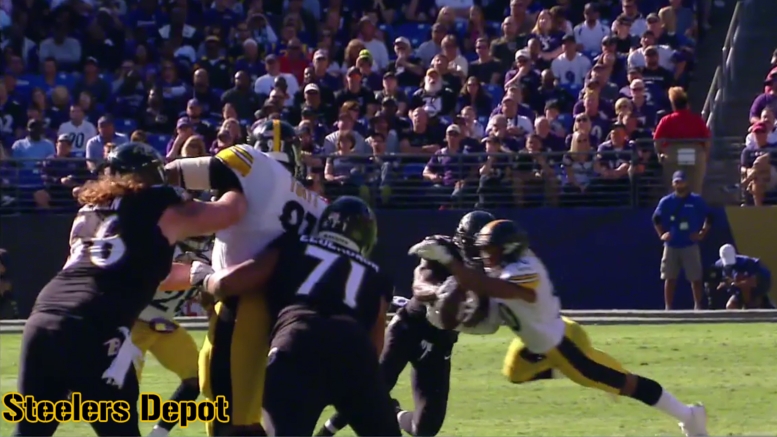 One of the areas of the defense that the Pittsburgh Steelers were likely keying on when they drafted inside linebacker Ryan Shazier was in coverage. While it took him some time to develop into that role as a coverage player, he has made major strides in that area over the past year and a half.

Sunday’s game was a good example of that. While he gave up some receptions, none of them did much damage, and he contested a couple of passes that were very tough receptions, breaking up others with his physicality. So let’s review some of his work in coverage from Sunday’s game.

The funny thing is that it didn’t start out well, actually getting sucked inside off delayed action on a crossing route very early in the game—but this was the same play the Ravens would later try to run that got Shazier his interception. He read the cues and remembered what he saw earlier on, and that helped him get into position to make a play.

Later in the game, early in the second half, Joe Flacco tried to find Mike Wallace over the middle with Shazier on zone coverage. As he read the quarterback, he was able to break on the throw quickly and that there quick enough to put a hit on the wide receiver that forced him to lose the ball.

He and Benjamin Watson had something of a battle between them on the day. He was the receptor on that first pass above, and here he just gets the better of Shazier on a very well-placed pass from Flacco that the linebacker still nearly is able to recover and reach to break up.

Even more impressive, for both players, was an early reception in the fourth quarter. You might recall this as the play on which Watson pinned the ball to his thigh a reception. That is because Shazier actually broke up the pass initially, but the veteran tight end was able to keep his concentration. Under normal circumstances, this goes down as just a pass defensed, honestly.

But it was on the next play that Shazier got his revenge, peeling back on the crossing route and finding himself in perfect position for an interception that he made look rather effortless.

He later ended the Ravens’ subsequent drive as well after he showed impressive elevation to get a hand on this deep target, which was picked off by Mike Hilton and returned for a net gain of four yards beyond the original line of scrimmage.

And just to cap things off, the Pro Bowler put an exclamation mark on his day in coverage by doing to Breshad Perriman what he did to Wallace, putting a big hit on him trying to reel in a pass over the middle and causing the ball to pop loose.

If Shazier continues to play this way, then the pass defense truly has the potential to be a strength all year. But that also rests on his shoulders, perhaps especially by keeping those shoulders, and the rest of his body, healthy and on the field.