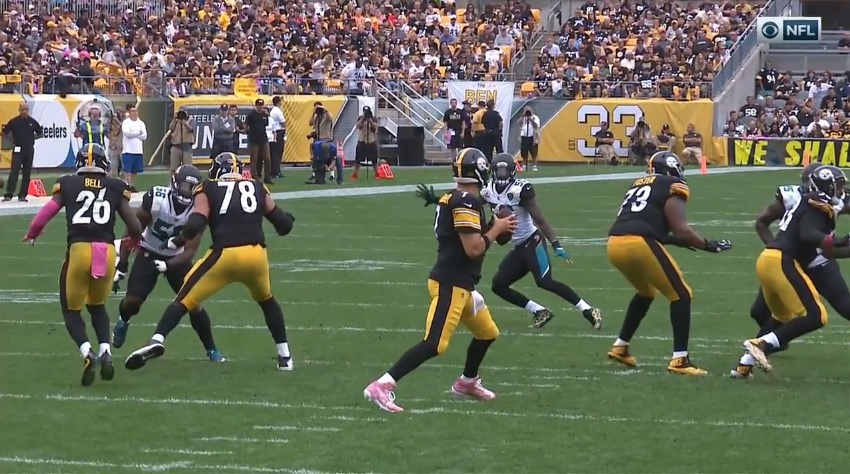 Without the All-22, it’s impossible to breakdown all five of Ben Roethlisberger’s interceptions in one evening. We certainly will during the week. But for now, I wanted to look at the second INT he threw, the first pick-six that got the ball rolling for the Jacksonville Jaguars.

To sum up, on 2nd and 11 from their 22, Roethlisberger tried to hit Antonio Brown on a slant. The pass was tipped by NT Arby Jones and picked by LB Telvin Smith. How it happened is much more interesting. One issue is that Roethlisberger has been forcing some of his slants in recent weeks, including twice in last Sunday’s win over the Baltimore Ravens.

The first one resulted in a batted pass, just as the Jaguars did on the interception. Three step drop under center, throwing the slant to the field. Defensive end Willie Henry reads the short drop, anticipates the throw, and bats the pass down.

Similar situation on this throw. 2nd and 14 from the Steelers’ 26. Boundary throw on a slant/flat combination to AB. The throw is complete but the window is tight, the MIKE linebacker nearly able to squeeze it and make a play on the ball. And again, another short drop that tells you the ball is coming out quickly.

The read isn’t wrong but it was a tough throw. One you know the next defense is hoping they can capitalize on.

On the interception against the Jags, it’s a similar down/distance as the second play. 2nd and 11 from the Steelers’ 22. Read the drop of the QB, another three step drop out of the gun, and you know the ball is coming out pretty quickly. For nose tacke Arby Jones, who knows the pass down, he knows there’s no need to rush. He’s not getting to the QB. Ramon Foster said he was spying. From Jacob Klinger.

“He spied, he spied, he spied. And he wasn’t rushing. He just jumped and tipped the ball. I didn’t expect it. Heck, I didn’t see it on film. I didn’t know he was going to do it. I guess he was just — he couldn’t get to the quarterback and he just played around.”

So that creates the tip, step one to the interception. 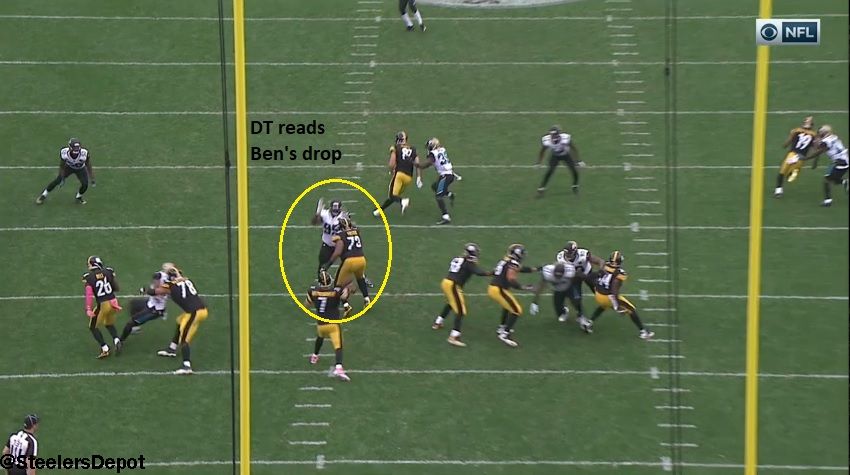 Smith begins to widen as Le’Veon Bell releases but Bell is asked to chip the RDE, aiding Alejandro Villanueva. That lets the linebacker settle, now not having to worry as much about Bell out-leveraging him to the flat. When the ball gets tipped, he’s in position to make the play. 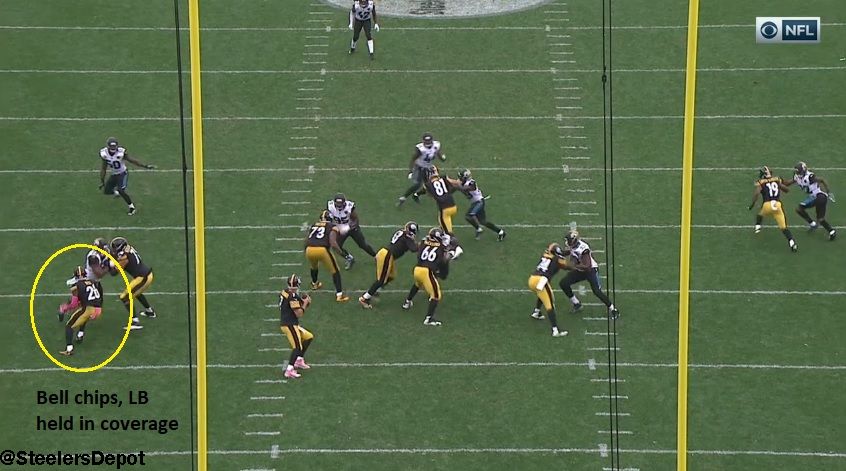 Interceptions aren’t always back and white. It isn’t just because one player is bad. More often than that, there’s nuance to each play and layers for why they fail. So to sum up.

1. The Steelers were predictable with the concept. Down/distance/formation created the tell.

2. The chip by Bell kept the linebacker from widening, creating the opportunity.

This one is probably more on Todd Haley. Doesn’t excuse Roethlisberger’s terrible day, it was still bad, but it wasn’t all on him either. Hopefully the Steelers can run a variation off it, a sluggo or add another route to the concept, to avoid some of that predictability that could’ve gotten them into trouble a week ago and ended up doing so yesterday afternoon.