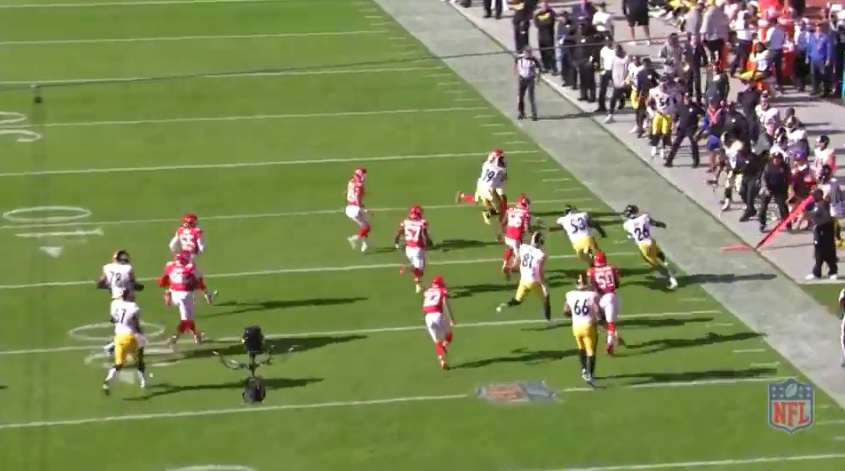 The Pittsburgh Steelers had easily their best rushing attack of the season in Sunday’s victory over the Kansas City Chiefs. They were able to get beyond three yards and a cloud of dust, ripping off big run after big run. After times, the difference between those decent, 5 or 7 seven yards and the excellent ones of 10+, come from the receivers doing their job as blockers.

So while the offensive line was dominant, we’ll have a separate post on that tomorrow morning, you have to hand it to the receivers for the effort and execution. Couple of plays to reference.

As you’d expect, JuJu Smith-Schuster had another excellent game as a blocker. No surprise, he’s already their best blocker and it isn’t even close. Has the size and more importantly, physicality and effort to thrive.

Here’s a pin/pull scheme. Maurkice Pouncey and David DeCastro help open things up but check out JuJu’s downfield block on the corner. Doesn’t let him close the edge as Bell rips down the right sideline.

Or here, where you don’t see a lot of receivers line up. Fit off-ball between the tackle and tight end, cracking the linebacker and sending him to the ground. Then he works to the next level and chips the backside defensive end trying to come across. Leads to a solid pickup.

But it wasn’t all JuJu. Martavis Bryant stepped up to the plate, too. Similar to Smith-Schuster on the first clip, Bryant doing a great job stalk blocking the corner to keep the path clear (and check out that Vance McDonald pancake).

It showed even in the passing game. You can debate if this is a legal block or not, that’s not the point, but look at Bryant put in the extra effort to crack the DB at the end of this Antonio Brown catch. It doesn’t affect the play much but that’s sorta the point; Bryant still sacrificed his body to try and make a play.

Heck, even Brown got involved and he’s one of the league’s worst blockers. On this play, Brown realizes he’s not going to be able to crack the safety so he runs to try and help out in some capacity, stalk blocking the corner. This isn’t a great play, but it’s effort and much like me talking to girls in high school, we’re grading on a heavy curve (Uh, hi Marissa…so you like, things, right? *immediately starts sweating*).

Like run defense, run offense can be an 11 man job. And when you get contributions from your receivers like the Steelers did Sunday, your run game reaches new heights.