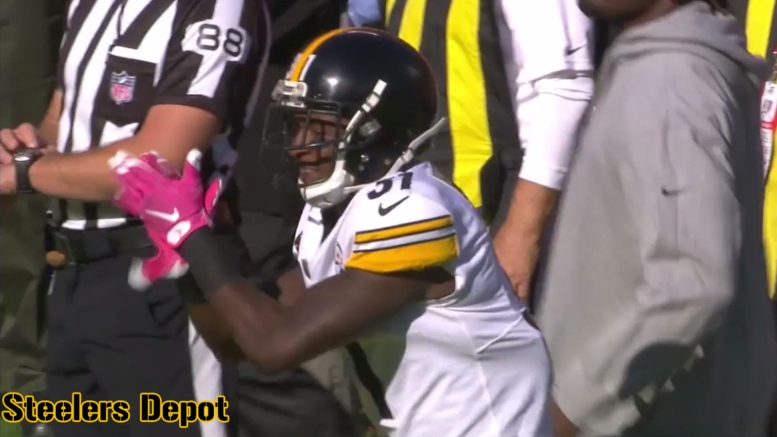 I think the quality that has most attracted fans to Pittsburgh Steelers first-year cornerback Mike Hilton is that, in spite of his diminutive size, he is first and foremost a football player. He does not play like he is 5’9”, 187 pounds, nor does he play like he is aware of it.

The Steelers’ starting slot cornerback plays with aggressiveness and physicality, and is very active both in run support and on the pass rush, continuing to show himself to be the complete player that we were given glimpses of during the preseason.

His bid to make the 53-man roster may have been cemented by his quality play on special teams, but by now, he has become a fixture on defense and has done nothing to give pause about having him on the field—in fact, he has largely kept William Gay off the field, reduced to a sparsely-used dime role.

I’m sure you remember the first one, if you were watching. Following a quick five-yard pass on first down to Tyreek Hill, the Chiefs put him in the backfield, perhaps thinking they liked the matchup with Hilton. But he easily avoided the slot receiver, sniffed out the pitch on second and five, and drove on him, tripping up the speedster for a loss of nine yards.

Later, in the third quarter, he was able to exploit his knowledge of the game to blow up a short screen pass to Travis Kelce. The Chiefs actually had the numbers, three to two, on the right side, but Hilton just did a fantastic job of acting so quickly on the play that he was able to get on the outside of the blockers and tackled the big tight end by himself.

He does run into problems from time to time, however, in the form of missed tackles, and he did miss a couple on the back side of the Chiefs’ two biggest plays of the game, starting with the 37-yarder to Kareem Hunt at the end of the third quarter.

He more than made up for that when he basically saved a touchdown on a blitz late in the game. The receiver was left wide open as a result of a blown coverage, but Alex Smith sailed his pass high due to Hilton’s pressure.

It’s weird going through such a large chunk of the season without much of a peep about wanting to bench some cornerbacks. But Hilton has made the slot position his own so far this year, and has even delivered some impact plays, including a sack, an interception, and now two tackles for loss.