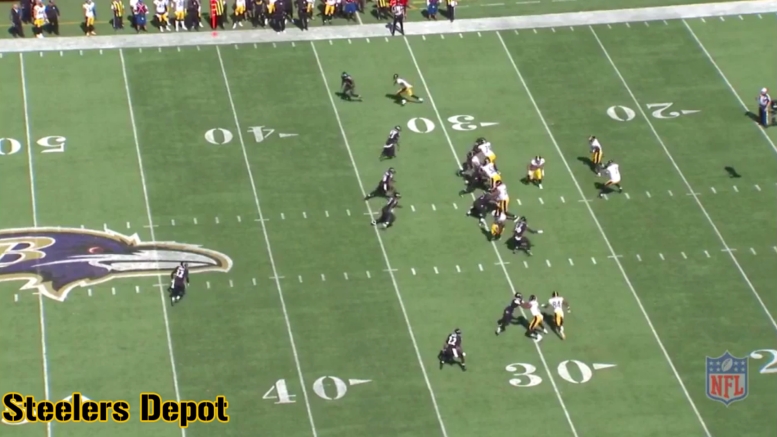 The Pittsburgh Steelers did not use a second-round draft pick on wide receiver JuJu Smith-Schuster just because he can bring something to the running game as a blocker—but it doesn’t hurt, either. And despite the fact that he is just 20 years old, he has already become a starter, in part because of his versatility and his skill set.

And just so we’re clear, Smith-Schuster is far from just a blocker so far this season. He already has eight receptions on the year—after seeing no targets in the first game—for 102 yards and two touchdowns, including three receptions of 15 yards or more, with a long of 25.

But while he still has work to do as a blocker, particularly when it comes to finding and sticking to downfield blocks, his work in this department is hard to miss if you’re actually watching him during the game, and that’s something that I wanted to take note of here.

His ability to block is one of the reasons that they have him in the slot so much, and they had him doing it early, on the second offensive play of the game, asking him to reach strong safety Tony Jefferson, playing up in the box. Maybe he gets away with a little hold here, something he has to watch given his three blocking penalties already, but it’s still a nice effort overall.

Early in the second quarter, the Steelers bunched him and Antonio Brown together on the left side to set the latter up for a screen pass. Smith-Schuster hit his block initially, but Brown tried to turn the ball to the outside initially, where the outside corner still was, so as you can see here he had to work back inside, resulting in just a two-yard gain.

Though he wasn’t exactly a lead blocker very often, that never stopped him from giving maximum effort. A good example of his tenacity on work away from the ball can be seen below on a three-yard carry during the second quarter.

He also had more success blocking downfield this week than he had in previous weeks, as this example shows, sticking to the cornerback and sealing him off to the outside as the run eventually works in his direction early in the second quarter.

Though it wasn’t quite the Harrison Smith block, he did put an outside linebacker on the ground at the goal line. With Za’Darius Smith was engaged with Jesse James, Smith-Schuster dropped the edge defender.

And yet still the biggest thing to take away from all that we have seen from him so far, in multiple different areas, is the fact that he is just 20 years old. He was the youngest player to catch a touchdown pass in decades. We’re scratching the surface on him.