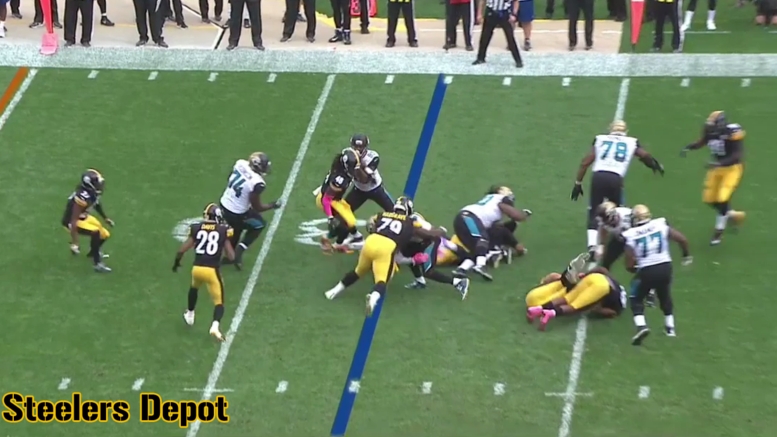 Who wants to hear about the performance of a nose tackle in the run game on a day on which the Pittsburgh Steelers defense allowed the Jaguars to rush for over 200 yards? Well, hopefully there are at least a few, because today I want to take a look at some of the work that Javon Hargrave did on Sunday.

What struck me when looking at the stat sheet after the game is that the second-year nose tackle was credited with no fewer than 10 tackles. While the majority of them were assists, it shows how active he was against the run—which was aided by the fact that the team actually stayed in the 3-4 front quite a bit.

Hargrave was credit with a number of run stops, including one early in the game, about five minutes into the second quarter. With the Jaguars facing a second and seven, the Steelers countered a 21 look with their 3-4 over front, the nose tackle tilted over the left shoulder of the center.

The line tried to stretch right, but Hargrave was too quick for the left guard, first cutting off the cutback lane, then chasing down Leonard Fournette for no gain when he had nowhere else to go.

There was a play late in the first quarter on which I noticed him lose. He was driven out of the hole by the center, turning him to the side, which left a hole up the gut for 12 yards. Not entirely his fault, but he didn’t help.

In the second quarter, with Jacksonville backed up at its own four, Hargrave and Cameron Heyward swapped gaps, and the nose tackle—through a bit of a hold—was able to come off his block and drive to his right to make the tackle for a gain of just two on first and 14.

Jumping ahead to the fourth quarter, the Jaguars were again back on their four-yard line on first down. He and Heyward pulled the same stunt, with the same results, only this time Hargrave made the tackle for a gain of just one.

After a bad turnover late and desperate for a stop, Hargrave and Stephon Tuitt delivered it on second and eight, limiting Fournette to a yard, immediately gaining the outside shoulder and controlling the play of the center.

I don’t fault Hargrave for any of the other plays of 10-plus yards in the game. On the 13-yarder that got the Jaguars’ final field goal drive going, he was held pretty clearly by the left guard, but it wasn’t called.