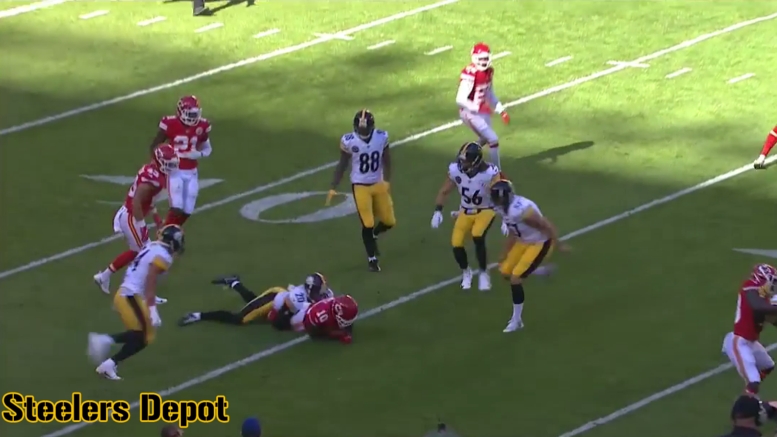 The Pittsburgh Steelers had by far their biggest test to date in the regular season when it comes to facing returners, having had to deal with the Chiefs and second-year Tyreek Hill. On the season, he has returned 13 punts, gaining 152 yards on them, averaging 11.7 yards per, with an 82-yarder that went for a touchdown.

On Sunday, against the Steelers, he returned three of five punts for 39 yards, with a long of 32, averaging 13 yards per punt. And that long return came at the most critical moment of the game. So let’s take a look at how the unit as a whole fared.

The first punt of the game came about midway in the first quarter, with the Steelers on Kansas City’s 41-yard line. Jordan Berry got off a solid enough boot of 30 yards to the 11-yard line with decent hangtime. But right from the start, it seemed as though the team was not prepared to face an aggressive returner who has only called for a fair catch on three of 16 opportunities.

The left-side gunner, J.J. Wilcox, was down there well in time. In fact, he ran up the field past Hill, looking back for the ball to land to try to prevent it from going into the end zone. But Hill never backed away, going up to field it, and was able to return it for five yards.

Early in the second half, they tried to kick it away from the returner, up the right sideline. Which is a fine approach, sending the ball out of bounds against a dangerous returner. But only netting 39 yards given where they were on the field is still a disappointment.

Later in the quarter, from the Chiefs’ 40, Berry sent one off a bounce into the end zone. Brian Allen was able to get down the field, but was unable to locate the ball in time to make a real attempt at saving it. But as you can see, Darrius Heyward-Bey drew a holding penalty.

In the fourth quarter, we have another example of the gunners being able to get down on the field, but limited in what they can do against an aggressive returner willing to field the ball in traffic. He was able to step into the return, though he was still limited to just two yards.

Finally, on the other side of the two-minute warning, Hill broke through, fielding a booming punt 62 yards down the field running toward his own end zone, over his shoulder, but Berry outkicked the coverage here, allowing the returner to cross the field from the right to the left, setting up a couple of blocks for himself for 32 yards.

That play gave the Chiefs the ball at the 44-yard line needing a touchdown to win the game. It took a strong showing from the defense to close it out, including a timely sack from James Harrison.