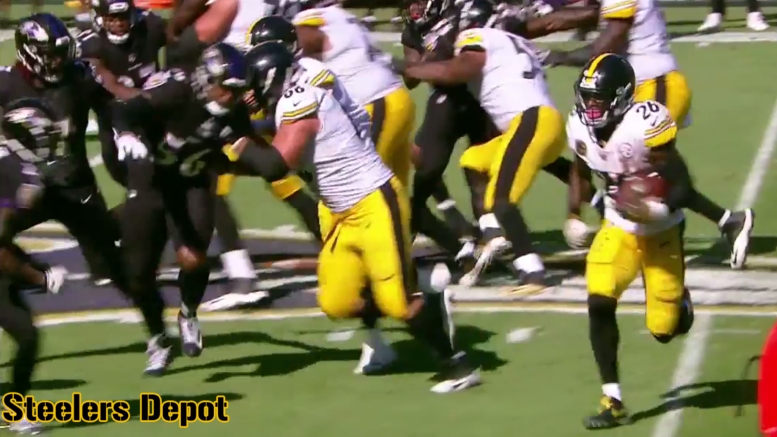 It has been a grind all season for the Pittsburgh Steelers to get the running game going. They finally were able to do so on Sunday, even if they only averaged a little over four yards per carry. Despite the fact that it was an overall solid rushing performance, it took some pulling of teeth to get the job done.

Or, to be more accurate, it took some pulling linemen, and as Dave Bryan pointed out earlier in the week, that was quite a common theme on Sunday, easily the most of the season, with both guards, and tight ends, featured on a lot of pulls to help set up blocking schemes in the run game.

It should be no surprise that All-Pro right guard David DeCastro was right in the midst of all of that, and his work on the move was featured on some of the Steelers’ biggest plays of the day, including their two explosive runs as well as one of their two rushing touchdowns.

They were able to get things moving on the ground about midway or so, give or take a couple of minutes, in the first quarter, and it wasn’t Le’Veon Bell, but actually the rookie James Conner, who was the first to really break through.

Providing some initial misdirection in the backfield from the back and fullback, as the Bears did to them the week before, DeCastro pulled to his left and was able to chase free safety Eric Weddle, playing up in the box, clear out of the hole, with he and fullback Roosevelt Nix opening up a lane for 23 yards.

The former first-round pick is all business when he is on the field, and especially when he is asked to go on the move. If you get in his way as he tries to carry out his assignment, he’s just going to block you, too, as Jesse James found out after he failed to crash down on the edge defender.

Early in the second half, he and the tight end actually worked together to seal off the defensive right edge, allowing Bell the space to work the run to the edge. It was enough to pick first-down yardage on second and seven.

As the game wore on, the line continued to break down the Ravens’ front more and more, and finally it cracked wide enough for another explosive play. With DeCastro and Nix leading the way, the right guard sealing off C.J. Mosley, the running back was up the sideline and gone for 21 yards.

It was a few plays after that that Bell capped off the drive, and pretty much the game, with his second rushing touchdown of the game, and as you might guess it featured DeCastro pulling. This time it was to the right out of an eight-man front, and once again it was he and Nix providing the alley for the score.

He did have two penalties in the game, but DeCastro is having a very good start to his fifth season. It’s quite early, but he’s certainly looking at potentially another trip to the Pro Bowl.